Inside the Golden Globe Awards After-Parties: U2, Matthew McConaughey and More Stars Celebrate 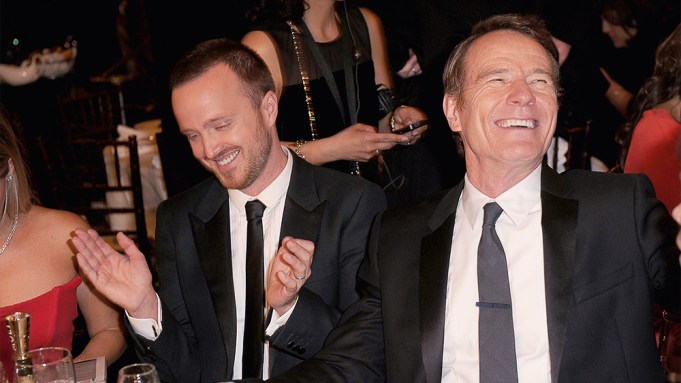 “The line at every party is AWFUL tonight,” one woman exclaimed wandering the Beverly Hilton lobby after Sunday’s Golden Globe Awards. Indeed the gala waits were longer than usual, up to an hour at some, but partygoers at InStyle/WB‘s annual bash didn’t seem to mind. The dimly lit dance floor shook, the Godiva chocolate bar was noshed and all of the Globe winners were floating on air. “I feel numb,” said “Gravity” helmer Alfonso Cuaron after celebrating his best director trophy. “Pleasantly numb,” he said with a grin. The star-studded bash also entertained the likes of Channing Tatum, Chris Pine and “Inside Llewyn Davis” star Oscar Isaac. Benedict Cumberbatch sipped martinis and cut a rug alongside pal Kelly Osbourne while “Lone Survivor” star Ben Foster waited patiently while fiancée Robin Wright posed for photos with Elisabeth Moss.

PHOTOS: All the Stars Inside the Golden Globe Awards After-Parties

Netflix and the Weinstein Co. celebrated their wins at Trader Vic’s as Harvey Weinstein held court next to Taylor Swift. But the highlight of the evening was when U2’s Edge came through the tented area. There was also a little bit of excitement as a couple got into an argument with security and were escorted out by a cop. Kerry Washington introduced her husband, ex-NFL star Nnamdi Asomugha, in a rare public appearance for the couple. (They are also expecting.)  “Parks and Recreation” cast members celebrated Amy Poehler‘s win, which Aziz Ansari said was “well deserved.” With him were Rashida Jones and Aubrey Plaza. Judd Apatow and wife Leslie Mann, Michael Sheen, Steve Coogan were among those checking out the scene.

The Fox party, on the roof of the Robinson’s May building, was completely decked out, with a dance floor and bar area on one level, a lower level with seating and food, and another higher level on the opposite side that was an outdoor bar, including a stuffed olive station. Fox execs Jim Gianopulos and Chris Aronson attended, as did the cast of “Modern Family” and surprise winner “Brooklyn Nine-Nine.” As soon as Julie Bowen entered the party, off came her shoes, and she walked around with her dress hiked up. When asked what he was feeling before “12 Years a Slave” won for best drama, Michael Fassbender said, “It was about to get violent, but then we won.” Alfre Woodard felt similarly on edge. “It’s like a trampoline with the HFPA, you bounce on it and everything goes up in the air and you don’t know who is going to land where,” she said. “I felt like we were on a mission with this movie. With all the Q&As we’ve been doing, people need to talk about this movie. I haven’t been stressed, but then again I am not Chiwetel or Lupita. More than anything, I just feel like the den mother. Plus we like each other.”

Youngblood Hawke rocked the room, but Matthey McConaughey ruled the roost at the NBCUniversal party atop the BevHilton’s parking garage. The “Dallas Buyers Club” star received well-wishers and huddled with filmmaker Jean-Marc Vallee and ex-Focus exec Andrew Karpen to toast the film’s two Globes. Hosts Amy Poehler and Tina Fey were congratulated by Lorne Michaels and the NBC/Comcast brass. The “Rush” contingent reveled, too, but there was even more excitement in the “Gold Meets Golden” room where Olympians past and present mingled with Hollywood admirers. Legendary swimmer and broadcaster Donna de Varona and her daughter, thesp Joanna Pinto, were seen taking pics with Jessica Chastain.

HBO‘s after-party certainly had an adults’ versus kids’ table feel this year. While a few stars like “Girls'” Allison Williams and “Game of Thrones'” Maisie Williams could be seen inside with friends, the interior of the Beverly Hilton’s Circa 55 was more a scene for back-slapping and deal talking among business folks like producer Mark Canton and Dick Clark Productions CEO Allen Shapiro. Outside, talent like “Breaking Bad” and “Michael J. Fox Show’s” Betsy Brandt cut up the dance floor and there was a mini reunion of “The Wire” alums Idris Elba (“Luther,” “Mandela: Long Walk to Freedom”) and Michael K. Williams (“Boardwalk Empire” and “12 Years a Slave”) while Judd Apatow, Mike Tyson and some of the “True Blood” and “Veep” actors milled about. Lady Gaga, “The Wolf of Wall Street’s” Jonah Hill and Margot Robbie, “Parks and Rec’s” Nick Offerman and Megan Mullally also made appearances. Although “Nebraska” didn’t win any Globes, June Squibb is enjoying the first awards circuit of her career. “I could get used to all of this,” she told Variety at the HBO party. She also thought it would be “real nice” if Oscar comes knocking on Thursday. (Stay tuned to Variety.com for Oscar nomination coverage bright and early.) On to the next awards show…