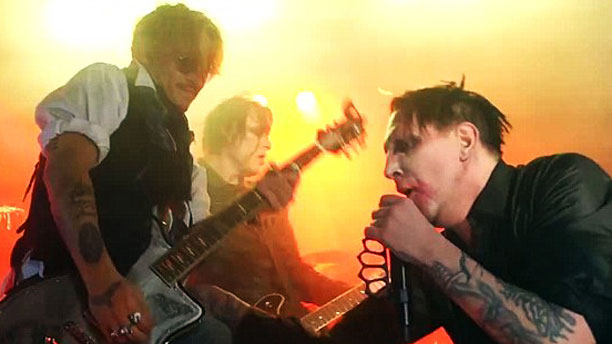 Johnny Depp and Marilyn Manson have teamed up once again.

This is not the first time Manson and Depp have played together. In 2012, the two performed a cover of Eurythmics’ “Sweet Dreams (Are Made of This)” at the 4th Annual Revolver Golden Gods Awards. That same year, they also collaborated for a cover of Carly Simon’s “You’re So Vain,” which appeared as a bonus song on Manson’s 2012 album “Born Villain.”

Manson has also appeared to support Depp at red carpets, including the year’s “Transcendence” premiere.

Though Depp is best known for his acting talents, the star has been busy in the music world. This year has seen him play guitar with Aerosmith, Paul McCartney, Willie Nelson, Butch Walker and more.

Manson is expected to release a new album this year, and recently unveiled new single “Third Day of a Seven Day Binge.” He has a recurring role on the current season of “Sons of Anarchy” as a white supremacist.