Continue to Variety SKIP AD
You will be redirected back to your article in seconds
Mar 25, 2014 10:15am PT 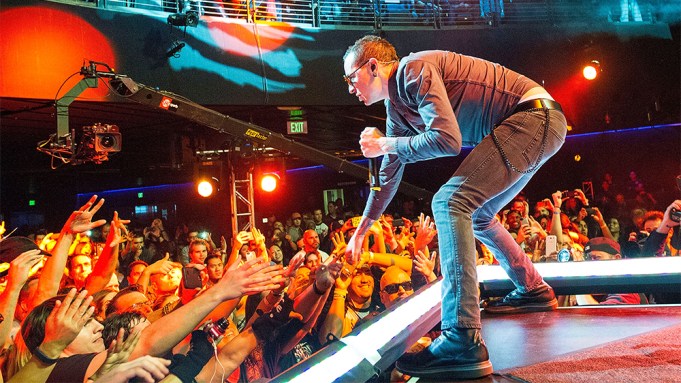 After announcing a North American summer tour with 30 Seconds to Mars and AFI, the members of Linkin Park revealed Tuesday that they also have collaborated with a more unlikely partner for the release of their new music video — a video game.

By joining forces with Team Dakota, the folks behind the Xbox and Windows world-creation game “Project Spark,” the band has created the first fully-interactive and re-mixable music video within a video game for the new single “Guilty All the Same,” which was made available Tuesday morning.

The highly customizable, interactive video’s basic premise is that guilt follows the main character through his or her run through the game space, though everything else is pretty much up to the users and can be catered to their preferences.

“You could instantly create an idea, make a game or whatever is on the top of your mind way closer to the speed of thought than anything I had ever seen,” Hahn said.

After a lot of “back and forth work,” the final product came together, though Linkin Park’s Mike Shinoda said just about anyone can create this type of game using “Spark.”

“If we had access to the stuff and weren’t in the middle of finishing an album, we would be able to make a lot of this or all of this ourselves,” Shinoda explained. “I think that’s the point.”

Team Dakota studio manager Saxs Persson said “Spark,” available via Xbox One and Microsoft 8, is more than just a video game experience. Users can completely customize the look and surroundings of the game and even create remixes of the Linkin Park track as if they were in a recording studio.

“We’re going to give them the track and music video and set them free to do whatever they want with music. There’s brand new functionality around how you can control music now,” he said. “The biggest thing is to have a call to action that this can make way more than just games. We’re trying to break down barriers like that, one at a time. This was a perfect collaboration to show that this is a perfect tool for expression, just pure expression.”

This isn’t the first time Linkin Park has dabbled in the digital space to launch their music. The band previously devised an interactive release for “Lost in the Echo,” a single off their last album, using Facebook integration.

“We did a Facebook game where you’d access the video through Facebook connect and it would pull your information and put it in the video. So you’d be watching the video with your pictures in it and your information in it,” Shinoda explained. “The reason we did that is because we’d been trying for a while to try and get outside of the normal music video thing. Music videos on their own, to me, are just kind of boring at this point.”

Shinoda also said that the seemingly limitless nature of “Spark” helps solve the previous problem of overzealous fans and gamers getting through a game and then wanting more.

Now that the game has launched, there will eventually be a competition for the top fan remix, since users can rate each other’s creations on “Spark.”

Going forward, Shinoda said the band is still working on visuals for their upcoming tour, and this music video has certainly set the bar for their future ventures.

“We can’t top this,” he said, before teasing “unless Microsoft wants to start a brand new branch of the company.”