Those expecting this to be Reese Witherspoon's 'The Blind Side' may be surprised to find this play-it-safe drama (rightly) focused on its Sudanese refugees. 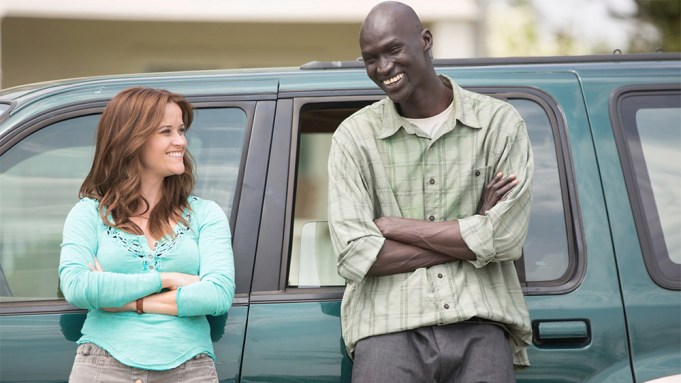 A good lie, according to Huckleberry Finn, is a prevarication where the “rightness” of the outcome excuses the “wrongness” of having fibbed in the first place. The good lie of “The Good Lie,” therefore, is that this true(ish) story of Sudanese refugees emigrating to America is a Reese Witherspoon movie, when in fact, she doesn’t show up until 35 minutes into an uplifting and overly earnest picture that isn’t really about her character at all — nor should it be. But if that mistruth helps spread the word about the Sudanese situation, earning Warner Bros. a pretty penny in the process, how wrong can it be?

The thing is, we miss Reese. Over the past decade, the actress has grown too scarce on the bigscreen, and though “Wild” promises to be her big awards vehicle this year, the advertising campaign for “The Good Lie” suggests a chance to see America’s sweetheart in feisty “Erin Brockovich” or “The Blind Side” mode, demanding, “Who do I have to screw around here to see a goddamn immigration supervisor?” in her most sexually empowered redneck drawl.

That happens, by the way, but it’s hardly typical of director Philippe Falardeau’s sensitive yet play-it-safe approach. Surely it’s for the best that such white-girl-to-the-rescue theatrics account for just one scene in a movie that otherwise has the good sense to focus on four Sudanese refugees offered shelter in America. Part of a resettlement effort of nearly 3,600, dubbed the “Lost Boys of Sudan,” these four arrive in the U.S. 13 years after militia attacks left them orphaned and homeless, and one year before 9/11 forced authorities to suspend the program out of anti-terrorist concerns.

Though the characters themselves are fictional, screenwriter Margaret Nagle (“Boardwalk Empire”) based them on the experiences of real Sudanese refugees, opening the film with a group of six children, brought together by violence, who walk hundreds of miles in search of safety. Coming off his more confrontational 2012 foreign-language Oscar nominee “Monsieur Lazhar,” Canadian director Falardeau presents the Sudanese trauma with kid gloves, as if trying to protect young Western audiences from getting too vivid an idea of what they went through.

Filming for his first time in English (as well as the Nuer and Dinka dialects) and using Sudanese actors with actual ties to the events, the helmer rejects the gritty pseudo-docu staging of pics like “Hotel Rwanda” or the hallucinatory brutality of this year’s “White Shadow.” Falardeau actually spent time filming in Sudan for a completely different project back in 1994 before being forced to evacuate by the U.N., but he consciously decides not to rub our noses in tarted-up awfulness, opting for steady-footed lensing and subdued music, then trusting our imaginations to fill in the horrors.

This also conveniently allows the pic to bring back characters we pessimistically might have assumed to be dead. The family-like group of six loses two members before reaching the refugee camp, and is forced to split up further after passing through customs in New York. The three men — Jeremiah (Ger Duany), Paul (Emmanuel Jal) and default “chief” Mamere (Arnold Oceng) — are given an apartment to share in Kansas City, Mo., while their sister, Abital (Kuoth Wiel), is sent off to Boston. When the refugees’ sponsor drops the ball, it falls to Witherspoon’s character, an employment counselor named Carrie, to meet them at the airport.

Faced with culture shock, all these men struggle with different issues, from drug abuse to incompatible values (Jeremiah rather poignantly resigns from his supermarket stocker job because he can’t bear to let good produce go to waste). But Mamere’s dreams take precedence — first, to study medicine and become a doctor, and second, to reunite the group’s splintered family, whatever the cost. Along the way, the pic can’t resist a few easy-chuckle “Coming to America”-style fish-out-of-water gags: The three men are startled when the apartment phone rings, for instance, and Mamere doesn’t realize he’s offending when he gives Carrie the nickname “Yaardit,” which roughly translates to “great white cow.”

Mamere means this as a term of respect, and the movie takes great care to show how appreciative the refugees are to be given such an opportunity, even though the adjustment can be difficult. It also reveals how thick-skinned Americans like Carrie and her boss Jack (Corey Stoll) have been compelled to rearrange their priorities after interacting with those in such dire need of support — the angle that no doubt justifies Witherspoon’s poster-girl status. And let’s admit it: She’s the reason most people will see the movie anyway. Otherwise, they’d do better to seek out docus “God Grew Tired of Us” or “The Lost Boys of Sudan,” or track down Warren St. John’s stirring memoir, “Outcasts United,” about coaching an all-refugee youth soccer team in Clarkston, Ga.