Bryan Singer returns to blockbuster form with this strikingly ambitious continuation of the 'X-Men' saga. 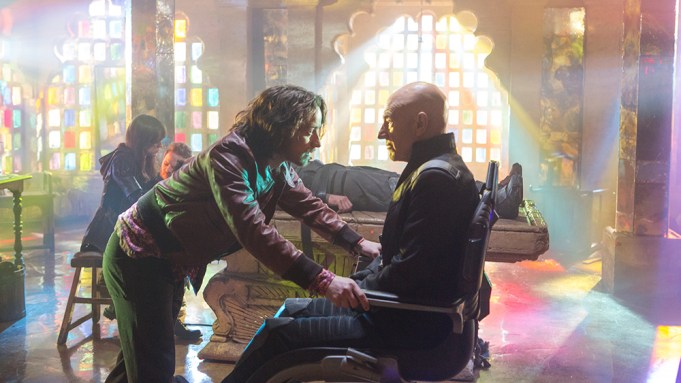 No skyscrapers blow up, no cities are leveled, and while the White House and a football stadium suffer some serious structural damage, the wholesale destruction of human civilization is kept to a refreshing minimum in “X-Men: Days of Future Past” — just one of several respects in which this strikingly ambitious yet intimately scaled entertainment distinguishes itself from so much of its comicbook-movie kind. Back at the helm of the Fox/Marvel franchise he successfully launched 14 years ago, director Bryan Singer stages a stealth reboot by introducing a playful time-travel element to the ongoing saga, bringing two generations of mutantkind together in a story that toggles cleverly (if not always 100% coherently) between the political tumult of 1973 and a not-so-distant dystopian future. Singer’s scandalous recent headlines are unlikely to impact the commercial fortunes of this keenly anticipated tentpole attraction, whose B.O. haul stands to rival and perhaps exceed that of the series’ top earner to date, “X-Men: The Last Stand.”

Its $459 million worldwide gross notwithstanding, that 2006 smash marked the beginning of a severe lapse in quality for the franchise, as Singer, having directed the excellent first two pictures, left the third one in the singularly ill-suited hands of Brett Ratner. (“The Last Stand” was followed, but not much improved upon, by Gavin Hood’s “X-Men Origins: Wolverine” in 2009.) Fortunately, the overall series has been on the creative upswing in recent years, buoyed by Matthew Vaughn’s terrific prequel “X-Men: First Class” (2011) and James Mangold’s unexpectedly fine “The Wolverine” (2013). And given that Singer’s own career hasn’t exactly flourished in the meantime with “Superman Returns,” “Valkyrie” and last year’s bomb “Jack the Giant Slayer,” it’s not especially surprising to see him make his long-overdue return to blockbuster form here: Not since 2003’s “X2: X-Men United” has this filmmaker tapped so effortlessly into his talent for comicbook gravitas, his ability to mine emotional resonance, pop poetry and (crucially) sly humor from material that could otherwise have veered into strained seriousness or high camp.

Just as the first “X-Men” opened with a flashback to the Holocaust, so the new film commences with a grim evocation of death and warfare, this time set in a fictitious future. A government army of killer robots known as Sentinels has almost succeeded in wiping out all mutants and their human supporters, leaving Professor Charles Xavier (Patrick Stewart) and his longtime friend/nemesis, Erik Lensher/Magneto (Ian McKellen), to seek refuge with their few remaining allies in a remote Chinese safe house. Their last hope is Kitty Pryde (Ellen Page), whose powers include the curious ability to transport a person’s consciousness through time: Professor X and Magneto propose that she send Logan/Wolverine (Hugh Jackman) back to the year 1973 in order to undo certain key events and thereby erase the Sentinel program from history. (With his superhuman powers of bodily regeneration, Logan is the only one who could withstand such a journey — a handy justification for keeping the series’ defining character front and center.)

Hurled back to the heyday of lava lamps and waterbeds, Richard Nixon and Alice Cooper, Logan must convince the younger, hipper version of Charles (James McAvoy) that a dark future awaits if they don’t act immediately. This turns out to be easier said than done. The ’60s were an especially rough decade for Charles, leaving him a mental and emotional wreck: His school for young mutants has been abandoned (only Hank McCoy/Beast, played once again by Nicholas Hoult, has stuck around), and he’s addicted to a serum that restores his ability to walk yet stifles his telepathic powers — which is to say, his gift for empathy. Still, Logan proves sufficiently persuasive, and Charles reluctantly agrees to help him infiltrate the Pentagon and free Erik (Michael Fassbender) from the subterranean prison where he’s being held for past crimes.

It’s a dangerous but necessary step that’s pulled off, with smashing aplomb, by Logan’s old pal Peter (Evan Peters), a leather-jacketed, silver-haired mutant known as Quicksilver for his incredible agility, and one of the few Marvel crossover characters who can claim membership with the X-Men and the Avengers. While Aaron Taylor-Johnson is playing the character in Disney’s concurrent Marvel franchise (he’ll be seen at length in 2015’s “Avengers: Age of Ultron”), the bar has been set remarkably high here: Peters’ Quicksilver steals every scene he’s in, especially one brilliant, deliriously fun action sequence that reveals how everything seems to advance in slow-motion from his perspective.

In order to stop the Sentinels devised by the mutant-mutilating Dr. Trask (Peter Dinklage), the latest in a long line of “X-Men” villains creepily modeled on Mengele, the uneasily aligned Charles, Erik and Logan must first head to France, where the Paris Peace Accords are about to take place. Their goal is to track down the renegade shape-shifter Raven/Mystique (Jennifer Lawrence), who doesn’t realize that her plot to assassinate Trask will only accelerate the government’s mutant-extinction program. “We can show them a better path,” Charles intones more than once, cutting to the moral and thematic core of a series that has always expressed its solidarity with the oppressed and misunderstood, predicated on the sincere notion that the honorable deeds of an embattled few can indeed alter the hearts, minds and fortunes of many.

Working from Simon Kinberg’s screenplay (very loosely adapted from an “X-Men” comicbook storyline by Chris Claremont and John Byrne), Singer unspools these intricate developments in a smooth, carefully controlled style that, while hardly skimping on expertly choreographed action and lavish f/x spectacle, puts a gratifying premium on psychological depth and delineation of character: The story effectively becomes a platonic triangle, with Professor X and Magneto (who, as always, has his own surprising agenda) waging war for Mystique’s soul. Nearly all the moral conflicts at play — will Mystique abandon her murderous agenda? Can Charles overcome his crippling anguish and fight the good fight? — are resolved in fairly foreseeable fashion, dovetailing neatly with the tale’s overarching themes of individual and collective redemption. But if the characters’ quandaries at times feel overly circumscribed, they’re also advanced with a bracing emotional directness, devoid of either cynicism or sentimentalism, that touches genuine chords of feeling over the course of the film’s fleet 130-minute running time.

While not as brassy in its period stylization as Vaughn’s ’60s-set “X-Men: First Class,” “Days of Future Past” embraces its specific historical moment with similar revisionist gusto, from an early subplot that sends Mystique off to Saigon to rescue a squad of mutants from Trask’s clutches, to a borderline-tacky plot point concerning Magneto’s suspected role in the JFK assassination. Given the popular Hollywood practice of depicting real-life U.S. presidents as obliquely as possible (“Lee Daniels’ The Butler” notwithstanding), it’s refreshing to see an actor (Canadian thesp Mark Camacho) actually dare to inhabit the voice and visage of Nixon, and inhabit them well, in a movie that uses the former POTUS’ post-Vietnam flop sweat to smart narrative advantage. Stylistically, the decision to give certain public moments the grainy, bright-colored look of ’70s newsreels adds a touch of verite immediacy, although the Super 8 and 16mm footage looks rather odd in 3D (much of the film was shot stereoscopically, and makes fine if not exceptional use of the format.)

As they did in “First Class,” McAvoy and Fassbender make an electrifying duo here, doing full justice to the emotionally complicated swirl of love, anger, kinship and betrayal that binds Charles and Erik, and rendering the kinder, gentler interplay between Stewart and McKellen all the more poignant by comparison. In a picture grounded by a number of richly involving two-character dialogue exchanges, one of the most moving sequences finds Charles’ older and younger selves mysteriously communicating across the space-time continuum. While Lawrence looks fetching enough in Mystique’s blue birthday suit, the actress registers with less impact than one might have hoped; coming off her explosively entertaining turn in the much more elaborate Me Decade re-creation of “American Hustle,” she has relatively little to do here other than glower, snarl and let the f/x artists do their thing (though it’s fun to hear her speaking Vietnamese at one point).

With Wolverine playing the unusual role of mediator this time around, Jackman is in unusually restrained, cool-headed form; the actor’s slightly disoriented appearance throughout is entirely appropriate to the character’s journey, and may well be shared by a few fans in the later reels, when the story’s time-travel logic gets especially raggedy. By the end, however, it’s clear that the “X-Men” series has effectively opened a temporal loophole that should lead to fresh adventures down the road — namely, “X-Men: Apocalypse,” which is set to be released in 2016, although it’s unclear whether the embattled Singer will return to the director’s chair.

The film’s intense focus on its four leads — plus the excellent Dinklage, easily beating out McAvoy for most conspicuously ’70s hair — leaves little room for the rest of the ensemble, with its surfeit of new and familiar faces. For all the ways in which the material fits Singer like a glove, the filmmaker still hasn’t figured out a way to make Halle Berry’s Storm a compelling presence; Shawn Ashmore’s Iceman pops up in welcome but somewhat truncated fashion; and it’s a mystery why Anna Paquin retains such prominent billing, given Rogue’s blink-and-you-miss-it appearance. Speaking of Blink, the mutant who goes by that name is one of the more memorable “X-Men” newcomers, due more to her nifty powers of teleportation than to Chinese star Fan Bingbing’s muted performance. Other fresh additions to the mutant ranks who register briefly here include Bishop (Omar Sy), Sunspot (Adan Canto) and Warpath (Booboo Stewart).

Costume designer Louise Mingenbach has fun outfitting roughly half the cast in an array of period duds without going overboard. Like many of Singer’s prior pics, the production benefits from the dual contributions of versatile editor-composer John Ottman — particularly evident in the story’s clean pacing and construction, despite some busy cross-cutting in the action-heavy final stretch.