The latest, longest and least necessary entry in this increasingly expendable action franchise. 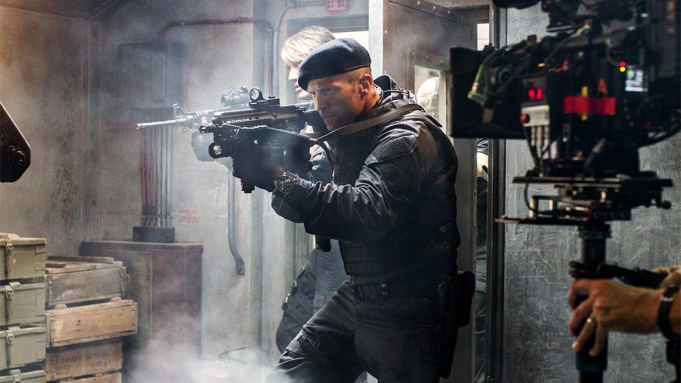 In the moviegoer’s hierarchy of needs, a PG-13 “Expendables” is about as essential as a Joel Schumacher remake of “Tokyo Story.” Or, to put it in terms more appropriate to its target audience: You need “The Expendables 3” like you need a kick in the crotch, and while this running-on-fumes sequel may not be quite as painful a thing to experience, it will waste considerably more of your time. From train-crashing start to back-slapping finish, Lionsgate’s latest and longest showcase for Sylvester Stallone and other aging slabs of B-movie beef — the marquee names this time around include Mel Gibson and Harrison Ford — smacks of desperation and teen-audience pandering, from the literally bloodless action to the introduction of a younger, hotter backup team of fighters (call them the Hip Replacements). It’s an obvious, half-hearted ploy to keep the beleaguered series going, when it would be far wiser to heed one character’s advice: “You know, I’m getting out of this business and so should you.”

The Stallone-directed first “Expendables” (2010) grossed an impressive $103 million in the U.S. en route to a total worldwide haul of $274 million; its 2012 follow-up, helmed by Simon West, took a hit domestically ($85 million) but more than made up the difference internationally, for a global cume of $305 million. But even without factoring in franchise fatigue and the law of diminishing returns, it’s hard to see the new movie, from Australian helmer-for-hire Patrick Hughes, extending the series’ winning streak — due in part to an online leak that has already resulted in more than 2 million illegal downloads, a number that will only continue to rise between now and Lionsgate’s Aug. 15 Stateside rollout. Not to condone piracy or anything, but emerging from “The Expendables 3” (which, at 127 minutes, runs considerably longer than its predecessors), you can’t help but envy those streamers for experiencing the picture under optimal circumstances, with volume controls and fast-forward buttons at the ready.

Credited to three writers, which is at least two-and-a-half too many, the script kicks off with a foolhardy mission involving a helicopter, a speeding locomotive and the first of many outsourced-vfx explosions. Once more we’re tagging along with gang leader Barney Ross (Stallone), second-in-command Lee Christmas (Jason Statham), and their ragtag team of battle-scarred fighters, who are regularly hired to do the government’s dirty work in faraway places. The Expendables’ ranks have taken a major beating of late, and so Barney decides to stage a prison break and bring back one of the gang’s founding members, Doctor Death (Wesley Snipes), who’s so competitive and lethal with a blade that he refers to himself early on as “the knife before Christmas.” Zing!

Doctor Death isn’t the only original Expendable dragged in from some previously unknown and thoroughly uncompelling backstory. Surfacing in time for a chaotic setpiece in Somalia is Barney’s old frenemy Conrad Stonebanks (Gibson), a hard-to-kill supervillain who manages to slip through their clutches, gravely wounding weapons specialist Hale Caesar (Terry Crews) in the process. Realizing that his trusty teammates — who include Swedish sniper Gunnar Jensen (Dolph Lundgren) and demolitions expert Toll Road (Randy Couture) — are getting too old to keep risking their lives like this, Barney ditches them and, at the behest of CIA officer Max Drummer (Ford), recruits a brand-new crew of younger, fresher Expendables. They’re played, pretty unmemorably, by Kellan Lutz, Glen Powell, boxing champion Victor Ortiz and, in the token-female role, mixed martial artist Ronda Rousey — all of whom face the unenviable task of establishing a secondary rooting interest in a movie where even the leads have trouble holding attention.

Naturally, Christmas and company are none too thrilled to find their makeshift family so unceremoniously disbanded for this bunch of newbies. And so “The Expendables 3” tries to mix in a few tears with all the testosterone, honoring the depth and resilience of male friendships forged in combat (at one point, you may wonder if you’ve wandered into “Fist Bump: The Movie”), while acknowledging the looming specter of the men’s mortality. It’s a theme that would seem to blend well with the series’ main objective, which is to pay loving, somewhat valedictory tribute to as many fading ’80s and ’90s action heroes in the same movie as possible. As an actor proudly notes in the press materials: “We have Rocky, the Terminator, Indiana Jones, the Transporter, Mad Max, Desperado and Blade.” He seems to have left out the follow-up caveat: “And we gave them virtually nothing of interest to do or say for two hours!”

The previous two movies, although barely defensible, were at least enlivened by a sly awareness of their own awfulness, and got by on the strength of their no-nonsense, R-rated brutality. But that grisly sense of purpose is nowhere to be found in “The Expendables 3,” which, for clearly commercial reasons, has opted for a more audience-friendly PG-13 rating — a gutless decision that drains the action of its excitement, its visceral impact and its glorious disreputability. By the time the movie finally arrives at an incoherent endgame set in some fictional Middle Eastern hellhole, where editors Sean Albertson and Paul Harb try their damnedest to make sense of a whirlwind of action involving rolling tanks, speeding motorcycles and dive-bombing helicopters, it’s at once impossible to follow what’s going on and impossible to care in any event.

Stallone asserts his position as the master of this flailing circus by giving himself the film’s one genuinely funny line, while Kelsey Grammer adds a touch of class to the proceedings as a mercenary who helps Barney with his new recruits. He doesn’t see much action (Dr. Frasier Crane isn’t one of our most enduring meathead icons), but following his roles in “Transformers: Age of Extinction” and the Starz series “Boss,” it’s fun to see Grammer extending his reach into tough-guy territory. But perhaps to no one’s surprise, it’s Gibson who comes the closest to creating a pocket of viewer interest whenever he’s onscreen. As he did in last year’s “Machete Kills,” the Australian star seems to relish the opportunity to slyly riff on his troubled real-life persona with a derivative but effective portrait of villainy, and to remind us of what how much charisma he still exudes in front of the camera.

Watching Gibson snarl sure beats watching Ford grimace — or, for that matter, watching Arnold Schwarzenegger pop into the frame every few scenes or so like a 250-pound jack-in-the-box. This is the sort of numbskull non-entertainment that considers it worthwhile to fly in a martial-arts superstar like Jet Li and have him sit around firing a machine gun, pausing every so often to deliver the most awkward line readings of his career. Still, maybe better to be marginalized than overexposed: One of the cast’s highest-profile additions is Antonio Banderas as Galgo, an ingratiating, over-eager assassin whose habit of sharing personal anecdotes nonstop is meant to provide long-winded comic relief (although listen closely for a tragic, potentially loaded reference to Benghazi). Banderas is trying way too hard, but that’s borderline refreshing in a movie where too many people seem to be doing the opposite.

Here’s more with Justin Chang on “The Expendables 3”: