Film Review: ‘If I Stay’

Chloe Grace Moretz plays a teen trapped between life and death in this well-meaning but pedestrian romantic tearjerker. 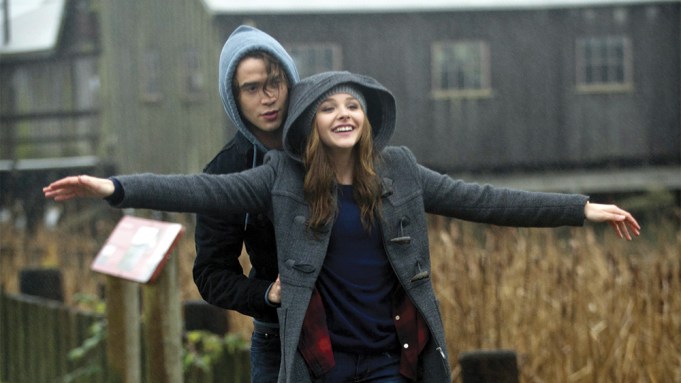 A horrific road accident leaves a teenage girl stranded between life and death in “If I Stay,” a life-flashing-before-her-eyes melodrama that similarly hovers in a weird limbo between sensitivity and clumsiness. Out-of-body experiences and gooey romantic interludes aside, this adaptation of Gayle Forman’s 2009 bestseller hinges on the sort of relatably horrific worst-nightmare scenario that naturally invites, and rewards, a certain level of viewer empathy. But while many in the audience may well find themselves getting misty-eyed as the screen fades to white and softly crooned rock tunes flood the soundtrack, the overall execution is so pedestrian that it’s possible to feel more moved by the filmmakers’ good intentions than by the actual emotional content onscreen. Warner Bros.’ attempt to cash in on the current craze for mortality-obsessed YA material — call it “The Fault in Our Cars” — should enjoy decent B.O. staying power among the book’s fans and beyond.

The “I” of the title is Mia Hall (Chloe Grace Moretz), a lovely, kinda-shy high schooler and gifted cellist who lives in Oregon with her ultra-hip parents, Kat (Mireille Enos) and Denny (Joshua Leonard), and her cute little brother, Teddy (Jakob Davies). Mia is already in an anxious state of uncertainty when the movie opens, awaiting an acceptance letter from Juilliard that might determine the future of not only her career, but also her relationship with her up-and-coming rock-star boyfriend, Adam (Jamie Blackley). But a much more crucial decision awaits her after a family car ride turns deadly one snowy morning, and when Mia awakens sometime later by the side of the road, she sees her own unconscious body being strapped into an ambulance and transported to the hospital.

Mia hasn’t died; she’s just fallen into a coma. Not all her family members are so lucky, though, in keeping with the emotional manipulation that comes with the territory, the truth about exactly who has and hasn’t survived is deliberately withheld for maximum suspense and devastation. Invisible and inaudible to those around her, Mia’s spirit wanders the hospital, eavesdropping on her loved ones as they try to cope and pray for her to make it through surgery. She contemplates her uncertain future and wonders whether she should even bother regaining consciousness. But she also reflects on her past, helpfully filled in by long flashbacks that show a young Mia (Gabrielle Cerys Haslett) falling in love with the cello, to the horrified amusement of her mom and especially her former punk-rocker dad. Years later, she’ll fall in love with another talented musician, Adam, who hails from a very different world of bar gigs, road tours and whispers of a possible record deal — a world that her parents, and even her Iggy Pop-loving brother, seem to know far better than she does.

“If I Stay” is a movie of blunt contrasts — not just life vs. death, but also extraversion vs. introversion, classical vs. rock — both of which are amply represented on the soundtrack (though “Should I Stay or Should I Go” somehow fails to make an appearance). The characters’ wildly divergent musical tastes provide a convenient metaphor for their differences as individuals: Mia, who spends hours privately steeped in Bach and Beethoven, is withdrawn and socially awkward, and struggles to fit into her b.f.’s ever-widening circle of friends, fans and groupies. Later, with Adam’s gentle insistence, she’ll learn that the cello need not be just a solo instrument, in a campfire sequence so warmly affectionate yet thematically on-the-nose, you might not know whether to hug yourself or roll your eyes. The act of consummation is similarly couched in musical metaphors, though there isn’t much of a charge to the gauzily, tastefully shot love scenes; gone, alas, is the scene from the book in which Mia takes bow in hand and performs her own scintillating symphony on Alex’s torso.

If “The Fault in Our Stars” at times fell prey to the troubling suggestion that terminal cancer blesses you with a higher level of self-awareness, “If I Stay” manages to confront its central tragedy on less noxious, more honest and accessible terms. Shuffling and restructuring key episodes from the source material, scribe Shauna Cross (“Whip It,” “He’s Just Not That Into You”) tries to approximate the pensive quality of the book’s first-person narration by making frequent use of voiceover, often slathered over the transitions between Mia’s happy-sad memories and the ghostly purgatory she now inhabits. Yet these shifts between past and present never cast a spell or rise above a blandly workmanlike feel; far from achieving the eerie, ethereal quality desired, listening to Moretz utter banalities like “Sometimes you make choices in life, and sometimes choices make you” only makes the story feel like a clunkier, more earthbound experience.

Director R.J. Cutler, a documentarian (“The September Issue,” “The World According to Dick Cheney”) making his narrative feature debut, favors a largely flat, televisual presentation that almost counts as an intriguingly counterintuitive choice for this semi-supernatural material, which in less subtle hands might have wound up in “The Lovely Bones” territory. Overall there’s a becoming modesty to the production (Vancouver stands in ably enough for Portland), and if the ending is never really in doubt, the final shot is delivered with a haunting abruptness that suggests the capper to a more artful, elegant movie. (One mystery that persists is the question of exactly when the film is set; we seem to be in a pre-Internet, pre-social-media era, or at least an era when Juilliard still sends out letters by snail mail.)

As ever, Moretz’s intelligence and vulnerability as a performer make her an easy screen presence to latch onto, even if she comes off as a bit too self-assured to play the nerdy misfit to Blackley’s teen heartthrob. (Still, she does loosen up eventually, aided in one scene by a Halloween wig that cheekily references Moretz’s Hit-Girl days.) If the romance never really develops a pulse, so to speak — though some will surely beg to differ, citing the image of Adam serenading Mia on the guitar at her hospital bedside — Cutler draws unsurprisingly fine work from the older actors, including Enos and Leonard as Mia’s too-cool parents and Stacy Keach as her grandfather, whose attempts to make up for past regrets supply some of the film’s more affecting moments.

Film Review: ‘If I Stay’