Director David Fincher and stars Rosamund Pike and Ben Affleck are at the top of their game in this mesmerizing adaptation of Gillian Flynn's novel. 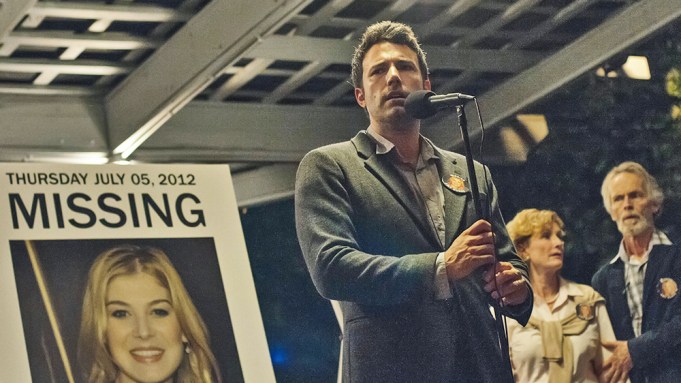 A lady vanishes and is soon presumed dead, but it’s her marriage that winds up on the autopsy table in “Gone Girl,” David Fincher’s intricate and richly satisfying adaptation of Gillian Flynn’s 2012 mystery novel. Surgically precise, grimly funny and entirely mesmerizing over the course of its swift 149-minute running time, this taut yet expansive psychological thriller represents an exceptional pairing of filmmaker and material, fully expressing Fincher’s cynicism about the information age and his abiding fascination with the terror and violence lurking beneath the surfaces of contemporary American life. Graced with a mordant wit as dry and chilled as a good Chablis, as well as outstanding performances from Ben Affleck and a revelatory Rosamund Pike, Fox’s Oct. 3 wide release should push past its preordained Oscar-contender status to galvanize the mainstream.

After the perceived commercial disappointment of “The Girl With the Dragon Tattoo” (2011), despite an eventual worldwide haul of more than $230 million, Fincher’s latest R-rated, two-and-a-half-hour screen version of a phenomenally successful potboiler will have an easier time translating its considerable pedigree, critical plaudits and awards-season hype into must-see status. It helps that the director is working on a significantly lower budget this time around (about $50 million), from a novel that has neither steeped too long in the public consciousness nor spawned any prior movies. It also helps that “Gone Girl,” unlike “Dragon Tattoo,” registers as more than just a technically immaculate, dramatically superfluous exercise in style.

Making an impressive screenwriting debut (with adaptations of her two other novels in the works), Flynn has ruthlessly streamlined but not materially altered her story, fully retaining its bifurcated, time-shuffling structure and elaborate, spoiler-susceptible twists. (To preserve the purity of the experience, read no further.) The sheer complexity of the narrative finds an ideal interpreter in Fincher, who boasts one of cinema’s great forensic minds, and who dissects the marriage of Nick and Amy Dunne (Affleck and Pike) with the same clinical precision and eye for minutiae he wielded in his serial-killer procedurals “Seven” and “Zodiac.” Together, he and Flynn spin this study of a troubled relationship into an extreme portrait of matrimonial hell, as well as a stark metaphor for just how little we may know or trust our so-called better halves.

Employing a quick still-shot montage to capture the well-kept lawns and empty storefronts of North Carthage, a sleepy Missouri town hit hard by the 2008 financial crisis, “Gone Girl” opens on the morning of the Dunnes’ fifth wedding anniversary, the same morning Amy inexplicably disappears from their home. Although Nick claims to have no idea what’s happened to his wife, it takes him little time to rouse the suspicions of Det. Rhonda Boney (Kim Dickens), whose thorough sweep of the premises and dogged investigation of his personal life yield considerable evidence that the Dunnes’ marriage, like their finances, has fallen on tough times.

As the case against Nick begins to mount, his seemingly insufficient displays of grief make him an easy target for professional witch hunters like Ellen Abbott (Missi Pyle), a Nancy Grace-like cable harridan who leads the charge against him. It’s not long before Nick is being coached by not only his tough-but-loyal twin sister, Margo (Carrie Coon), but also a high-powered defense attorney, Tanner Bolt (Tyler Perry). Among other things, “Gone Girl” functions as a wickedly entertaining satire of our scandal-obsessed, trash-TV-addicted media culture; this is a movie as conversant with the tawdry true-crime sagas of Scott Peterson and Casey Anthony as it is with classic thrillers of domestic entrapment like “Rebecca,” “Diabolique,” “Rosemary’s Baby” and “Fatal Attraction.”

Through it all, the missing Mrs. Dunne remains a strong, insistent screen presence, popping up in regular flashbacks to her earlier, happier days in New York, where this brainy and beautiful young woman led a life of luxury, sophistication and modest celebrity. The full arc of her relationship with Nick, a working-class Midwesterner, comes into focus: their blissful first encounter and marriage in Manhattan; the slow draining of their resources, exacerbated by their layoffs from their writing jobs; and their eventual relocation to Nick’s Missouri hometown, where he sinks into laziness and despair, leaving Amy trapped in Nowheresville with a man who has lost all motivation to make her happy. Whispers of domestic violence, spousal neglect and infidelity emerge, and other suspicious figures flit into the frame, including Desi Collings (Neil Patrick Harris), a dapper ex-boyfriend of Amy’s, and Noelle Hawthorne (Casey Wilson), her meddlesome neighborhood pal.

It soon becomes clear that the central mystery of “Gone Girl” will hinge not on what happened to Amy, but rather on who she and Nick really are, and what brought them to this fateful point in their marriage — a question that the two leads’ initially poker-faced performances are in no hurry to answer. Whether it’s darting between past and present, or juxtaposing Amy’s cryptic diary entries with the handwritten clues she left behind as part of a fifth-anniversary “treasure hunt” for Nick, Flynn’s screenplay has an unusual ability to keep the story moving on multiple levels, commanding the viewer’s attention with nary an act of explicit violence for most of the film’s runtime. And when “Gone Girl” springs the first of several game-changing reversals around the halfway point, the pleasure stems less from shock value (negligible for those who’ve read the book) than from the sheer delight the filmmakers seem to take in pulling us deeper into their labyrinth.

Fincher is by now well versed in the art of misdirection, and his control of this material is assured and absolute. This is hardly the first time he’s forced us to question what we’re seeing and through whose eyes we’re seeing it (“Fight Club”), or examined the media’s tendency to distort and amplify paranoia (“Zodiac”), or juggled parallel time frames and dueling perspectives so as to complicate our sense of the truth (“The Social Network”). But what makes “Gone Girl” so particularly potent — and such an appropriate match for this filmmaker’s icy view of the human condition — is its deliciously cynical attitude toward the relationship at its core; its sly awareness of the thin line between love and hate, happiness and misery; and its skill at laying bare the cruel, manipulative behavioral patterns that spouses can lapse into over time.

Likely to elicit uncomfortable chuckles of recognition from women and men alike, the film views marriage as a performance of sorts, a contract under which husband and wife agree to a certain measure of pretense. The need to perform, privately as well as publicly, becomes quite literal in Nick and Amy’s case, and “Gone Girl” finally pushes this premise into a realm of nightmarish Grand Guignol absurdity. As it reaches a denouement that stays completely faithful to the novel’s wrap-up (early reports to the contrary), we’re left to entertain the notion that we may never know the whole truth about the person to whom we’ve said “I do” — and indeed, we’re probably better off not knowing.

Affleck has done some of his finest screen work playing men of power and privilege suddenly brought low by fate (George Reeves in “Hollywoodland,” a laid-off executive in “The Company Men”), and he’s perfectly cast as Nick Dunne, bringing just the right golden-boy-gone-to-seed air to a character who is slowly deprived of his dignity and privacy, inch by cruel inch. Often unfairly criticized early in his career for seeming smug, vain and inauthentic onscreen, Affleck is uniquely suited to the role of a man facing those very charges from a fickle and demanding public; it’s a tricky turn, requiring a measure of careful underplaying and emotional aloofness, and he nails it completely.

Still, as its title suggests, “Gone Girl” belongs to its leading lady. Pike is the sort of elegantly composed blonde beauty with whom Hitchcock would have had a field day, and some may well quibble that the actress’s cool British hauteur doesn’t fully capture Amy’s America’s-sweetheart side. Yet as evidenced by her years of solid supporting work, she also possesses the sort of ferocious charisma that magnetizes the screen, and it’s a thrill to watch her fully embrace the showiest, most substantial role of her career. Hers is the low, seductive voice we hear coaxing us through the story’s early passages, and hers is the character who ultimately exhibits the most dynamic range: In any given scene, her Amy can seem vulnerable, aggrieved, calculating, heroic, overmatched, viperous and terrifying.

Flynn’s novel has drawn criticism in some quarters for its alleged misogyny, a highly debatable charge that is largely neutralized here by the atmosphere of gender-blind misanthropy that pervades much of the director’s work. And in the end, Pike’s performance is too singular and vivid to be reduced to simplistic terms of degradation or empowerment; suffice to say that Amy Dunne earns her place alongside Mark Zuckerberg and Lisbeth Salander in Fincher’s gallery of pitiable-yet-monstrous protagonists, whose refusal to beg for the audience’s sympathy is exactly what makes them such undeniable objects of fascination.

The outstanding leads aside, nearly every scene of “Gone Girl” is dotted with terrific supporting players, all of whom fit seamlessly into its broad yet highly specific snapshot of post-recession American life — a portrait that stretches from a Manhattan literary enclave to a cabin hideaway in the Ozarks. Perry and Harris play expertly against type as the media-savvy lawyer and the creepy ex-boyfriend, respectively, while Pyle and Sela A. Ward give sharp turns as two rather different TV personalities who play their parts in spinning the Dunne saga for the outside world. David Clennon and especially Lisa Banes are the very picture of WASP entitlement as Amy’s socialite parents, while Dickens and Coon inject a contrasting note of blue-collar dependability as two women who struggle, not always easily, to give Nick a fair hearing.

As ever, Fincher’s behind-the-scenes collaborators turn in work of an exceptionally high standard. His camera unerringly well placed in every scene, d.p. Jeff Cronenweth brings a drab, underlit look to the Dunnes’ McMansion, the police station and other North Carthage locations (actually Cape Girardeau, Mo.), suitably nondescript in Donald Graham Burt’s production design. Trent Reznor and Atticus Ross, whose moody electronic compositions have become synonymous with the director’s work, once again devise a soundscape that all but pulses with dread, this time by lacing more traditional orchestral fare with their trademark synths.

Working without his usual partner Angus Wall (with whom he won Oscars for “The Social Network” and “The Girl With the Dragon Tattoo”), editor Kirk Baxter cuts the picture to within an inch of its life while still allowing individual scenes and the overall structure to breathe; this is a movie you sink into even when you’re on the edge of your seat. Particularly fraught, violent moments are heightened by quick fade-ins and fade-outs, a hallucinatory effect that registers as palpably as a shudder.