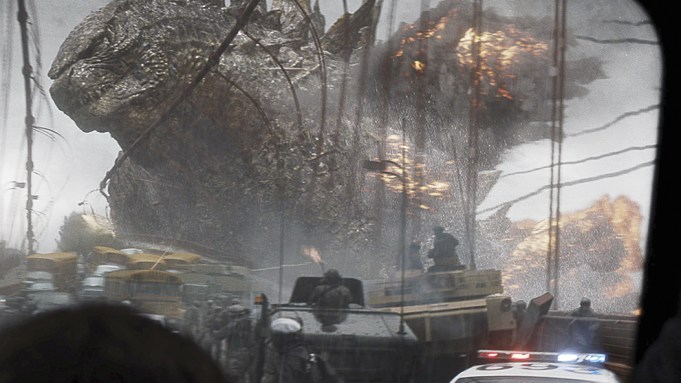 Someone should tell Warner Bros. that when they’ve got a presence as big as Godzilla, they don’t need movie stars, because frankly, who remembers the characters in a rampaging-kaiju movie anyway? Still, just to be safe, the studio has stuffed Gareth Edwards’ deafening, effects-driven reboot with an Oscar winner (Juliette Binoche), three Oscar nominees (Ken Watanabe, Sally Hawkins and David Strathairn), an Emmy winner (Bryan Cranston) and an Olsen sister, leaving scarcely enough screen time for the monster itself. Worldwide B.O. will be massive when “Godzilla” stomps into theaters beginning May 14, bound to crush the $379 million earned by Sony’s underwhelming 1998 version.

As risky decisions go, entrusting microbudget “Monsters” director Edwards to helm a $160 million tentpole — Warners’ first Godzilla pic since acquiring the character rights from Toho in 2010 — looks downright sensible in retrospect, as the filmmaker makes good on his ability to conjure enormous scope and scale via clever staging and visual effects. If anything, it was “Monsters’” stilted live-action bits that left something to be desired, which might explain why Edwards has overcompensated so drastically when it comes to the human performances this time around.

It takes nearly an hour for Godzilla to make his entrance in a film that begins with lots of hyper-secretive government types debating seismic activity that can only point to one thing: enormous prehistoric creatures awakened from their millennia-long slumber. Where traditional Godzilla lore presented the monster as a warning against nuclear proliferation after the bombings of Hiroshima and Nagasaki, this revisionist version suggests “all those nuclear tests” the U.S. conducted in the Pacific between 1946 and 1962 weren’t tests, but an effort to contain a giant amphibious dinosaur. This time, it’s Filipino mining that stirs a giant MUTO — or “Massive Unidentified Terrestrial Organism.”

In a “Jurassic Park”-like prologue, two scientists (Watanabe and Hawkins) helicopter into a huge computer-generated quarry, where they discover two perfectly preserved, chrysalis-shaped pods attached to an enormous skeleton. One of the sacs has ruptured, with whatever escaped digging a messy trail to the sea. The other is taken back to the States for further study, conveniently close to Las Vegas.

Meanwhile, in Tokyo, Joe Brody (Cranston, hyperventilating in a crazy-person wig) and his wife, Sandra (Binoche), live a short drive from the computer-generated nuclear facility where they both work. Whatever busted loose in the Philippines craves radioactive energy, a compulsion at least as strong as the one driving screenwriter Max Borenstein to work character development into a franchise where humans have traditionally been glorified ants. Tragedy strikes, nuclear reactors implode and the couple’s son Ford is left partly parentless and, oddly, ultra-disciplined.

The story picks up again 15 years later with Ford (“Kick-Ass” star Aaron Taylor-Johnson, no longer a skinny John Lennon lookalike) serving as an explosive ordnance disposal jockey for the U.S. Navy — a job that makes him uniquely qualified to defuse the ticking atomic device that threatens to blow San Francisco off the map in the third act. Speaking of bombs, Edwards and his team seem desperate to distance their “Godzilla” from 1998’s Roland Emmerich-directed disappointment, which treated attack by giant Gila monster as yet another disaster-movie premise. Instead, Edwards cribs from the Spielberg playbook, where it’s not the big-picture threat of nuclear power but the more intimate threats to the nuclear family at stake, while anticipation for a long-delayed group hug fuels the narrative.

This latest “Godzilla” shifts the theater of operations from Manhattan to the Pacific Ocean, where monsters are free to pillage the coasts of Japan and California alike, but repeats Emmerich’s most common mistake by focusing on a relatively banal group of characters. Yes, it would help to get a “Godzilla” with interesting humans for a change, but failing that, there’s no shame in putting the reptile front and center.

Edwards seems to have miscalculated our investment in his cast (including Elizabeth Olsen, uncharacteristically bland as Ford’s wife), simultaneously underestimating how satisfying some good old-fashioned monster-on-MUTO action can be. The hero of any Godzilla movie is — or should always be — Godzilla, and this one presents the mighty dino as a sort of scaly Shane: When big radioactive bullies start throwing their weight around, he lumbers out of the deep to defend the helpless, then rides off into the distance every bit as mysterious after the deed is done.

At first, the humans are terrified by the lizard’s appearance, but soon enough they come around, embracing the philosophy that “the enemy of my enemy is my friend,” or, as Watanabe puts it, “The arrogance of man is thinking nature is in our control and not the other way around. Let them fight!” That would be splendid advice for the filmmakers to heed as well, since we often get the sense that while the movie is distracted by what the people are doing, a terrific battle is raging somewhere else in the city — the mere sound of which (in its bass-blasting, “Dark Knight”-indebted way) threatens to bring the theater crumbling down around us.

No previous Godzilla movie has worried much about the issue of plausibility (the most obvious exception being the unofficial kaiju epic “Cloverfield,” which went the found-footage route in trying to pass things off as “real”), but it seems to be an almost crippling concern here. The creative team spends entirely too much time attempting to treat the threat as authentic, resorting to myriad tricks even when audiences would be more than willing to suspend their disbelief: Nearly all the significant monster scenes happen at night; much of the creature footage is shown either directly from a human p.o.v. (like the shot seen through Ford’s facemask as he skydives past Godzilla) or over their shoulders from ground level (as when closing bomb-shelter doors obscure a particularly juicy bout); and TV monitors in most locations broadcast eyewitness footage of cities under siege.

Godzilla movies, like wrestling matches, are ultimately judged by the quality of the mayhem, and Edwards excels at blowing things up. Though some of the first visual effects we see onscreen (the Filipino mine, the Japanese nuclear plant) look phony, especially projected in post-converted 3D, the creature effects are terrific, using phosphorescent accents — glowing gold for the MUTOs, blue fire for Godzilla — to make the monsters look even more menacing after dark. And though the film banishes most of their fighting to the background, the visual effects crew at MPC made an inspired choice in using motion-capture humans as a reference for Godzilla’s hand-animated performance, thereby updating the lo-fi, B-movie tradition in which audiences charitably forgot that they were cheering for a guy in a rubber suit stomping through a cardboard city.