Film Review: ‘A Million Ways to Die in the West’

Seth MacFarlane steps out of the teddy-bear suit for an overlong, uninspired comic Western. 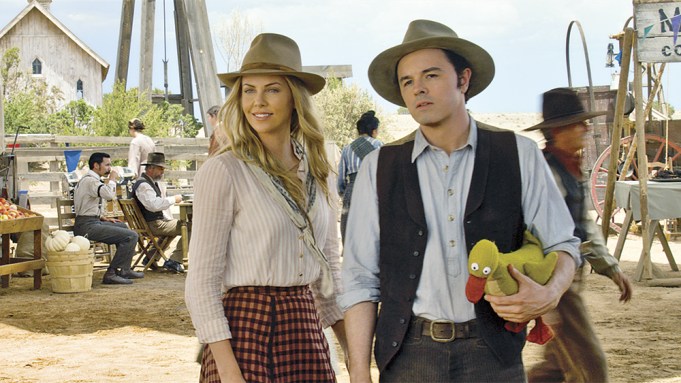 The saddles don’t blaze in “A Million Ways to Die in the West,” and the pacing is limper than a three-legged horse. In following up his 2012 smash “Ted” with a lavish comic Western, Seth MacFarlane has delivered a flaccid all-star farce that’s handsomely dressed up with nowhere to go for most of its padded two-hour running time. Pic faces a formidable box office duel in its opening frame against Disney’s costly “Maleficent,” but regardless of the outcome there, it won’t come within striking distance of “Ted’s” $549 million global gold rush.

While it may be too tall an order to expect MacFarlane to deliver at the level of classic Mel Brooks (or Quentin Tarantino), “A Million Ways” fails to measure up to even its own creator’s high standard for nose-thumbing irreverence. Indeed, from “Family Guy” to “Ted,” we’ve come to expect the 40-year-old wunderkind to go for broke and, when he fails, to go down swinging (as in his valiant but misjudged paean to Hollywood cleavage at the 2013 Oscars). What you don’t expect from MacFarlane is a genteel, weightless genre parody that, even with its de rigueur parade of dick and fart jokes, is unlikely to offend anyone born after the gunfight at the O.K. Corral.

But that’s exactly what MacFarlane serves up in this tale of a nebbish sheep farmer who falls for a gorgeous moll and finds his inner gunslinger in the process. When we first meet him, MacFarlane’s Albert Stark has just weaseled his way out of a gunfight in the 1880s frontier town of Old Stump, Ariz., and been promptly dumped by girlfriend Louise (Amanda Seyfried), who already has her doe eyes set on the town’s cocky “mustachery” impresario Foy (Neil Patrick Harris, the ends of his ’stache pomaded into airtight curls). So a disconsolate Albert returns to the family homestead and tends to his disobedient flock, until chance brings him face to face with strapping new-girl-in-town Anna (Charlize Theron), who fails to mention that she’s actually the wife of the most feared bandit for miles around, Clinch Leatherwood (Liam Neeson).

Much of “A Million Ways” devotes itself to Albert’s efforts to win back the hand of his erstwhile lady love, though it’s a measure of the movie’s lazy writing (by MacFarlane and co-scribes Alec Sulkin and Wellesley Wild) that Louise never materializes enough as a character for us to understand what drew Albert to her in the first place. Having impulsively challenged Foy to a duel, the gun-shy Albert gets a crash course in marksmanship from crack shot Anna — a “Raindrops Keep Falling On My Head”-style montage during which one senses teacher and student developing more than a mere educational bond. And it’s largely thanks to the wonderfully loose, sassy Theron that the film stays as engaging as it does for as long as it does. Theron isn’t given much to do here, but she makes the most of it, which is more than can be said for Giovanni Ribisi and Sarah Silverman, who seem trapped in the ninth circle of comic hell as a virginal shoemaker and the prostitute girlfriend who refuses to sleep with him before their wedding night.

Watching “A Million Ways,” it feels as if MacFarlane fell in love with the idea of doing a comic Western and decided he’d worry about the particulars as he went along, resulting in a disjointed series of sketches linked together by lovingly photographed Monument Valley panoramas. In one of the movie’s more inspired bits, Albert quells a tense encounter with the Apache leader Cochise (Wes Studi) by demonstrating a mastery of the Indian tongue, but MacFarlane almost ruins the joke by following it up with a distended peyote dream sequence during which the movie veers perilously close to an ego-soaked vanity project.

Periodically, MacFarlane tries to gussy things up with off-color humor that simply feels off (like a “runaway slave” shooting gallery at the county fair) and a few gross-out gags that land with bigger thuds than the giant ice block that vividly crushes one character’s head into pulp. But nothing in the movie is quite so limiting as the presence of MacFarlane himself in a lead role he proves ill fit to carry. In his first live-action lead, he lumbers through the film spouting dialogue that sounds like an extended standup riff about the horrors of the Old West, all delivered with a modern, ironic-hipster smirk. The effect is not unlike that of seeing Brooks or Woody Allen in their own historical comedies, where they continued to “do” their patented comic personas even when the setting was the Napoleonic Wars or the Spanish Inquisition. Except that MacFarlane, who rose to prominence as an ingenious voice actor, proves surprisingly bland in the flesh, and his unmodulated delivery eventually runs as dry as the desert sands.

The movie benefits from an expensive period look courtesy of production designer Stephen Lineweaver and costume designer Cindy Evans (who dolls Theron up in one particularly memorable green plaid number with an enormous bustle), though MacFarlane seems at a loss, visually, when he has to stage a barroom brawl or an elaborate folk-dancing sequence. Michael Barrett’s widescreen cinematography looks crisp by day, but has a somewhat milky, washed-out quality in the night scenes. A surfeit of unbilled celebrity cameos serves mainly to remind us what cool friends MacFarlane has.

Film Review: ‘A Million Ways to Die in the West’