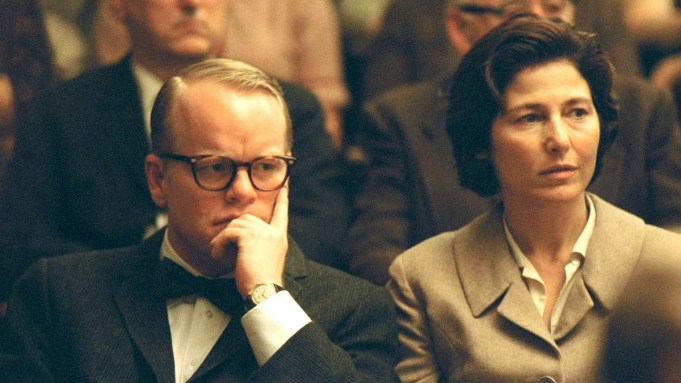 Oscar-winning actor Philip Seymour Hoffman was found dead in his New York apartment on Sunday. He was 46.

According to the Wall Street Journal, the actor was found in his bathroom around 11:15 a.m. by a screenwriter, who called 911, the official said.

Hoffman, who won the best actor Oscar for “Capote” in 2005, most recently appeared at the Sundance Film Festival to promote his new films “God’s Pocket” and Anton Corbin’s “A Most Wanted Man.”

He was also shooting the “Hunger Games” follow-ups “Mockingjay Part 1” and “Part 2” in Atlanta, reprising his role as Plutarch Heavensbee from “The Hunger Games: Catching Fire.”

Last year, the actor completed a 10-day substance abuse program for heroin. Hoffman later revealed that he had been addicted to the drug when he was younger but had been clean for over 20 years.

“We are devastated by the loss of our beloved Phil and appreciate the outpouring of love and support we have received from everyone,” his family said in a statement. “This is a tragic and sudden loss and we ask that you respect our privacy during this time of grieving.  Please keep Phil in your thoughts and prayers.”

With a devilish grin and rotund physique, Hoffman most frequently shone in supporting roles that made good use of his rumpled appearance and intense characterizations. He worked frequently with director Paul Thomas Anderson, appearing in films including “Hard Eight,” “Boogie Nights,” “Magnolia,” “Punch-Drunk Love” and “The Master,” for which he received a supporting actor nomination.

He also received supporting actor nominations for “Doubt” and “Charlie Wilson’s War,” as well as two Tony nominations for his work on the stage in “True West” and “Long Day’s Journey Into Night.”

He was deeply involved in the New York theater world, serving as co-artistic director of the LAByrinth Theater Company, where he directed several plays including “Our Lade of 121st Street.” Some of his New York stage roles include a role in Mike Nichols’ production of “The Seagull,” “Defying Gravity” and “The Merchant of Venice.”

Hoffman made an impression in indie roles such as Todd Solondz’s “Happiness,” “The Talented Mr. Ripley,” “Almost Famous” and “State and Main.” In studio features, he had roles in “Red Dragon,” “Cold Mountain” and “Mission Impossible III.”

He had critically acclaimed roles in “Before the Devil Knows You’re Dead,” in which he played an addict who kills a heroin dealer; “The Savages”; “Moneyball” and “The Ides of March.” Usually a strong supporting player, he had a rare starring role in 2001’s “Love Liza,” co-written by his brother Gordy Hoffman, in which he hauntingly plays a man who huffs gasoline to deal with his grief.

Hoffman made his film directing debut with 2010’s “Jack Goes Boating,” though it failed to garner much recognition.

Born in the Rochester, N.Y. suburb of Fairport, Hoffman graduated with a drama degree from NYU and made his film debut in “Triple Bogey on a Par Five Hole,” followed by a role in “My New Gun.”

After appearing on “Law & Order” in 1991, he made an impression the next year in “Scent of a Woman.” Over the next few years he appeared in films including “Nobody’s Fool,” “The Getaway” and “Twister.”

He is survived by a his longtime partner, costume designer Mimi O’Donnell, with whom he has a son and two daughters.