Lionsgate’s ‘Divergent’ Challenge: Be Like ‘Hunger Games,’ Only Different

Lionsgate and Summit look to lay claim to another franchise, hot on the heels of 'Hunger,' 'Twilight' films 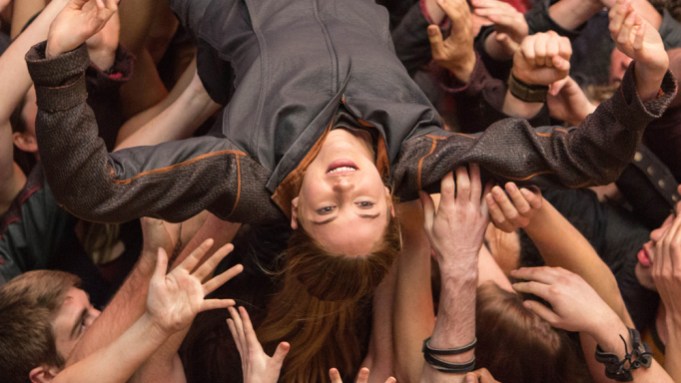 Lionsgate and Summit Entertainment are in some ways victims of their own success.

The movie companies, which merged two years ago, have come to dominate the young adult film market with breakout franchises “Twilight” and “The Hunger Games,” which collectively have grossed nearly $5 billion at the global box office, and catapulted the careers of their respective lead actors.

Such a windfall has set the bar sky high for the next book-to-bigscreen franchise “Divergent,” based on Veronica Roth’s bestselling novels — and for its stars Shailene Woodley and Theo James. The first picture debuts March 21; the second, “Insurgent,” in March 2015; and “Allegiant” in March 2016, although the company has yet to announce whether it’s splitting the final film into two parts.

The biggest challenge on the project facing Lionsgate (which is marketing and releasing the Summit-developed movies) would appear to be convincing audiences that “Divergent” is not just a copycat of “Hunger Games.”

Woodley’s character Beatrice “Tris” Prior is a brown-haired, determined young woman-cum-warrior, much like Jennifer Lawrence’s protagonist Katniss Everdeen in “Hunger Games.” And like “Hunger Games,” the new film is based on a book about a post-revolutionary future, and features a teenage heroine who overcomes enemies that include the government while coming of age and falling in love.

It’s the particulars of the two films that are divergent, in that 22nd-century Chicago stands in for Panem and the districts; and rather than distinguishing herself on the field of battle, Tris stumbles upon her exceptionalism via a government-mandated personality test that shows she can fit into more than one of society’s five factions, each delineated by a particular trait, such as intelligence, honesty or bravery. It’s this “divergent” characteristic that makes her powerful -— and a danger to the status quo.

Neither the executives at Lionsgate, nor the actors and producers behind the new film, are shying away from the comparisons between the two dystopian worlds. In fact, Lionsgate began incorporating “Divergent” marketing materials into its “Hunger Games” campaign beginning at San Diego’s Comic-Con convention last July, and included the “Divergent” trailer in front of “Catching Fire” in theaters.

But unlike the second film in the “Hunger Games” trilogy, which at $161.1 million scored the fourth-highest opening weekend of all time, Lionsgate is tamping down expectations for “Divergent’s” debut.  “We are not putting the burden of our previous properties onto this film,” says Rob Friedman, co-chairman of Lionsgate Motion Picture Group.

David Bank, an analyst with RBC Capital Markets, notes that the studio has done “a pretty good job” of letting Wall Street know it’s not getting another “Hunger Games.” Still, he says investors want to see “Divergent” reach the mid-$100 million range domestically. Lionsgate says it plans to lay out $40 million in the U.S. to market the film, which will bow in more than 3,500 theaters.

In an unusual move, Woodley met a handful of times with the studio’s marketing department beginning in June 2013, and as recently as last week, to formulate an alternative promotional strategy for “Divergent.”

“What makes you diverge in modern-day society? How are you going to diverge from mediocrity? How can you go out of your way to change something?” posits the actress, who recently chopped her hair into a pixie cut similar to that of “Hunger Games” protagonist Lawrence, and professes personal preferences for herbalism and survival training. “Tris diverges from mediocrity and commits herself to something she believes in. So my slogan became ‘I believe in the good things coming,’ ” Woodley tells Variety.

Lionsgate has partnered with HarperCollins to print an edition of “Divergent” that’s tied to the movie, with a first run of 1.5 million copies. The imprint is milking its foreign publishing deals to coordinate promotions with Lionsgate’s international film distributors. “We’re united in pushing the ‘read it before you see it’ message,” says Jean McGinley, HarperCollins senior director of subsidiary rights.

Lucy Fisher and Doug Wick of Red Wagon Entertainment acquired film rights to the “Divergent” manuscript two months before HarperCollins published the book in April 2011. During the development process, Lionsgate acquired Summit for $412 million, while sales of the first two books in the trilogy boomed (“Allegiant” was published in October). “In the midst of figuring out our budget for the movie, the studio felt more comfortable allowing more scale, giving us more resources to make a better movie,” Wick says.

The production budget, which started in the low $70 millions, was increased to $85 million by the time “Divergent” was greenlit in December 2012. To help offset costs, Summit secured $65 million in international pre-sales, leaving the company to invest only $20 million in funding production of the film. Still, that’s higher than the minimajor’s $13 million average cost per film, according to what Lionsgate CEO Jon Feltheimer told analysts during a post-earnings call last February.

“Studios often put up a gauntlet of obstacles,” Fisher says. “In this case, Summit cleared a wide path.”

“My first reaction when I read the book was uncertainty, like, ‘Is this too close to other movies?’ ” admits Burger. “But it grew on me, particularly Tris going from being an ordinary person to a warrior who did the hard work to make that change.”

Although Fisher and Wick quickly hired the 22-year-old Woodley, they struggled to find a suitable love interest for her character.

“We met every would-be star who everyone thought was about to break,” recalls Wick, adding that almost all of those who were screen-tested seemed boyish next to the actress. James, a 29-year-old British thesp who tested in the third round of casting, hadn’t been on anybody’s radar, Wick acknowledges.

The producers chose to remain true to the book concerning Tris’ romantic evolution and physicality. For instance, the means of transportation for those in Tris’ faction includes jumping on and off moving El trains — which Berger calls the biggest production challenge of the film.

But Fisher and Wick also knew they would alter parts of the story, most notably adding a confrontation at the end of the movie between Tris and a different faction’s leader, played by Kate Winslet.

Lionsgate is hopeful “Divergent” will not diverge from the lucrative path of “Twilight” and “Hunger Games,” the latter of which has two sequels remaining. Production on “Insurgent” starts in May in Chicago, with “Red” director Robert Schwentke, selected after Burger opted out due to the compressed schedule.

“Assuming the movie works as we expect, we like the idea of a ‘Divergent’ film every March to complement our ‘Hunger Games’ films every November,” explains Lionsgate vice chairman Michael Burns.

For the studio, that’s a utopian dystopian future.