Watch: New ‘Dawn of the Planet of the Apes’ Teaser Reveals the Ape Army 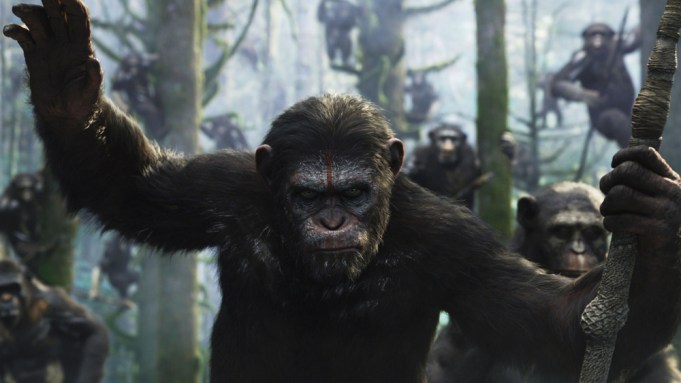 “You know the scary thing about them?” asks the voiceover in the new “Dawn of the Planet of the Apes” teaser. “They don’t need power. Lights, heat — nothing.”

Those watching “The Walking Dead” Sunday night went from zombies to apes, as a new teaser for the “Rise of the Planet of the Apes” sequel premiered during the season closer. Though it lasts a mere 44 seconds, it takes off right in the first shot, opening a large set of doors to a large army of apes on horseback.

The sequel takes place years after its 2011 predecessor. The group of apes led by Ceasar (Andy Serkis) is threatened by a band of humans that survived a devastating virus. “Rise of the Planet of the Apes” grossed $481 million worldwide and received well critically, nabbing a nomination for visual effects at the Academy Awards.

“Dawn of the Planet of the Apes” is directed by Matt Reeves and stars Serkis, Gary Oldman, Jason Clarke and Keri Russell. It hits theaters July 11.