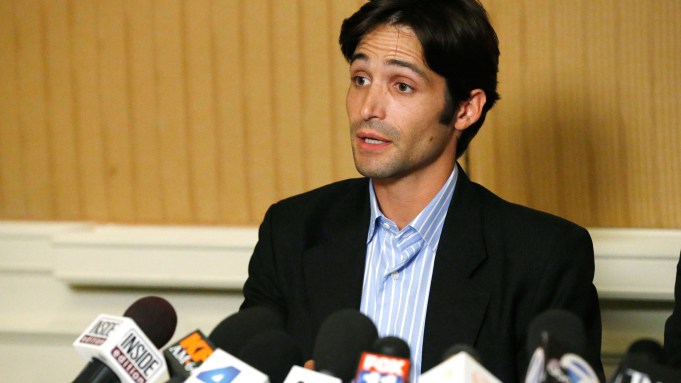 “I would not wish on my worst enemies what I went through,” declared plaintiff Michael Egan at a Monday news conference at the Four Seasons in Beverly Hills.

Ancier is the former president of BBC Worldwide America and also served as head of programming for Fox, NBC and the WB. He’s also the head of year-old Quad Media Partners, formed to launch four fully curated linear TV networks.

Neuman, the former president of Disney TV, previously worked for Digital Entertainment Network, which was headed by Marc Collins-Rector, who was cited as being involved in the sexual activity at the heart of Egan’s original lawsuit against director Bryan Singer.

Goddard heads a design firm in Los Angeles that has created theme park attractions for Universal Studios. He also heads The Goddard Group, which has produced live shows on and off Broadway.

Alan Grodin, an attorney for Goddard and a partner at Weintraub Tobin Chediak Coleman Grodin, issued a statement: “Gary Goddard is out of the country and we have not seen the complaint.  Based on what we have heard, the allegations are without merit.  Once we have seen the complaint we will respond appropriately.”

Ancier did not immediately respond to a request for comment.

As with the suit against Singer, Egan made four claims against each of the three execs — intentional infliction of emotional distress, assault, battery and invasion of privacy by unreasonable intrusion. Each of the suits recounted in explicit detail the sexual acts that took allegedly place between Egan and each of the men in Hawaii in 1999.

“Somebody has to stand up to these people,” said the 31-year-old Egan.

The suits are also seeking at least $300,000 in damages and attorney’s fees.

The filings were unveiled at a news conference Monday at the Four Seasons Hotel in Beverly Hills by attorney Jeff Herman, Egan and his mother.

“It’s not about money, it’s about disarming these powerful pedophiles,” the alleged victim’s mother, Bonnie Mound, told reporters through tears.

The new lawsuits were filed five days after “X-Men: Days of Future Past” director Singer was accused of sexually abusing a teenage boy in 1999 in a suit filed in the same court, alleging Collins-Rector had lured him into the sex ring with promises of auditions for work as an actor and model. Egan claims he was 15 years old when Singer forcibly sodomized him, among other allegations.

Bryan Singer’s attorney, Marty Singer, has called the lawsuit “absurd and defamatory” and has promised that he will file a countersuit.

Herman is a sexual abuse attorney based in Boca Raton, Fla., who also represented the plaintiffs accusing Elmo puppeteer Kevin Clash of sexual abuse. The three Clash cases were thrown out last July because the claims were made more than six years after each man reasonably should have become aware of Clash’s alleged violations and over three years after each turned 18.

Herman had said last week that he expected to file additional cases against alleged perpetrators by April 24 in Hawaii. That is the cutoff date for old sex abuse cases to be filed under a two-year window established by the state legislature, which temporarily suspends the statute of limitations in civil sex abuse cases.

Singer’s attorney claims the filmmaker has documents to prove that in late 1999 he was not Hawaii but in Toronto, shooting the first “X-Men” movie, which would disprove Egan’s account of sexual abuse.

“We want to see those documents,” Herman said in response on Monday, adding that he has witnesses to prove that Singer was in Hawaii at the time of the alleged incidents.

Herman said Monday that Egan met with the Federal Bureau of Investigation and the Los Angeles Police Dept. in 2000. He also said the FBI was made aware of the names of all four defendants at that point.

Mound also expressed frustration that letters she wrote to FBI agents in 1999 and 2000 and information that her son provided in interviews with an agent did not result in criminal charges.

The FBI has said it could not discuss specifically what Egan told them but denied in a statement last week that it had ignored the case.

“However, the suggestion that the FBI ignored evidence involving the sexual victimization of a child is ludicrous,” spokeswoman Laura Eilmiller said. “The FBI vigorously pursues all allegations involving the sexual abuse of minors and pursues prosecution when evidence of such crimes is brought to its attention.”

Additionally, Herman said that he has heard from “dozens” of other victims since he filed the Singer last week, adding, “I’m going to continue to file cases to expose these predators.”

Sources recently confirmed to Variety that Oscar-nominee Amy Berg has spent the last two years working on a new documentary about sex abuse in Hollywood that includes allegations about Bryan Singer. Michael Egan has been cooperating with Berg on her documentary.

Marty Singer has asserted that the lawsuit against Bryan Singer is an attempt to get publicity with “X-Men: Days of Future Past,” opening May 23. Bryan Singer has canceled two major appearances in support of the upcoming tentpole, skipping last weekend’s WonderCon in Anaheim and the upcoming Creativity Conference in Washington.

Each of the suits also names Collins-Rector although he is not named as a defendant. Herman said Monday that Collins-Rector was the “ringleader” in initiating the sexual abuse of Egan at a house in Encino, known for “notorious parties” where underage male teenagers would be intoxicated and sexually assaulted.

Collins-Rector is a registered sex offender, having pleaded guilty in 2004 to luring minors across state lines for sexual acts.

Herman also said Ancier, Goddard, Neuman and Singer were all members of a “sex ring,” adding that the group was one of several operating in Hollwood to take advantage of people’s desire to get into the entertainment business.

“I think this is a watershed moment for Hollywood,” Herman declared.

Asked at the news conference what he would say to the defendants, Egan responded, “You can’t have another chance to hurt another victim.”