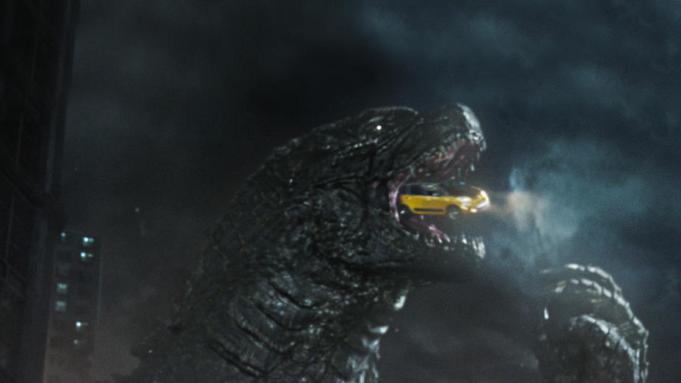 If it’s summer, it means car companies are revving up plans to promote summer movies, and Fiat has rolled out a clever commercial themed around Legendary Entertainment’s “Godzilla,” in which the iconic monster is on a rampage through a city in search for the small Italian cars to munch on.

The ad works on every level. Not only does it tell a story in a 30 seconds that appears to be set within the world Legendary has created for its new film, it uses humor in an effective way to promote the company’s larger 500L — the car is larger than the regular two-door version and causes Godzilla to choke after popping 500s like candy. “The four-door Fiat 500L: it’s a lot bigger than you think,” says voiceover after the monster spits it out.

On top of that, Fiat worked closely with Legendary and visual effects house Moving Picture Company to produce original footage that features the “King of the Monsters” from the film, that Warner Bros. unleashes in theaters May 16. Snickers takes a completely different approach with its own “Godzilla” effort.

In fact, playing with tone could help Legendary out as its film campaign for “Godzilla” focuses on the seriousness of its monster mash up and the devastating effects the giant beasts in the film have on cities like San Francisco, Honolulu and Las Vegas. Promos from Fiat and Snickers lighten up its efforts and play with Godzilla’s pop culture status.

The idea for Fiat’s campaign was to show how its range of models offer a car “for every taste,” according to the company’s marketing chief Olivier Francois.

But Fiat would also serve up an example of what movie marketers should strive for when working with their promotional partners.

While automakers have long seen summer movies as a high-profile way to promote their newest vehicles given the amount of moviegoers that flock to them — just look at General Motors’ involvement with the “Transformers” franchise, Universal’s “Fast & Furious” franchise or even Audi in the “Iron Man” films — their ads associated with them typically stall out.

That’s because car marketers normally must rely on footage from the films, forcing them to produce montages of their vehicles driving down roads mixed with scenes from the tentpoles they appear in. Doing that is never memorable and always makes it seem as if the brand was never really involved with the film as a true partner.

When anyone with a YouTube account can create a similar video, any intention to stand out — or use Hollywood as a way to truly put their products in the spotlight — is lost.