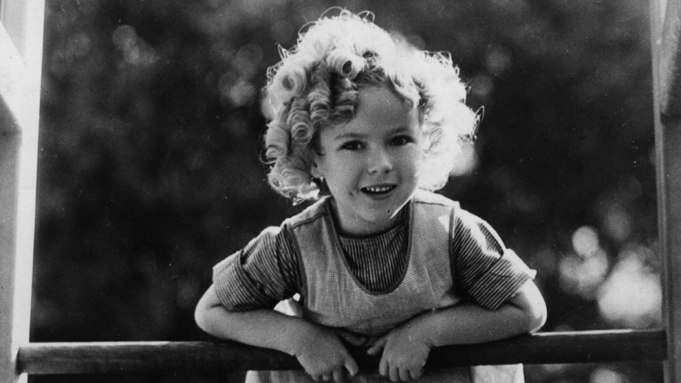 Shirley Temple, the child star phenomenon of the 1930s who went on to a career in international diplomacy, died of natural causes Tuesday at home in Woodside, Calif. She was 85.

A string of non-stop hits starting with “Little Miss Marker” in 1934 and continuing with such films as “Captain January,” “Poor Little Rich Girl” and “Wee Willie Winkie” captured America’s heart, keeping the troubled 20th Century Fox solvent during the Depression. By 1938, Fox, for which she earned some $30 million, had upped her salary to $10,000 a week.

Studio chairman Jim Gianopulos hailed her legacy and her work off the screen.

“As the world mourns the loss of ‘America’s Little Darling,’ we remember not only one of the most prolific child stars to ever grace our screens, but also a woman whose achievements reached far beyond her Hollywood career,” he said. “Shirley Temple Black remains an integral part of Twentieth Century Fox’s heritage and the bronze sculpture of her that flanks the Shirley Temple Black Child Development Center on the Fox Lot serves as reminder of her enduring legacy and her ability to unite and entertain both young and old.”

The dimpled, blonde, curly-headed Temple was the nation’s top box office attraction from 1935-38 and one of the nation’s top wage earners. Reflecting the extent of her popularity, she received 135,000 birthday cards on her 11th birthday.

In a statement released this morning, SAG-AFTRA president Ken Howard said, “Shirley was a terrific actor whose vibrancy and brilliance set audiences on fire at a crucial time in our nation’s history. More important, she was a conscientious and caring citizen whose work on behalf of her union and her country exemplified true service. She was a true icon of the entertainment industry and beloved of our her colleagues in the acting profession.”

Temple did not survive the transition to adult performer as other stars such as Elizabeth Taylor, Mickey Rooney and Natalie Wood did. Though she continued appearing in films until the late 1940s, she was never able to live up to her years as a child star — or live them down, for that matter.

After surviving a serious illness due to complications from childbirth and, later, a mastectomy, Temple evolved into a diplomat. She ran unsuccessfully for Congress from San Mateo County, Calif. She was U.S. representative at the United Nations, ambassador to Ghana, U.S. chief of protocol under President Gerald Ford and President George H.W. Bush’s ambassador to Czechoslovakia.

But in her heyday, Temple was a national treasure and an American icon, as big a star around the world as Greta Garbo or Charlie Chaplin. And though, except for a brief TV stint in the late ’50s, Temple was never onscreen after the 1940s, subsequent generations grew up with her films on television and video.

She was born in Santa Monica, the third child and only girl of George and Gertrude Temple. Her mother enrolled her at age 3 in Meglin Dancing School, where in 1932, she was spotted by movie talent scout Charles Lamont. She was soon appearing in a series of shorts called “Baby Burlesks,” in which child actors spoofed current adult stars such as Marlene Dietrich.

In 1933, she was chosen by songwriter Jay Gorney to do the musical number “Baby Take a Bow” in the musical “Stand Up and Cheer.” She stopped the show cold in her one appearance and became an instant star by stealing “Little Miss Marker” from an openly resentful Adolphe Menjou. Under contract at Fox, she was earning $150 a week (as well as a separate salary for her mother) when she made her studio debut in “Baby Take a Bow” in 1934, a year in which she made eight films including “Now and Forever” and “Bright Eyes.” She ended up in eighth place in the box office polls.

The next year she skyrocketed to the top, ahead of Clark Gable, Mae West and Joan Crawford, with such films as “Curly Top,” “The Little Colonel” (in which she danced with Bill “Bojangles” Robinson) and “The Littlest Rebel.” Her rendition of “Good Ship Lollipop” was a national sensation, and the tune essentially became her theme song.

She received a special Academy Award in 1935 and remained America’s sweetheart over the next four years in more than 20 films including “Heidi,” “Rebecca of Sunnybrook Farm,” “The Little Princess,” “Dimples,” “Little Miss Broadway” and “Stowaway.”

Licensing of Temple’s likeness also brought in substantial sums during the peak of her popularity in the late 1930s. Temple paraphernalia was packaged in boxes of Wheaties, and Shirley Temple dolls generated sales of $45 million before 1941, according to Temple’s autobiography.

When she was 12, Temple had her first box office flop, “The Bluebird,” followed by another disappointment, “Young People.”

Her parents exercised their option to buy out Temple’s contract from Fox for $300,000. They enrolled her in the Westlake School for Girls for a formal education.

In 1941, MGM’s Louis B. Mayer, who had wanted to use her as Dorothy in “The Wizard of Oz” but couldn’t get her, signed Temple with the goal of adding her to the Judy Garland-Mickey Rooney film team but ended up paying her $2,500 per week to be in “Kathleen,” which didn’t succeed; 1942’s “Miss Annie Rooney,” at United Artists, also performed poorly.

Temple continued her studies for the next two years until David O. Selznick signed her for “Since You Went Away,” a big-budget war romance with Claudette Colbert and Jennifer Jones. It was followed by “I’ll Be Seeing You,” which starred Ginger Rogers.

In 1945, at age 17, Temple married 22-year-old John Agar, the son of a wealthy Chicago Meat packer who had acting aspirations of his own. They starred with John Wayne in John Ford’s 1948 Western “Fort Apache” (the couple also starred together in “RKO’s “Adventure in Baltimore” in 1949.) The marriage produced a daughter, Linda Susan.

By then, Temple’s career had come to a grinding halt. Despite the occasional success such as “The Bachelor and the Bobby-Soxer” and “That Hagen Girl” (which was Temple’s favorite),  she sputtered out with such films as “The Story of Seabiscuit” and her last pic, “A Kiss for Corliss.”

She auditioned for but did not secure the role of Peter Pan on Broadway in August 1950 and announced her official retirement from films in December.

She divorced Agar in late 1949 and she married the wealthy Charles Alden Black in December 1950. When Black was called to active duty during the Korean War, she followed him to Washington. Complications from a Caesarean delivery of the Blacks’ first child, Charles Jr., led to pleurisy, and Temple (by then Temple Black) was critically ill for several weeks. In 1954, she had another child, Lori, and the Blacks moved to San Mateo, just south of San Francisco.

In 1958 she appeared on television as host and occasional actress in NBC fairy-tale anthology series “The Shirley Temple Storybook.” It lasted a year.

Another effort, “The Shirley Temple Show,” in 1960, was similarly unsuccessful, but Temple Black made guest appearances during the early 1960s on programs including “The Red Skelton Show” and “Sing Along With Mitch.”

In January 1965, she starred in the sitcom pilot “Go Fight City Hall,” in which she portrayed a social worker, but the show never went to series.

What began as volunteer charity work and a commitment to environmental causes led to Temple running for Congress in 1967. She lost to Pete McCloskey. Active in Richard Nixon’s 1968 election campaign, she was rewarded by the president with an appointment as a U.S. delegate to the United Nations. Her work led to her appointment as a delegate to the International Environmental Council in 1972.

That year she underwent a mastectomy to remove a malignant tumor. She received 50,000 letters of sympathy and went on to speak publicly about breast cancer, which at the time was not discussed widely.

Temple Black sat on the boards of corporations and organizations including the Walt Disney Co. and the National Wildlife Federation.

In 1974, President Gerald Ford appointed her ambassador to Ghana and in 1976 he brought her back to Washington as the first woman chief of protocol.

After Ford lost the 1976 election, she returned home. A decade later, George H.W. Bush named her as ambassador to Czechoslovakia.

Her autobiography, “Child Star,” was published in 1988, and in 2001, she served as a consultant on an ABC telepic adaptation called “Child Star: The Shirley Temple Story.”

Temple received the Kennedy Center Honors in 1998 and the Screen Actors Guild’s life achievement award in 2005.

Black and Temple remained married until his death in 2005.