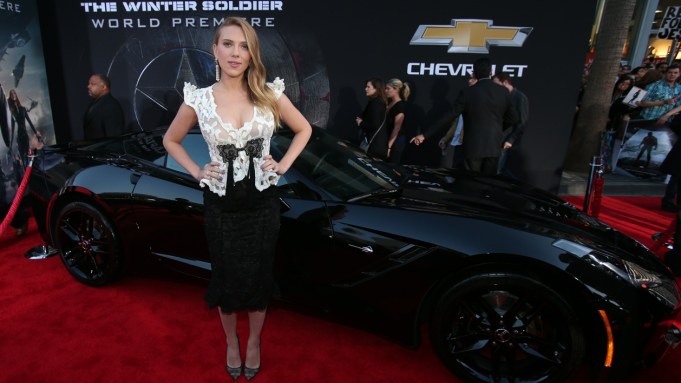 General Motors has turned to Marvel’s star-spangled superhero Captain America to help promote the launch of Chevrolet’s line up of vehicles, including the newest version of its Corvette Stingray.

The first part of the multi-platform campaign built around “Captain America: The Winter Soldier,” out in theaters April 4, launched over the weekend, with kids playing the characters in the sequel, before one climbs into a Chevy Traverse SUV when his mom picks him up from school.

The spot was directed by Anthony and Joe Russo, who also helmed “The Winter Soldier”  and will return for a third “Captain America” installment planned for 2016.

After having teamed up mostly with Michael Bay and Paramount’s “Transformers” franchise in the past, and TV series like “Hawaii Five-O” and “Nashville,” Chevy wanted to pair up with Marvel because it felt the “Captain America” franchise was a natural way for it to grow the brand around the world, especially as Marvel’s films continue to captivate audiences worldwide. It also wanted a film that offered up strong action sequences for Chevrolet’s line up of cars and trucks.

In addition to the Corvette, the Chevy Tahoe SUV is also featured in the sequel.

In “The Winter Soldier,” the Corvette is mostly associated with Scarlett Johansson’s Black Widow character. Harley-Davidson has aligned with Captain America in the first film and “The Avengers.”

“The Corvette represents technology, sophistication, intelligence, performance and beauty just like the Black Widow character,” Tihanyi said. “Being able to align the two made for a great opportunity to include the Corvette in the film.”

Brands typically don’t know how their products will be featured in the final cut of a film.

But Chevy wasn’t disappointed with its presence in the “Captain America” sequel. The Corvette is prominently featured in the first 10 minutes of the movie, with Black Widow pulling up in the American muscle car, impressing Anthony Mackie’s character in the film.

“Our Chevy products are represented very well and are positioned in wonderful heroic roles and situations,” Tihanyi said.

Tihanyi said the concept for the ad came from a visual he sent of a little boy in a super hero costume to CAA’s marketing group.

“I asked them to use it as the inspiration for a spot that focused on the imagination of children at play,” he said. The Russos ended up directing the final result, “Rich Imagination.”

“They were always our first choice,” Tihanyi said. “This gave us a true, authentic approach to the development of the spot by placing the kids directly into the role of the actors from the film in the exact same environments. The Russos provided this wonderful take on the scenes from the film with children in an imaginary world of play.”

Chevy’s campaign began rolling out over the weekend, with the spot bowing on YouTube. The tie-in to “The Winter Soldier” will be pushed across key global territories.

The carmaker’s last major movie tie-in was around DreamWorks’ NASCAR-themed “Turbo,” an animated film which wound up disappointing at the box office. Its vehicles will also be prominently featured in this summer’s “Transformers: Age of Extinction,” with the character of Bumblebee once again played by a Camaro.