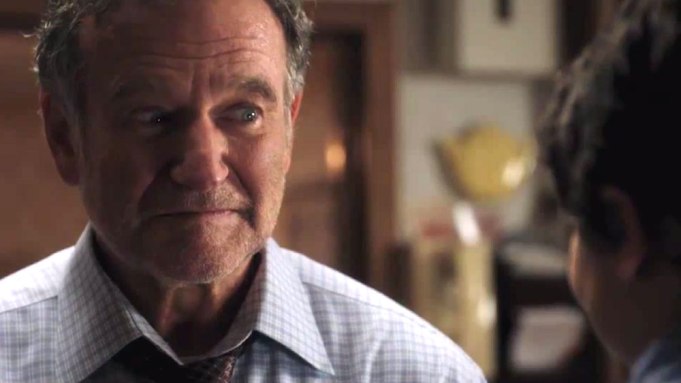 Everyone’s favorite onscreen dad, Robin Williams, played a father and grandfather in “A Merry Friggin’ Christmas,” the last movie he filmed before his death.

A new clip from the holiday comedy shows his character Mitch giving his grandson unconventional advice about what to leave for Santa Claus in lieu of milk and cookies.

“I know something that Santa loves a lot more than milk and cookies,” he says before revealing a bottle of bourbon and a plate of asparagus. This scene may be difficult to watch considering the fact that the actor struggled with alcoholism early on in his career.

“Robin’s sobriety was intact,” his wife Susan Schneider said in a statement on Thursday. “He was brave as he struggled with his own battles of depression, anxiety as well as early stages of Parkinson’s Disease, which he was not yet ready to share publicly.”

In the film, Williams plays Joel McHale’s estranged father who’s trying to make up for lost time during a blizzard road trip.

In addition to this comedy, Williams completed three other yet unreleased films: “Night at the Museum: Secret of the Tomb,” “Boulevard” and “Absolutely Anything.”

“A Merry Friggin’ Christmas,” which also stars Lauren Graham and Candice Bergen, opens in theaters and video on demand on November 7.