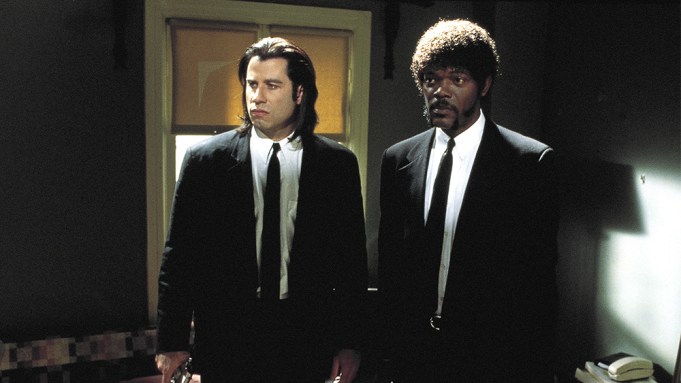 Like a shot of adrenaline to the heart, “Pulp Fiction” changed the movie landscape when it opened on Oct. 14, 1994. Quentin Tarantino’s ode to crime and pop-culture was a bold new cinematic vision in a decade that badly needed one. Before “Pulp Fiction,” prestige films like “Dances with Wolves” and “A Few Good Men” seemed content to play it safe, while blockbusters like “Jurassic Park” and “The Fugitive” focused squarely on the mainstream. Overnight, the term ‘Tarantinoesque’ became shorthand for audaciously stylized ultra-violence and genre-bending thrills. On its 20th anniversary, here’s why “Pulp Fiction” remains the coolest movie of the ’90s.

The Soundtrack: From the rumbling reverb of Dick Dale’s surf-rock rendition of “Misirlou” to the soulful crooning of Dusty Springfield’s “Son of a Preacher Man” and the strip club sexiness of Kool & the Gang’s “Jungle Boogie,” the “Pulp Fiction” soundtrack effortlessly mixes musical styles the way the film blends genres. The multi-platinum album reinvigorated surf-rock to the extent that Del-Fi Records released a competing compilation a year later titled “Pulp Surfin’.”

Razor-Sharp Dialogue: Eminently quotable and hilariously profane, Tarantino’s unmatched ear for dialogue was never sharper than in his Academy Award-winning script, co-written by Roger Avary. Less concerned with advancing a plot than in crafting a mood, every line crackles with the vibrant intensity of a Tesla coil. Conversations are treated like action sequences, and monologues, particularly those delivered by Samuel L. Jackson and Christopher Walken, are dazzling showstoppers.

John Travolta: Though the role was originally written for Michael Madsen, Tarantino was so impressed with meeting Travolta during casting on another project that he wisely sent him the “Pulp Fiction” script along with a handwritten note that said “Look at Vincent.” Rescued from a downward spiral of talking-baby/talking-dog movies, Travolta imbued the heroin-addicted hitman with a laconic charm that earned him his second Academy Award nomination for Best Actor.

Samuel L. Jackson: Having lost a role in “Reservoir Dogs” to another actor, Jackson’s first time reciting Tarantino’s dialogue came in Tony Scott’s “True Romance,” where he had a small yet memorable part. The role of Ezekiel-quoting hitman Jules Winnfield, however, was written specifically with him in mind. Despite his Jheri curl wig and pornstache, Jackson’s explosive portrayal of an evil man “trying real hard to be the shepherd” won him an Oscar nomination for Supporting Actor.

Bruce Willis: For the role of punch-drunk boxer Butch Coolidge, Tarantino was searching for someone who evoked the tough-guy era of the 1950s, like Robert Mitchum or Lee Marvin. Introduced to Willis at a barbecue thrown by Harvey Keitel, the “Die Hard” star let the director know that he’d read the “Pulp Fiction” script and was interested and available. Toning down his trademark smirk, the actor gave a beautifully understated performance as a palooka who just can’t catch a break.

Uma Thurman: In retrospect, it’s probably a good thing that Tarantino didn’t cast his first choice, Brigitte Nielsen, for the role of gangster moll Mia Wallace. Though many actresses were tested and considered, the sought-after part eventually went to Thurman, though the director initially thought she was wrong for it. Combining strength and vulnerability, and sporting a stunning black bob hairstyle, Thurman graces the film with its most sympathetic character.

Tarantino’s Structure: Like “Reservoir Dogs” before it, and many of his films since, the plot of “Pulp Fiction” is presented out of sequence, with overlapping episodes circling back on themselves, forcing the audience to piece it all together chronologically. Playfully built around three primary storylines, each identified with onscreen inter-titles, the ingenious structure keeps the viewer continually off balance, adding an extra layer of suspense to the already nerve-wracking material.

The Dance: Contrary to what most assume, the memorable dance scene between Vincent and Mia existed in the script long before the “Saturday Night Fever” star had been cast. With their stylized moves and eerily expressionless faces, the iconic sequence has been parodied in dozens of comedies, not to mention copied at countless proms and weddings. Echoing a similarly impromptu dance in Jean-Luc Godard’s “Band of Outsiders,” it’s a cinematic love letter from one director to another.

The Needle: In perhaps the most breathless scene in the film, Vincent and his three stoner friends are forced to plunge an adrenaline-filled needle directly into Mia’s heart after she overdoses on heroin. What begins as a blackly comic sequence quickly escalates to a moment of pure tension as Eric Stoltz steadily counts down to the big stab. When it finally comes, it’s gruesomely hilarious. As Rosanna Arquette says at the punchline of the scene, “That was fucking trippy!”

The Gimp: On first viewing, the line “Bring out the Gimp” makes absolutely no sense. It hangs there for a moment, an odd request from one psycho to another. And then, in a sequence that expertly combines gallows humor, nightmarish horror and sheer surprise, we meet the bizarre leather-clad slave of these two maniacs. Who the Gimp is, how he ended up there and what sinister purpose he serves are things we never learn. And that’s exactly why the scene is so unforgettable.

Yes, a Samurai Sword: It’s a deceptively small detail, but a crucial one. Freed from his attackers, Willis’s blood-soaked Butch is about to escape from the pawn shop when the unexpected happens: he develops a conscience and decides to save a man who just tried to kill him. But what tool to use? First he tests a hammer, then a baseball bat, then a chainsaw. Of course, it’s the samurai sword, an ancient weapon of honor, that he finally chooses. Audiences literally cheered at the selection.

The Chopper: After crashing his girlfriend Fabienne’s Honda and narrowly escaping the clutches of a pair of lunatic rapists, the bruised and battered Butch makes his getaway on a wholly impractical yet undeniably cool customized 1986 Harley-Davison FXR Super Glide, with the intriguing name “Grace” painted on its side. “Whose motorcycle is this?” Fabienne asks as she climbs on the bike. “It’s a chopper, baby,” Butch corrects her. The difference may seem minor, but it’s not.

What’s In the Briefcase? Popularized by Hitchcock, the term McGuffin refers to a plot device that motives a story’s characters, often with little or no explanation. And that’s exactly the purpose the enigmatic glowing briefcase serves in “Pulp Fiction.” Like the car trunk in “Repo Man” and the suitcase in “Kiss Me Deadly,” the contents matter less than the mystery. Yet that hasn’t stopped fans from speculating on what’s inside, with some even claiming it holds the soul of Marsellus Wallace.

The Coffee Shop: With its eye-catching Googie architecture, Holly’s coffee shop in the Los Angeles suburb of Hawthorne offered Tarantino the perfect location in which to begin and end his stylishly retro crime film. Renamed the Hawthorne Grill, the restaurant had closed down prior to shooting, but was rented specifically for the movie. After the film’s success, the diner briefly reopened, complete with a painted mural of Travolta and Jackson and cardboard cutouts of the actors placed in the booth where their scenes were filmed.