One Direction Concert Movie to Be Released on 3,000 Screens Worldwide 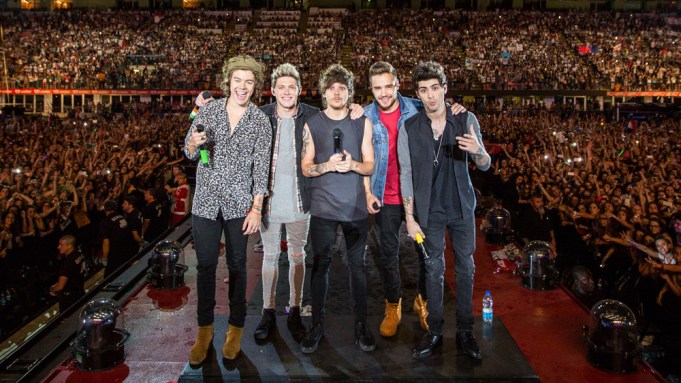 Arts Alliance plans a release of more than 10,000 screenings in over 3,000 screens across 50 or more territories, which it claims to be the biggest global “event cinema” release ever.

“Where We Are — The Concert Film” will play for one weekend, Oct. 11-12. The movie, recorded at the San Siro stadium in Milan, includes all of One Direction’s biggest hits, plus a 15-minute interview cut with exclusive behind-the-scenes footage. The band is on a 69-date global tour.

The pic is produced by Fullwell 73 and re-unites producing partners from the band’s first concert film, “This Is Us”: Ben Winston and executive producers Cowell, Sonny Takhar, Richard Griffiths, Harry Magee and Will Bloomfield. The first film grossed $69 million worldwide.

Mark Foster, CEO of Arts Alliance, said: “I’m delighted this will be Arts Alliance’s first pop release since the production and finance company Mr Wolf merged with Arts Alliance Media’s distribution arm. We intend this to be the first of many record-breaking theatrical releases.”

Yogita Puri, director of content at Arts Alliance, who negotiated the deal for the company, said: “We’re thrilled to be working with Syco, Sony Music and Modest! on what’s shaping up to be a landmark release for event cinema and the ultimate fan experience.”