Universal's R-rated comedy will vie for first with Sony's superhero 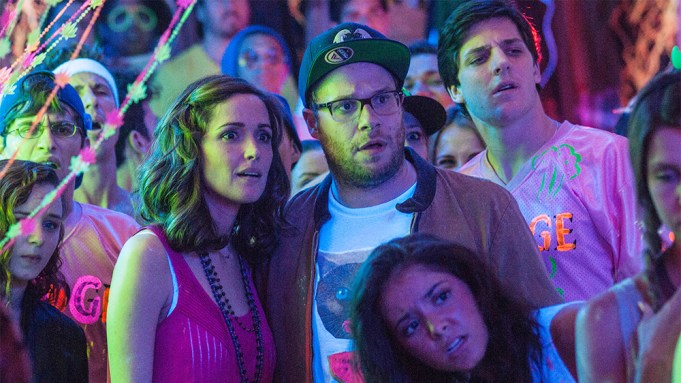 Building steady buzz over the past several weeks, Universal’s raunchy comedy “Neighbors” prepares to move in near the top of the domestic box office, rivaling “The Amazing Spider-Man 2,” with a potential mid-to-high $30 million three-day bow, according to industry observers.

The $18 million R-rated laffer, starring Seth Rogen and Zac Efron, came on strong with tracking last month; pic’s advanced ticket sales on Fandango also nearly double last year’s “This Is the End,” which opened to $20 million. Audience awareness for “Neighbors” could help it overperform just like “Ted,” which wound up crushing its mid-to-high $30 million expectations with an eventual $54 million domestic opening last year.

Meanwhile, Sony’s “Spider-Man” tentpole kicked off summer B.O. with close to $92 million, which should segue into a low-$40 million gross this weekend if the film drops between 50%-55% through Sunday. Last year, “Iron Man 3” fell 58% in its second weekend, while “Thor” dropped 47%.

The Spidey sequel soared opening weekend, but the pic’s gross likely was deflated somewhat by the prominance of “Captain America: The Winter Soldier” in the market.

Playability for “Spider-Man” has been strong during mid-weeks, however.

While “Spider-Man” should keep its stronghold with teens and some families, “Neighbors” is tracking best among women who could boost the pic’s prospects by organizing a “girls’-night-out.” Efron, who is shirtless throughout much of the movie, created a recent Internet sensation when he took off his shirt on-stage at the MTV Movie Awards.

As counter-programming to the outrageous frat pic, Sony-TriStar’s faith-based family comedy “Mom’s Night Out” bows at more than 1,000 locations, playing to the Mother’s Day moviegoing crowd. Pic is the third-biggest advanced ticket seller for Fandango so far this weekend.