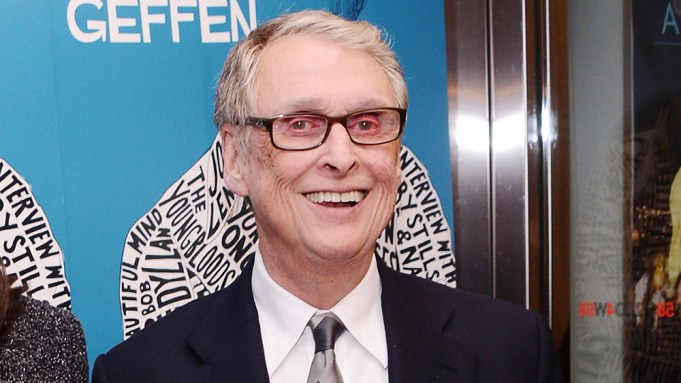 Mike Nichols, the award-winning director of Broadway and movies, died Wednesday in Manhattan at the age of 83. Nichols was the husband of ABC News anchor Diane Sawyer. A spokesman for ABC said the cause was cardiac arrest.

Nichols is one of few people to win an Emmy, a Grammy, an Oscar and a Tony — achieving so-called EGOT status. His first two feature helming efforts — the caustic “Who’s Afraid of Virginia Woolf” in 1966 and 1967’s satirical “The Graduate” — launched a prodigious movie career. But before ever stepping behind the camera, he was already part of a successful comedy duo with Elaine May and had helmed a string of hit stage shows.

Nichols’ background in improvisational, satirical comedy informed many of his films, which often started out as comedies and ended up as acerbic ruminations on American relationships. Directing material by playwrights, screenwriters and novelists such as Edward Albee, Nora Ephron and Patrick Marber helped his dialogue and staging seem edgy but not rough, sophisticated but not soulless.

As a feature helmer, Nichols was known for coaxing remarkable performances out of sometimes unlikely thesps such as singer Cher, who earned her first Oscar nom for her supporting role in Nichols’ “Silkwood” (1983). He directed 16 different actors to Oscar-nommed performances, including Elizabeth Taylor, Dustin Hoffman, Richard Burton and Meryl Streep (twice). He once famously said: “I love to take actors to a place where they open a vein. That’s the job. The key is that I make it safe for them to open the vein.”

In the early ’50s, he attended the U. of Chicago, where he joined improv group the Compass Players, the precursor to Second City, and met May. They became a successful comedy duo, appearing in nightclubs and on television before taking their act to Broadway in 1960 with “An Evening With Mike Nichols and Elaine May.”

Nichols’ Grammy, for comedy performance, came in 1961 for the original cast recording of that Broadway show. Their second comedy album, “Mike Nichols and Elaine May Examine Doctors,” was also nommed for a Grammy.

Nichols and May parted ways in 1962, and Nichols shifted to helming theater productions, winning eight directing Tonys over the course of his career.

It was in the theater that Nichols found another collaborator in playwright Neil Simon. In the course of his career, Nichols tackled five Simon plays: “Barefoot in the Park” (1963), starring Robert Redford and Elizabeth Ashley; “The Odd Couple” (1965), with Walter Matthau and Art Carney; 1968’s “Plaza Suite,” starring George C. Scott and Maureen Stapleton; “The Prisoner of Second Avenue” (1971), with Peter Falk and Lee Grant; and “Fools,” Simon’s 1981 romantic comedy set in the Ukraine. Nichols won helming Tonys for all but “Fools.”

After his stage successes with “Barefoot” and “Odd Couple,” Nichols got his start directing features when Taylor wanted him to helm “Who’s Afraid of Virginia Woolf?” in 1966. The film earned 13 Academy Award nominations, including a directing bid for Nichols and acting noms for the four stars. Taylor picked up the actress trophy, and Sandy Dennis won for supporting actress. Though Nichols didn’t win an Academy Award, the pic’s other Oscars and the critical acclaim pegged the first-time film helmer as a talent to watch.

He won his only directing Oscar the next year for his second film, “The Graduate,” which received six other Oscar noms, quickly raising him to the ranks of top directors. After the success of “The Graduate,” which became a touchstone for the 1960s generation with its memorable quote on plastics, he became the first director to be paid $1 million for directing a movie, 1970’s “Catch-22.” That film failed to catch on with auds, as did his next, “Carnal Knowledge” (1971), although it holds up well as a study of sexual revolution mores.

The director became choosier with projects after helming “Day of the Dolphin” (1973), which didn’t do well at the box office or with critics, and “The Fortune” (1975), which had moderate success. The New Yorker film critic Pauline Kael suggested in her review of “Dolphin” that if the best subject that Nichols and screenwriter Buck Henry could think of was talking dolphins, they should quit making movies altogether. However, Variety’s review of the film said: “The story climax strains belief, but Nichols is one of a handful of directors who can get away with occasional improbability.”

Except for helming concert film “Gilda Live,” starring comedian Gilda Radner, in 1980, Nichols stayed away from filmmaking for several years, focusing instead on the stage: He produced the Tony-winning tuner “Annie” in 1977 and directed several plays.

He returned to films in 1983 with the critically praised “Silkwood,” which earned five Oscar noms, including one for his direction and acting bids for Streep and Cher. He followed with “Heartburn” in 1986 (again starring Streep), and two movies in 1988: the adaptation of Neil Simon’s “Biloxi Blues” and “Working Girl,” which earned six Academy Award nominations, including another bid for Nichols as director.

Nichols worked steadily in films during the 1990s, starting with another Streep starrer, “Postcards From the Edge” (1990), followed by “Regarding Henry” (1991); “Wolf” (1994); Robin Williams starrer “The Birdcage,” an English-lingo redo of French laffer “La Cage aux Folles” (1996); and 1998’s political dramedy “Primary Colors.” Both “Birdcage” and “Primary Colors” reunited Nichols with his former partner Elaine May, who adapted the pics for the screen.

After helming box office disappointment “What Planet Are You From?” (2000), a sci-fi comedy starring Annette Bening and Garry Shandling, Nichols turned his attention to big projects for the smallscreen.

In 2001, Nichols helmed HBO’s adaptation of the Margaret Edson play “Wit” starring Emma Thompson. He and Thompson had collaborated on writing the adaptation. The project earned Nichols his first Emmys, one for directing and one as exec producer of the telepic, which won as the year’s best made-for-TV movie.

He followed “Wit” in 2003 with another HBO project, “Angels in America,” the miniseries based on Tony Kushner’s epic play. In 2004, the mini broke the record for the most Emmys awarded to a program in a single year, winning 11 out of the 21 awards for which it was nominated. Nichols picked up another helming trophy in the haul. (That record was later broken by HBO’s “John Adams” in 2008.) In its review, Variety wrote: “Just as there was no real precedent for the achievement ‘Angels in America’ represented in the legitimate theater, so are there few film adaptations of stage works comparable to what Mike Nichols has done with Tony Kushner’s two-part epic. Fully capturing the grandeur, extravagance, urgency, poetry and humor of the produced play, the savvy veteran director has brought out an elemental dimension of emotional melodrama that makes the piece compulsive screen fare without subtracting one bit from its status as great theater.”

Nichols returned to the bigscreen in 2004 with yet another play adaptation, “Closer,” then jumped back to the stage to helm the Monty Python tuner “Spamalot,” picking up another helming Tony along the way.

Throughout his life, Nichols had a few acting roles in a few short films and plays, including a stint with May in a 1980 production of “Who’s Afraid of Virginia Woolf” at the Long Wharf Theater in New Haven, Conn.

He returned to Broadway in 2012, directing a revival of “Death of a Salesman” starring Philip Seymour Hoffman. The play won the Tony for best revival, and Nichols collected yet another directing Tony.

He directed Daniel Craig and Rachel Weisz in a Broadway revival of Harold Pinter’s “Betrayal” in late 2013.

Nichols, born Michael Igor Peschkowsky, was born in Berlin. He fled Germany to the U.S. with his family in 1939 and became a naturalized U.S. citizen in 1944, eventually graduating from the U. of Chicago after a difficult and friendless childhood. After going bald as a child due to a whooping cough vaccination, he wore wigs the rest of his life.

Nichols was honored by the Directors Guild of America with a lifetime achievement laurel in 2000, was awarded the National Endowment for the Arts National medal in 2001 and received the Kennedy Center Honors in 2003. In 2010, he received AFI’s life achievement award.

Nichols had recently been involved in a new project for HBO to adapt “Master Class,” Terrence McNally’s Tony Award-winning play about opera legend Maria Callas. The project reunited him with Streep, one of his most frequent collaborators. She once said of Mike, “no explanation of our world could be complete and no account or image of it so rich, if we didn’t have you,” in hailing him as one of the essential artists of our time, according to a statement from James Goldston, president of ABC News.

Nichols is survived by fourth wife Sawyer, to whom he had been married since 1988; a son, Max, a director; and two daughters, Daisy and Jenny. He is also survived by a brother and four grandchildren.

(Pat Saperstein and Brian Steinberg contributed to this report.)