Absence of railroad reps at shoot suggest shoot was unauthorized 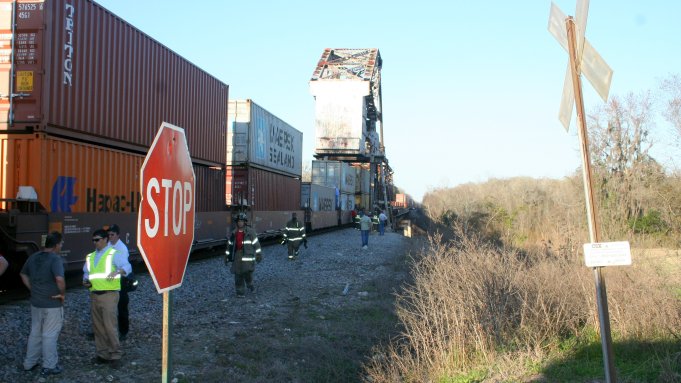 The homicide investigation into the death of Sarah Jones on the set of “Midnight Rider” is focusing on who decided to put the crew on the railroad bridge where the accident occurred and how the crew got access to the property, a source familiar with the investigation told Variety on Thursday.

The answer to the second question appears to be easier to answer. A spokesman for Rayonier, the paper company that owns the land surrounding the rail line at the site of the accident, confirmed to Variety that Rayonier had given permission for the film shoot to be on its property, but it cannot give permission for  the crew to be on the tracks, which are owned by CSX. A gate in a fence on the property bears a sign saying access is controlled by Rayonier guards.

But did the CSX railroad give permission for the film crew to be on the tracks? Wayne County, Ga., detective Joe Gardner has said publicly that the railroad says it did not give such permission.

One crucial indicator of the answer would be whether there was a railroad rep on site for the shoot, because experts contacted by Variety say it is inconceivable that a railroad would allow shooting on an active rail line without having one of its own officials on site to ensure safety.

Asked whether there was a railroad official on site for the shoot, Wayne County Sheriff John Carter told Variety, “None that I am aware of.” He stressed, however, that the investigation is continuing and additional people are being interviewed. Meanwhile WTOC-TV in Savannah reported, “Union reps say it wasn’t a scheduled shooting day and no set medic or railroad safety officer was on set.”

Carter said it is not yet known whether the leaders of the production unit put the crew on the trestle knowing they did not have permission to shoot there, or whether there was some kind of miscommunication between the railroad and the “Midnight Rider” team.

“That is our question. That is what we are trying to resolve too,” said Carter.

Randall Miller is the writer-director of “Midnight Rider” and his wife, Jody Savin, is writer-producer. Their production company, Unclaimed Freight Productions, was making the picture. Meddin Studios of Georgia was providing production services. Open Road Films was on board to distribute. Allman has executive producer credit. Jay Sedrish is unit production manager and executive producer. Charley Baxter was location manager.

Cohen & Gardner, the legal reps for the production, did not respond to numerous requests for comment.

Carter stressed that the investigation into the death of Jones and the injuries suffered in the Feb. 20 accident is continuing, and has no timeline for completion. He said the results will be turned over to the Wayne County District Attorney. “We’re going to try to find the facts and let them determine (whether there is a case),” said Carter.

Rules for shooting on or near railroad tracks call for railroad personnel to be present and for stringent safety measures beyond that. On a bridge, those protections would include fall protection and safety harnesses. Rules are even more stringent when a production wants to put an obstruction on the tracks. “Midnight Rider” was filming a dream sequence on a railroad trestle and had put a hospital bed on the tracks when a train arrived too quickly for the crew to clear the tracks and escape the bridge.

Jones was killed when a piece of the shattered bed struck her as she was trying to get off the bridge and knocked her into the path of the train. Other crew members suffered broken bones or other injuries from flying debris.

Hair stylist Joyce Gilliard, who had to be airlifted to a trauma center following the accident with a severe injury to her arm, posted on Twitter: “I have metals and pins holding my arm together,” and “I was hit by the train and not the debris. The worst day in my life. I will need counseling. My coworker died beside me.”

Funeral services for Jones were held on Wednesday in Columbia, S.C., with hundreds of people in attendance. Miller and William Hurt, one of the film’s stars, were there, along with about 20 crew members.

Variety has contacted assistant directors and and railroad safety experts who work with film shoots. All agree that any shooting on an active railroad track would require a railroad rep on site.

William Paul Clark, an assistant director whose credits include “Django Unchained,” “The Mechanic” and “Rambo,” said, “Whenever you’re on any location, even if you’re at a house, you have a representative from the house. You have a representative of the management company or home or whatever it is, and that’s just children playing in the backyard.” That is even more important in a dangerous environment, said Clark. “We have a safety adviser there, a consultant to make sure we’re working within the parameters of safe guidelines.”

In the case of “Midnight Rider,” said Clark, he would have expected reps from Rayonier and CSX to be present as long as shooting was on their property.

The “Midnight Rider” call sheet for Feb. 20, obtained by Variety, calls the day “Pre-Shoot Day 1 of 1.” It has become a common practice in film production to use “pre-shoot” or “camera test” days to grab vistas, inserts, and other miscellaneous shots at locations where it would be inconvenient to bring the entire company during a normal day of shooting. “Pre-shoot” or “test” days require a smaller crew and keep the cost for the shooting day down.

Clark added: “I can’t imagine telling people, ‘OK we’re going onto the tracks, and if you hear a whistle, you have a minute.’ That’s preposterous. Accidents happen, but stupidity? You say, ‘That’s not acceptable. Can we find another bridge?  Can we find an inactive track that we can pull the weeds out of?’ There are solutions if you just think about them.