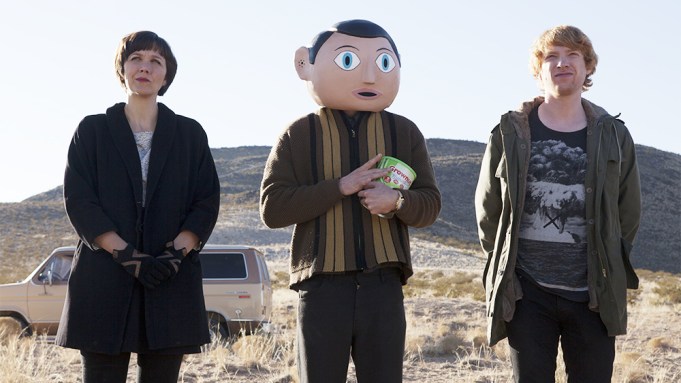 The newly-released U.S. trailer for the Sundance hit “Frank” is as bizarre as one would expect for an oddball comedy about a musician who wears a papier mache head.

Michael Fassbender hides behind a giant fake head for the entirety of the film. However, his character Frank does have the decency to say his facial expressions out loud: “welcoming smile,” “wear a grin,” “bashful half smile.” Well, until his deadpan sidekick (played by Maggie Gyllenhaal) tells him he’s being annoying.

Lenny Abrahamson’s quirky comedy, which premiered at the Sundance Film Festival earlier this year, follows a wannabe musician (Domhnall Gleeson) who joins an eccentric band, led by Frank, and encourages them to perform at the SXSW music festival. Frank’s rationale of creating music solely for the joy of it is called into question.

“‘Frank’s’ insights into human nature extend beyond the sphere of music, finding yet another fresh angle on the ‘Being There’ fable, in which a mentally unsound man is mistaken by his peers as a prophetic figure,” Peter Debruge wrote in his review.

The movie hits theaters on August 15.