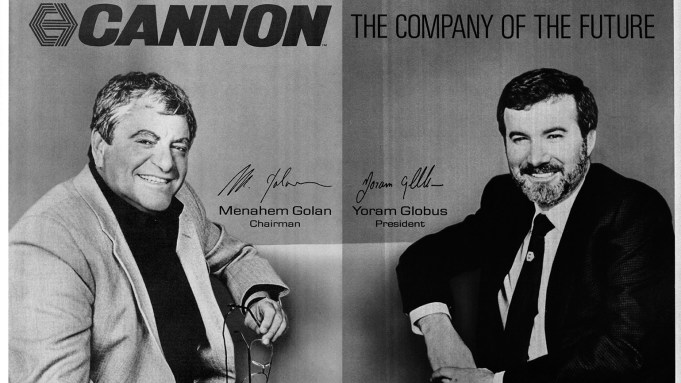 Menahem Golan, the colorful, free-spending Israeli-born producer and director whose Cannon Films yielded hundreds of productions starring the likes of Sylvester Stallone and Chuck Norris before going bust, died Friday in Israel, according to Haaretz. He was 85.

Golan, whose first name is sometimes spelled Menahem, was famous for his overblown pronouncements and business plans. He and his cousin, Yoram Globus, his partner for many years, started their U.S. career making fast-paced action exploitation titles starring Norris and Charles Bronson, among others. Then, in the ’80s, Golan and Globus headed the ill-fated public company Cannon Entertainment, which began spending more on films such as “A Cry in the Dark,” “Cobra,” “Sahara” (1983), “Over the Top” and “Bolero” with a wide range of actors including Stallone, Brooke Shields, Meryl Streep and Bo Derek.

For a decade Golan dominated the market portion of the Cannes Film Festival, booking hundreds of pages a day in trade papers and hoping to win acclaim for his films. In his 1987 book “Two Weeks in the Midday Sun,” Roger Ebert wrote, “Cannon’s historical failure to win the Palme d’Or was not through a lack of effort. The company has always been cheerfully schizo, announcing its art films with the same gusto it uses for its exploitation product.”

By increasing the pics’ budgets, they also increased their risk, and met a fate similar to that of other international concerns such as Andrew Vajna and Mario Kassar’s Carolco, which tried to crash mainstream Hollywood only to crash and burn.

After returning to Israel with creditors right behind him, Golan turned to the stage, producing Israeli versions of popular musicals like “The Sound of Music,” though he was not above seizing on an event like the murder of Italian designer Gianni Versace and quickly cranking out an exploitation film about it.
Shelley Winters, who worked on several Cannon Films, was said to have once compared the cousins to the old Hollywood moguls: “They’re like the old-style bastards. We hated them, but they loved films.”

After creating Noah Films, Golan began his own film directing career in 1963 with the Israeli film “El Dorado.” After producing the Oscar-nominated “Sallah Shabati” in 1964, he directed “Trunk to Cairo” and “Tevye and His Seven Daughters,” as well as several other films. His productions of “I Love You Rosa” and “The House on Chelouche Street” were also international critical successes. Globus joined Golan during this period, serving as the money man while his cousin was the promoter and creative force. They branched out into more international fare such as the gangster pic “Lepke,” the actioner “Operation Thunderbolt,” “Enter the Ninja,” “The Delta Force” and even artsier films like “Hanna’s War” and “Mack the Knife,” based on the Kurt Weill musical.

Golan-Globus Prods. specialized in low-budget films as well as multinational productions through Ameri-Euro Pictures. The pair spent $5 million and under, occasionally hitting paydirt with films including “The Happy Hooker.” But more often the films were low-budget action pics such as “Operation Thunderbolt,” about the Israeli raid to free hostages held by Palestinian terrorists at Entebbe Airport in Uganda.

Via a number of moneymakers such as “The Happy Hooker” (1979), “Texas Chainsaw Massacre II,” “Lemon Popsicle” and its sequels and, later, “Death Wish II,” which cost $15 million and grossed more than $40 million, Golan and Globus bought Cannon Films in 1979. Slowly they became more ambitious, producing a film version of the hit Broadway drama “That Championship Season” (which was not a success) and star-driven projects like “The Wicked Lady,” with Faye Dunaway, in 1983 and “Runaway Train,” starring Jon Voight, in 1985.

Covering costs by selling off foreign territories, often based on just a poster before the films were shot, the Cannon Group went public, issuing a stock offering of $25 million. Golan, as chairman, and Globus, as president, went on a spending spree, paying for high-priced talent like Sylvester Stallone ($12 million for “Over the Top”) and Meryl Streep (“A Cry in the Dark”); artsy types like Barbet Schroeder (“Bar Fly”), John Cassavetes (“Love Streams”), Jean Luc Godard (“King Lear”) and Robert Altman (“Fool for Love”); and blockbuster-style projects like “Superman IV.” They also bought properties such as a chain of Midwestern theaters (Cannon already owned theaters in England and Holland) and Britain’s Thorn EMI and Elstree Studios.

Too often, the projects were foolhardy, such as the desert epic “Sahara,” starring Brooke Shields, or “Bolero,” with Bo Derek. The bubble burst in the late ’80s, and by 1987 the company was reporting a $98 million loss, with the SEC suspecting much book-cooking in the process. The stock plummeted from a high of $45 to $5, and a white knight was needed to continue. That man turned out to be the infamous Giancarlo Parretti, whose Pathe Communications bought 39% of the company. Shortly thereafter Golan and Globus split, and Golan left Cannon. It became part of the entire Credit Lyonnais imbroglio after the shifty Parretti bought MGM/UA, and the French bank eventually assumed all his properties.

Golan’s new company, 21st Century Pictures, formed in 1989, went belly up soon after, as did his subsequent banner, International Dynamic Pictures. The latter company was seized by creditors who also took over Golan’s home in Los Angeles.

Golan was born in Tiberias, Israel (then Palestine). He changed his last name from Globus during the 1948 War of Independence, when Israelis were encouraged to take Hebrew names. After serving in the Israeli Air Force, Golan began a career in the theater. He was an apprentice at the Habimah Theater in Tel Aviv and studied directing at the Old Vic School in London as well as the London Academy of Music and Drama. Returning home, he directed a number of theater productions and then became interested in Israel’s burgeoning film industry. He moved to New York to study filmmaking at NYU and then worked as an apprentice to Roger Corman, whose quickie, low-budget productions would serve as his filmmaking template.

After the seizures of his American assets, he moved back to Israel, where he continued his ways, producing theater (and getting into trouble with the Rodgers and Hammerstein organization for recording a stage production of “The Sound of Music” without its permission), and grabbing any opportunity to make a fast buck on an exploitation film. There was even a kind of rapprochement with his cousin, Globus.

His 1990s directing efforts included “Hit the Dutchman,” “Deadly Heroes,” “Superbrain,” “Russian Roulette — Moscow 95” and “The Versace Murder” (1998); in 2002 he helmed an adaptation of Dostoevsky’s “Crime and Punishment” that starred Crispin Glover, Vanessa Redgrave, John Hurt and Theodore Bikel but was never released in this country.

He made his final exploitation pic, “Final Combat,” in 2003 and spent the rest of the decade directing poorly reviews Israeli films even as that industry was coming into its own.

In November 2010 the Film Society of Lincoln Center held a retrospective called “The Cannon Films Canon,” attended by both Golan and Globus.

He is survived by a wife and three children.