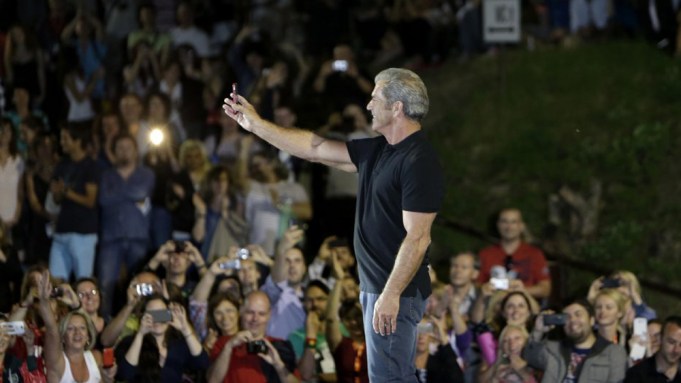 Mel Gibson was at the Karlovy Vary Intl. Film Festival Friday to receive the Crystal Globe for outstanding artistic contribution to world cinema. He also went on stage before an open-air screening of “Mad Max,” attended by more than 3,000 screaming fans. (Watch his cell-phone video clip from the night, above). Variety spoke to him there about Hollywood, independent filmmaking, sharks, Vikings… and Gary Oldman.

Do you find it more challenging nowadays in the public eye with everyone having a camera or something that can record?

Of course. It’s not like it used to be. You have to presume that everything you say and do is recorded, and I do.

What piece of advice would you give young filmmakers and actors starting out in Karlovy Vary that would allow them to have not just a long career, but also a satisfying one?

A lot of people used to try… this happens with actors and directors… They come to Los Angeles, and they believe it to be this kind of Mecca of filmmaking, and I think it used to be, but I don’t think it is anymore.

I think it’s wherever the inspiration is. It’s wherever it’s going to… it’s a homegrown thing. You got a better chance of making a world-breaking phenomenal story here in Karlovy if you are local and you understand it than you will have travelling to the West Coast of America. Nothing much is happening there now.

You’ve just made “Blood Father” by the French director Jean-Francois Richet, produced by Paris-based company Why Not Productions, and backed by French film company Wild Bunch? Is it refreshing to work outside the Hollywood system with international companies and filmmakers?

It’s fun. I like it and their enthusiasm. And they are very frugal because they have to be, because they haven’t got that Hollywood backing; they don’t have that support. So they have to be able to go in like robber’s dogs and extract a piece of gold somehow with minimal effort… not minimal effort, believe me there’s a lot of hard work involved, but they have to be able to do it quick, is what I’m saying, and I like that. And of course I’ve worked like that before anyway on big productions which I’ve financed myself like “The Passion” and “Apocalypto.” These are independent productions. So it is kind of fun to have that sort of freedom.

You have a stake in the production company Icon Productions. Do you still like to invest in other people’s films?

It’s not like it was. It’s scaled down a bit. We used to have branches everywhere… in Europe and… It’s downsized a great deal so it’s not as prolific as it once was but it’s not dead either. I’ve still got Icon, and if I see something that is really cool and worthwhile doing, and cost effective…

Like the other independents, I’m not in there to get burned. But it’s becoming more difficult, put it that way, for everybody.

What is it that makes it difficult for you?

It’s just the way things are. There’s been a big shift in the way things used to be. I mean, there aren’t as many films being done at the studios, and they tend to gravitate toward the big blockbustery things with pyrotechnics and stuff like that, which is valid. They are entertaining.

I think stories of more substance are not as sought-after or fostered as much. And of course those things are left largely to the independent filmmakers. For the independent filmmakers, traditionally, it’s been more difficult to get distribution, and to get back what you put in. It’s just more difficult. And there are a lot of gatekeepers along the way.

It’s like anything. There are a lot more hurdles to overcome. You are going to get robbed and raped and beaten. It’s just part of the game. There are a lot of sharks in the water. But even something that you finance yourself, and it’s independent, and you go out and you make deals with the distributor, or you are the distributor and you make deals with the exhibitor, and all this kind of stuff. Even then, at the end of the day, you feel like “The Old Man and the Sea” with Ernest Hemingway, where he catches a big fish and by the time he gets it into shore it’s just a head, because all the sharks were in there biting the hell out of it.

It’s the way it is, man. And you’re lucky if you can make a living at it.

Yes, you can trace your genes… they’ve done those tests…

Yeah, you can, and I’ve done that too. I’m definitely from that area, so I had some great ancestor named Bjorn who was probably coming to your town and making a monster of himself.

They got all the way down to Ukraine, it’s a huge distance…

Oh yeah. They went to North Africa. They got everywhere. They were all through Russia, all through Finland…

Going back to the issue of being in the public eye, do you have any sympathy for Gary Oldman, and the predicament he was in recently?

What was that? How did that come about?

It started with an interview in Playboy, certain sentences were pulled out, and he apologized…

These things happen. As we all know… I have nothing much to say. The guy was probably just… He’s a good guy.

He’s a great actor. I’ve not met him…

He’s fantastic. I know him. He’s a good dude… I didn’t even look too hard.

Have you had a good time in Karlovy Vary?

It’s great, so far. I mean it is very hot-house, I mean it’s a green-house. I have hardly been out of this hotel. But the town looks nice from the window.

I can never see a place the way you can, but it leaves a lot to my imagination, which is sometimes better.