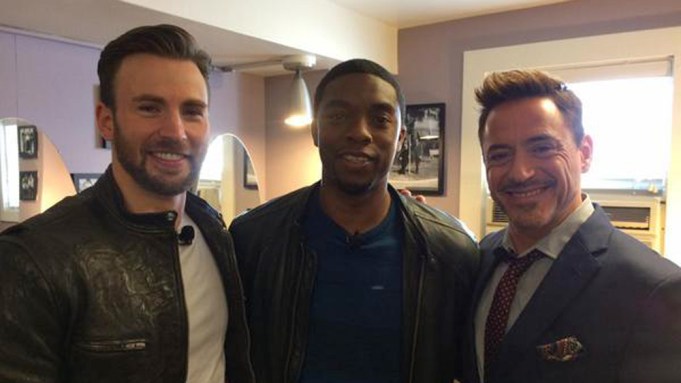 In filling out its release schedule through 2019, Marvel Studios has laid out the company’s cinematic plans that involves sequels to “Captain America,” “Thor,” “Guardians of the Galaxy,” and “The Avengers,” but potential new franchises with “Doctor Strange,” “Black Panther,” “Captain Marvel” and “Inhumans.”

But after producing 10 back-to-back hits — “Guardians of the Galaxy” was its tenth, earning $753 million — Marvel’s brass said the company was “comfortable” to go big for what’s considered the third phase of its film slate.

The $7.1 billion that its films have earned to date, “gave us the confidence” to launch new films around characters that had not yet been introduced on the big screen, Feige said after a Marvel Studios fan and press event on Tuesday at Disney’s El Capitan Theater.

All ten of the films produced by Marvel Studios have opened No. 1 at the box office, beginning with Marvel’s “Iron Man” in 2008, through August’s “Guardians of the Galaxy.” Seven have surpassed $500 million at the global box office, with all five released by Disney passing the $600 million mark (Paramount released the previous five).”The Avengers” and “Iron Man 3,” the first two Marvel films marketed and distributed by Disney, also set records as the two biggest domestic openings of all time with $207.4 million and $174.1 million, respectively. “Captain America: The Winter Soldier,” and “Guardians” became the biggest debuts and biggest releases of April and August, respectively, at the domestic box office.

“The studio is firing on all cylinders,” he said. “It made us comfortable for the first time to increase to three films a year without changing our methods at all.”

Marvel will start off its three-pic years in 2017, with “Guardians of the Galaxy 2,” on May 5, a new date for that superhero sequel, which James Gunn will return to direct.

Phase three has grown to nine movies, including the third “Avengers,” which will be broken up into two parts, beginning in 2018, and wrapping up in 2019.