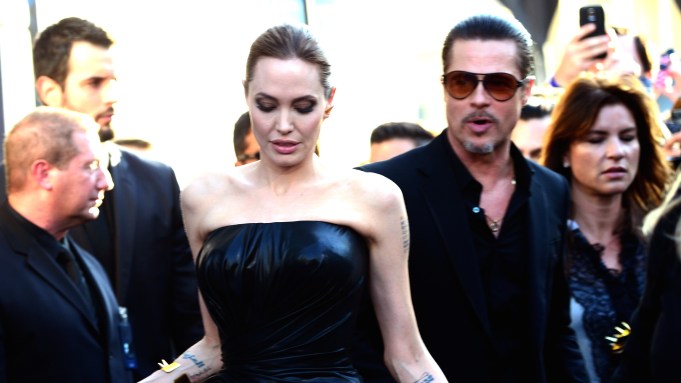 Witnesses saw the individual, later identified as celeb prankster Vitalii Sediuk, jump the security barriers while Pitt and Jolie were signing autographs in front of the El Capitan Theatre in Hollywood. The man then approached Pitt on the red carpet, where he allegedly struck the 50 year-old actor in the face.

Security guards held Sediuk, 25, until the LAPD could take him into custody, which you can see in the paparazzi video below. LAPD Sgt. Leonard Calderon said he was taken to the Hollywood police station where Sediuk was arrested and booked on suspicion of misdemeanor battery.

Pitt, who was unharmed according to law enforcement officials, resumed signing autographs for fans after the incident.

“This was an unfortunate and inappropriate incident that is being investigated by the LAPD,” a spokesperson for Disney, the distributor of “Maleficent,” told Variety.

Ukranian TV presenter Sediuk was last spotted just 11 days ago in Cannes with his head under America Ferrera’s dress. The notorious prankster crashed the Grammys last year, when he was jailed overnight and banned from setting foot in the L.A. Live complex after making it up on stage and attempting to accept Adele’s award for best solo performance. He has also grabbed Leonardo DiCaprio (watch the video below), tried to kiss Will Smith (and was subsequently slapped) and groped Bradley Cooper at various red carpet events.