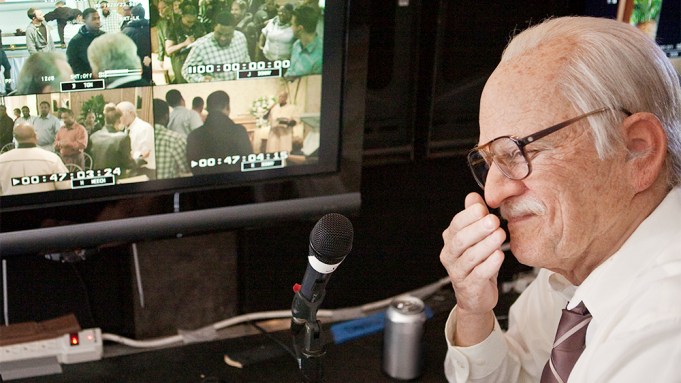 Variety landed quite a coup when we got to sit down with the star of one of the biggest films from 2013, Irving Zisman.

If the name doesn’t ring a bell, Zisman is the title character in “Jackass Presents: Bad Grandpa,” the 86-year-old widower who embarks on a road trip from Nebraska to South Carolina with his 8-year-old grandson Billy. He’s not so much portrayed as embodied by Johnny Knoxville, who spent three to five hours in the makeup chair every day to become the foul-mouthed, girl-chasing geriatric.

The results earned lead makeup artist Stephen Prouty an Oscar nomination, and Prouty was on hand last week to transform Knoxville into Irving once again and discuss the difficulty of shooting the hidden camera hit. “I worried most about being out in the daylight,” Prouty revealed. “We were sending Johnny out to be opposite real people every day. And if they didn’t buy it, the entire movie doesn’t work. You don’t get a second take.”

Prouty, whose credits include “Thor” and “Men in Black 3,” said Knoxville was extremely patient sitting in the makeup chair, and he could actually see him transform not just physically but emotionally into Irving during that time. “Johnny takes his comedy very seriously,” Prouty noted.

As for Irving, he seemed pleased to be greeted by a female interviewer, and wasted no time offering tips for the upcoming Valentine’s Day.