Joe Manganiello on ‘La Bare’: ‘There’s No Such Thing as Male Objectification’ 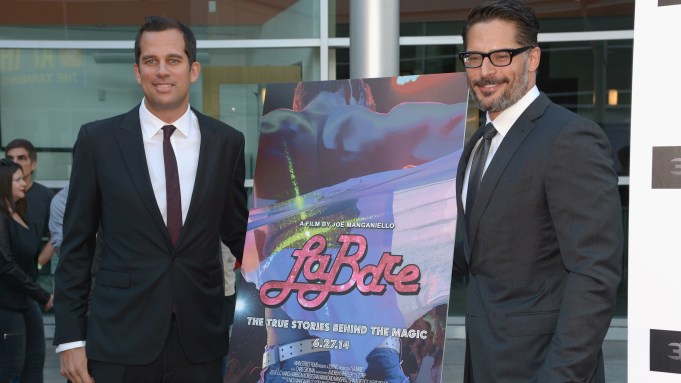 Joe Manganiello went from playing Big Dick Richie in 2012’s “Magic Mike” to directing “La Bare,” a documentary about a group of male strippers in Dallas. This might sound like the setup for a joke, but Manganiello is serious. A classically trained actor who studied Shakespeare and Ibsen at Carnegie Mellon University, Manganiello got his big break as the shirtless werewolf on HBO’s “True Blood.” He’s always harbored directing ambitions, and when he stumbled on the Texas strip club while researching “Magic Mike,” he started to think about making his own film. Manganiello financed the documentary himself (the budget was in the six figures), and shot it in eight days with the help of his brother Nick.

“La Bare,” which premiered at Slamdance Film Festival last winter (and opens today), is like an unscripted “Magic Mike,” offering a behind-the-scenes look at the the world of male stripping. One of the dancers even goes by the stage name “Channing.” Manganiello spoke to Variety about the economics — and risks — of the project.

You originally conceived of “La Bare” as a reality show?
That’s where we set our expectations. We thought we’d at least get a “Jersey Shore” or a “Gigolos” with much more likable characters. We were in the process of signing a deal with a production company, when I showed a 15-minute sizzle reel to Steven Soderbergh and Elvis Mitchell. And both of them said, “Do not give this to anyone. This is a gold mine.”

So it became a documentary.
Actually, there are still interested parties in a TV show. Chances are likely we may be able to make an announcement.

How did you find the club?
There was a good friend of mine who worked there in the ’90s. He originated the fireman routine. When I got the script to “Magic Mike,” I took him out to lunch, and just laughed hysterically for about two hours straight on these wild stories that to me were a cross between Motley Crue and WWE wrestling. I had a lot of misconceptions about male stripping.

What were they?
I’m a guy. I’ve never been interested or curious about that. First of all, I thought male stripping wasn’t something that females were really interested in, and what I found is the complete opposite. This is the greatest job a young man in his late teens or 20s could have. These guys are rock stars.

If only you’d known.
I did find myself directing the film, saying, “Man I really missed out.”

How long did you shoot?
Eight days. We could have edited three movies out of all the footage.

Did you ask all the questions yourself?
Yes, that was me. A lot of those questions were raised through working on “Magic Mike.” The movie revolves around this post-feminist talk of sex relations in this post-feminist world. We’ve done a lot to make men and women equal in the workplace, which is absolutely right. But we are wired differently. And no matter what we do, we are different. The arc of the film is really the difference between male and female fantasies and how they manifest themselves. As it’s so eloquently put in the film, men just want to see naked women, where women want a show. They want to be pre-heated the way an oven is, where a man is just a microwave that turns on and off. The thing I love about the movie so much, once you get out, you and your friends are talking endlessly. I think that it’s 40 years into feminism and now is the time to start having that conversation.

But the dancers also make derogatory comments backstage about their clients. Don’t you think they come across as sexist?
Um, everybody is different. Certainly we’ve screened it a few times in front of big audiences, and the women are screaming and laughing just as loud as the guys in those moments.

Did you finance the movie yourself?
I wrote every single check.

Was it expensive?
A six-figure budget is still, no matter how you cut it, coming from somebody’s pocket. But we signed on with a distributor, and I got out of the red immediately.

Had the dancers in the film seen “Magic Mike?”
All of them. They had a 20-foot banner of “Magic Mike” in the club. It really helped me out as a filmmaker. I don’t know if anybody else directing the film would have gotten the answers out of the guys.

Did you keep any props from “Magic Mike”?
I should have kept my gold thong and my penis pump, but I didn’t. When we get back into the sequel, I’m going to hunt those down for my office.

Is directing something you’d always been interested in?
Directing is something I’ve done since high school. It’s actually how I got into acting. My high school had a fully functioning TV studio with teleprompters and cameras that I would take home with me on the weekends, and I would sleep with a pad and a pen next to my bed. And then I wound up going to Carnegie Mellon to study classical theater.

Did you make movies in college?
I made a satire of “Die Hard,” which had Carnegie Mellon taken over by Chechen terrorists. I played the head of the terrorists.

Will you direct another movie?
Yeah, I’m actually developing a script with Gloria Calderon Kellett. She was a writer and producer on “How I Met Your Mother.” She’s writing this fantastic script for me to take back to Pittsburgh and direct. She writes comedy with a lot of heart, so it’ll be something along those lines. It’s for me to act in as well. I have plans to direct forever.

You seem to have serious ambitions. Do you ever feel like you’ve been put in a box?
I don’t at all. I think it’s hilarious I started my career being trained for Chekov and Ibsen, and I make my living now as the shirtless werewolf in “True Blood” and Big Dick Richie. People ask me, “Are you angry being objectified in the way that you are?” My answer is, “There’s no such thing as male objectification.” It led to my directing career, my producing career and my production company. If I would have stopped at being the shirtless guy, that probably would have bothered me. But I have freedom because of it.