Jessica Chastain and Mark Ruffalo on Rehearsing, ‘Interstellar’ and ‘Foxcatcher’ 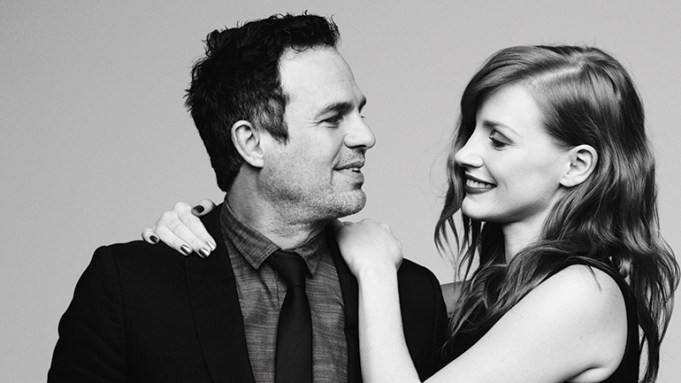 Two of today’s busiest film stars, Jessica Chastain and Mark Ruffalo share a background in — and passion for — theater, and speak about the power of rehearsing as a jumping-off point for improvisation. Chastain has appeared in three movies this year, while Ruffalo can be seen as wrestler Dave Schultz in “Foxcatcher.”

Ruffalo: So I would assume that you’re an actor who doesn’t mind a proper rehearsal.

Chastain: Yes, I love it.

Ruffalo: And do you think that comes from your training? Being onstage?

Chastain: Definitely, but I have been in situations where they say, “Yes, we need you for a week of rehearsal before,” and then you just end up sitting in your hotel room for a week.

Ruffalo: So do you find that the art of rehearsing been lost? I mean I feel like a lot of people don’t know how to rehearse.

Chastain: Well to me, it always depends on the actor. Because sometimes it’s great when the first time you say the lines with the other person is caught on camera. For me, rehearsal isn’t about going over the scene over and over again; it’s about going through the script as who I am — not as the character — and saying, what does this line mean and how long have we known each other? … Fleshing out as much as you can that’s not on the page, and building the relationship with the other actor.

Ruffalo: So do you feel more free because of that? Did you improvise a little bit?

Chastain: Actually, (with) Christopher Nolan for “Interstellar,” I was shocked, because I thought he wouldn’t want improvisation. But one of the very first days, I had these speeches to do, and Chris said to me, “OK, why don’t you just put it in your own words now?” The more you rehearse and know your character — even if you’re rehearsing on your own — the easier it is to improvise. Did you guys improvise?

Ruffalo: Yeah, we would start on the script, and then break free, and it wouldn’t be much, maybe a little exercise that then (we) would refine. (Director Bennett Miller) would say, “I really like that. Let’s take that piece of improvisation, do it again, see where we go if we add this (other) element.” So we were building. And then he’d strip out all the dialogue, and it would be a physicalization — you know, hold that moment, don’t feel compelled to say anything, but let that improvisation inform what’s happening between the two of you. And sometimes in those improvisations, there would be a long silence, or there would be some physical thing that came out of the improvisation that would be the whole scene.