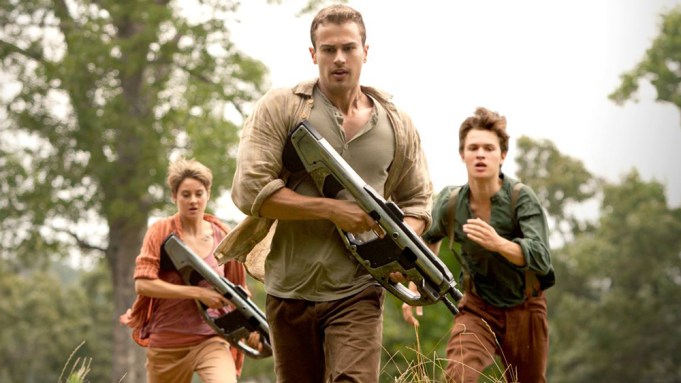 Lionsgate’s Summit label has released a new action-laden trailer for “The Divergent Series: Insurgent,” three months ahead of its March 20 release.

Shailene Woodley totes several weapons in the two-minute trailer while co-star Theo James narrowly avoids a speeding train. The duo reprise their roles amid the ruins of a futuristic Chicago as fugitives on the run, hunted by the power-hungry Erudite elite, led by a chilly Kate Winslet.

Woodley’s Tris is also trying to save her mother (Ashley Judd) by jumping off of several destroyed buildings. And she also has to fight a simulated version of herself.

“What sets her apart will set the world free,” the trailer promises.

The second installment of the “Divergent” series is being released in both 3D and 2D. “Divergent,” which was not released in 3D, grossed nearly $300 million worldwide.

The series is based on the YA trilogy by Veronica Roth. The third and fourth films in the series, “Allegiant” parts one and two, will be released in March 2016 and March 2017, respectively.