‘How to Train Your Dragon 2’ Sends DreamWorks Animation Stock Down 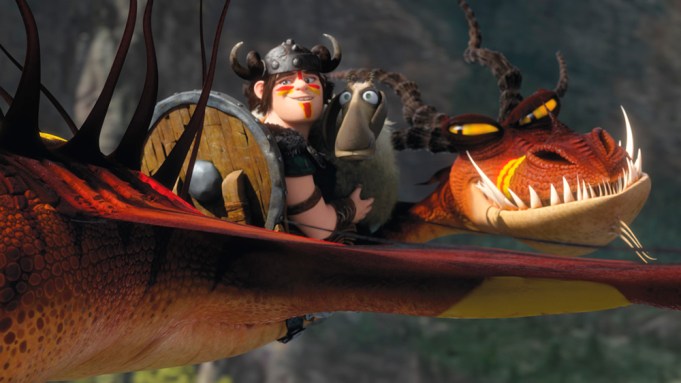 “How to Train Your Dragon 2” didn’t prove to be enough of a box office fire-breather for Wall Street, sending the share price of DreamWorks Animation sliding more than 12% on Monday.

The animated sequel opened to $50 million domestically and picked up in an additional $24.8 million from 26 international territories. However, going into the weekend some analysts had predicted that the film would open to north of $60 million. The company’s stock was down more than $3 on Monday morning, trading at $23.94.

While DreamWorks Animation has made steps to branch out into different areas of the media business, buying YouTube powerhouse AwesomenessTV and signing deals with Netflix for instance, the frosty reception from investors demonstrates its fortunes remain inexorably tied to the theatrical performance of a handful of films.

“The stock is definitely going to being volatile to opening weekends given that they only have three movies per year and they’re not diversified enough with TV and other things to help offset weaker openings,” said Eric Wold, an analyst with B. Riley and Co.

Part of the disappointment is that three of the studio’s most recent four films — “Rise of the Guardians,” “Turbo” and “Mr. Peabody and Sherman” — have resulted in write-downs and the “Dragon” sequel was seen as a Tiffany franchise for the studio. Moreover, the summer has been devoid of animated offerings, all of which seemed to signal a huge opening for the film.

Reviews for the sequel were strong, but “22 Jump Street” proved to be a $60 million smash, which likely ate into its box office take. Parents who may have been inclined to take their kids to see “How to Train Your Dragon 2,” could have been convinced to hire a sitter and check out the R-rated comedy instead.

“Where it finishes is more important than where it starts,” said Marla Backer, an analyst with Ascendiant Capital Markets.  “It’s a disappointing debut, but does it signal the film will fall short? I’m not sure.”

A spokeswoman for DreamWorks Animation did not immediately respond to a request for comment. However, it should be noted that the studio’s stock took a tumble following the 2011 openings of the first “How to Train Your Dragon” and “Kung Fu Panda 2,” both of which turned into hits.

Moreover, the studio’s films tend to have legs at the box office. Unlike most major tentpole releases, the pictures are not front-loaded. The first “How to Train Your Dragon” did five times its opening weekend over the course of its domestic run, and there are still several major foreign markets left to open such as China, Brazil and Mexico. The international reception could prove more critically important than the stateside one.

“The opening weekend domestic box office, in terms of framing the final global box office, is not what it used to be in terms of importance,” argued Ben Mogil, an analyst with Stifel Nicolaus, in a note to investors.

The film also has a nice runway, given that the next animated film to open, “Planes: Fire & Rescue,” doesn’t land in theaters until July 18. That presents an opportunity to make up lost ground.

For now, Wall Street is watching to see if DreamWorks Animation can turn a sprint into a marathon.