How Chevy’s Camaro Changed With the ‘Transformers’ Franchise 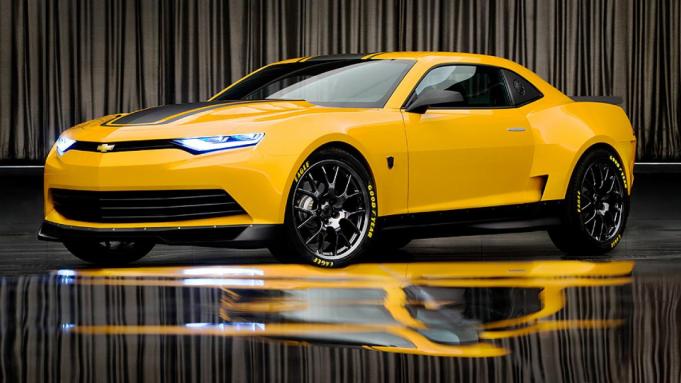 The “Transformers” franchise has become just as much about the cars as they are about the shape-shifting robots. And no one has benefitted more from the exposure of their vehicles in the films than General Motors, with Chevrolet’s Camaro enjoying a sales boost since the series hit the big screen in 2007.

“Being a part of the ‘Transformers’ franchise is an incredible way to showcase the design work of which GM is capable,” said Ed Welburn, VP of GM Global Design. “The global series gets our cutting-edge designs in front of more potential customers than we could through traditional methods.”

SEE ALSO: Business of a Prop: Bumblebee’s Camaro in ‘Transformers’

A yellow version of the American muscle car, which was redesigned around the release of the first “Transformers,” plays Bumblebee in the movies (he was first introduced by toymaker Hasbro as a Volkswagen Beetle).

And Chevy has run with the popularity of the film franchise, offering director Michael Bay (who has long directed the automaker’s commercials and Super Bowl spots) a new version of the Camaro to show off with each sequel and further cement its place as a pop culture icon and compete against rivals like Ford with its Mustang.

“In all the ‘Transformers’ films, Chevrolet vehicles get to play the heroes,” said Tim Mahoney, chief marketing officer, global Chevrolet. “These movies have helped us get our vehicles in front of a younger audience around the world.”

Here’s a look at the many faces of Bumblebee as a Camaro and the impact on GM’s bottom line:

Through Bay’s close relationship with GM, the director was able to talk the carmaker into letting him cast a concept version of the company’s fifth-generation Camaro as Bumblebee — a vehicle that wasn’t going to actually roll into dealerships until two years later.

But to pay homage to the original Camaro, Bumblebee starts off in the film as a beat up 1977 second-generation Camaro. While still yellow, it’s covered in rust and dings.

For the film, GM and Bay’s team of vehicle designers used body panels made from the molds of the 2006 Camaro concept car that traveled the auto show circuit the year before and outfitted them on a Holden Monaro.

After the film went on to earn nearly $710 million worldwide and launch a new franchise for both Paramount and Hasbro, GM also saw interest in the Camaro skyrocket — it wouldn’t be able to cash in on the interest until 2009.

The second “Transformers” movie bowed only a few months after the new Camaro went on sale with the hero car on screen represented by a slightly modified version of the production car in dealerships. The one in the film featured Bumblebee’s signature black rally stripes on the hood and trunk, a mailslot hood and custom front bumper.

Interest in the car was seen not only in theaters and in the toy aisle, where the Camaro was available as more than 150 different types of toys, but also in dealerships. GM saw a 10% gain in sales for yellow Camaros. The color typically accounts for less than 5% of any model’s sales. It also sold 60,000 Camaros in 2009, and would sell 80,000 in 2010, many of which were attributed to the “Transformers” films. The vehicle is also prominently featured in Universal’s “Transformers” theme park attractions, which Bay also helped develop.

In “Dark of the Moon,” Bay upgraded Bumblebee to the SS model. The car’s yellow color was also updated to give it a more amber hue rather than the previous model’s pure yellow. The final vehicle also featured wider rally stripes, black side mirrors and darker wheels.

For the fourth film, out June 27, Bay asked GM’s design team to update Bumblebee’s look in order to make the character appear more aggressive and muscular (see the video above). GM’s North Hollywood Design Center wound up altering the entire front end and narrowed the grill and headlights while bulking up the sides of the car which wound up making the vehicle appear more modern than the one on the road today.

Earlier in the film, Bumblebee is portrayed by a 1967 Camaro SS.

The film also features plenty of product placement from GM’s Cadillac brand, as well as a green Corvette Stingray (which plays Crosshairs) and Chevy Sonic rally car as hero vehicles. The Chevy Trax also is prominently featured, since it recently went on sale in China, a major location in the film. The small SUV goes on sale in the U.S. early next year.

GM also is featured in other ways in the final film, with the company’s Milford Proving Ground, the GM Design Center in Warren, Mich., and the Lansing, Michigan Delta Township Assembly Plant also serving as locations where “Age of Extinction” was filmed.