Continue to Variety SKIP AD
You will be redirected back to your article in seconds
Aug 1, 2014 7:50am PT 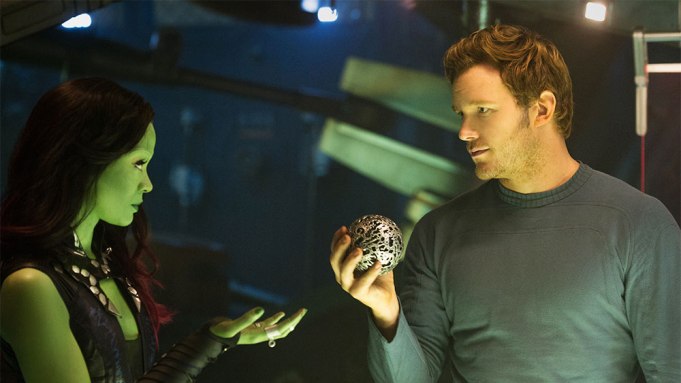 Marvel’s “Guardians of the Galaxy” got off to a rousing start on Thursday, rocketing to $11.2 million in late night preview screenings. That’s the biggest pre-opening total of the year, besting another Marvel title, “Captain America: The Winter Soldier’s” $10.2 million start in April. Roughly $1.9 million of “Guardian’s” initial haul came from Imax screenings.

Despite lacking a top-shelf superhero in the form of Captain America or Thor, the comic book adaptation is on track for the biggest August opening in history, topping “The Bourne Ultimatum’s” $69.3 million bow. It is expected to premiere to north of $75 million, but could soar even higher given that “Captain America: The Winter Soldier” debuted to $95 million this spring and this film is hitting loftier numbers.

The film is a record-breaker in another sense. It will have the widest August opening in history when it expands to 4,080 theaters on Friday, nearly 3,200 of which are in 3D, carrying with them surcharges. Overseas, the film will debut in 42 international territories including the United Kingdom, Russia, Brazil, Mexico and South Korea. The picture carries an $170 million production budget.

Overseas, the film is off to a strong start, racking up $2.3 million in the United Kingdom and Ireland, nabbing $3.5 million in Russia, and generating $1.6 million across several South and Central American countries such as Brazil, Argentina and Uruguay.

James Gunn, a habitué of the indie and horror worlds through such films as “Super” and “Slither,” directs the film about a rag-tag group of space cowboys. Chris Pratt, best known for his comedic turn in “Parks & Recreation,” should enjoy a nice career bounce for his work as the Han Solo-esque, Star Lord. The picture’s mix of laughs and spectacle has been hailed by critics — it currently enjoys a 91% “fresh” rating on Rotten Tomatoes.

The weekend’s other wide release, Universal Pictures’ James Brown biopic, “Get on Up,” grossed an estimated $371,000 when it screened Thursday in 1,769 locations. It is expected to make between $12 million to $14 million when it expands to 2,466 theaters on Friday.

The Guardians and the “Godfather of Soul” will find a summer box office that has been decimated by too many blockbusters that weren’t. Domestically, ticket receipts are down 20% from last year. Exhibitors are clearly holding out for a hero, to paraphrase the great Bonnie Tyler. It looks like one just arrived in the form of a wise-cracking raccoon and a talking tree.