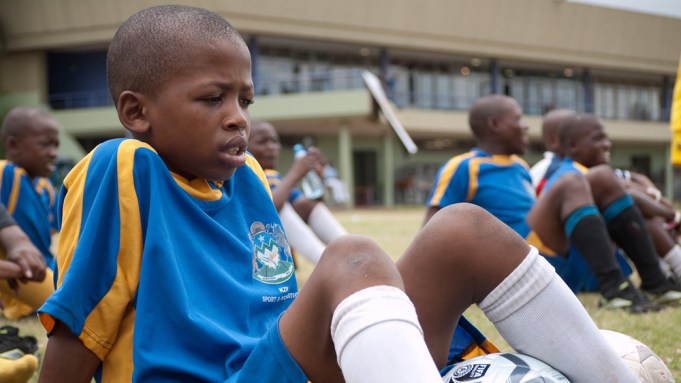 LONDON — Feature documentary “Streetkids United II — The Girls From Rio,” the sequel to the 2011 Berlinale entry, has kicked off lensing in Brazil.

The second film — in what is to become a series — is being produced by the U.K.’s F&ME and the Netherlands’ JaJa Film Prods. to coincide with the second Street Child soccer World Cup, which is being organized in Rio by the AMOS Trust prior to the 2014 FIFA World Cup in Brazil.

“The teams have all arrived in Rio for the opening ceremony, and our crew has been out filming with the Brazilian girls’ team prior to the arrival of the international crews,” explained F&ME’s Mike Downey.

The film will focus on the girls’ soccer tournament, and will follow the Brazilian girls’ team from the Penha favela as they go through the highs and lows of the tournament.

Nine teams of street girls from around the world, aged 14-17, will compete in the first girls-only tournament. Girls are often denied the opportunities to play sport, so the tournament provides the girls with an opportunity to change perceptions and for their stories to be heard.

Celeste, who plays for Team Mozambique in Street Child World Cup, said: “We were excited before we left, but also nervous because this is the first time we’ve left Mozambique. The trip was very tiring but good. We are very happy to be here, and can’t wait to play.”

Two leading international directors are lending their names and expertise to the project as “godparents”: Beeban Kidron, whose Film Club screened “Streetkids United” across its network of schools in the U.K., and Stephen Daldry, who is F&ME’s chairman and is in post-production on his Rio de Janeiro-set film “Trash” with Fernando Mereilles’ O2 outfit, starring Martin Sheen and Rooney Mara.

The director of “Streetkids United II,” Maria Clara Costa, is one of the rising stars of Brazilian cinema. She also serves as editor and producer. Her credits include Spike Lee’s “Summer of Sam” and “Bamboozled,” “Disappearing Acts,” the Academy Award winning “Election,” as well as numerous advertising productions for Saatchi & Saatchi. A native of Rio de Janeiro, she was a first assistant director at age 17 working on various films and television projects in Brazil. She has worked with Fernando Meirelles, the director of “City of God” and his production company O2 Productions.

“Along with Sam, Stephen and myself,” said Downey, “Jamillah is committed to making films that highlight social issues and ‘Streetkids United II — The Girls From Rio’ is the perfect vehicle for her to hone her financing skills both in the Netherlands and internationally. We worked very well together on ‘Lilet Never Happened’ and we want to repeat the experience. She has done a fabulous job in pulling together the finance for the film.”

Van der Hulst has brought on board Martien Witsenburg, founder and CEO of Witsenburg Natural Products. Witsenburg, which was also a partner on “Lilet Never Happened,” has committed to a significant equity investment in the film.

“We support this project because we strongly believe that sport has the power to unite people, inspire people and to achieve sustainable development,” said Piet Vroeg, director of Cordaid’s Child and Education Department. “Sport is very useful to help children learn lifelong skills, to strengthen education systems and to stimulate a child’s development.”

Service producer on the pic is Total Entertainment’s Walkiria Barbosa.

Negotiations are underway to bring on board a sales company.

F&ME is also working on a Brazilian feature documentary “Rio 50 Degrees” by Julien Temple and co-produced by Christopher Pickard, based on an idea by Pickard and Helen Beltrame, for the BBC’s “Imagine” strand in the U.K., and to Metro International, which will handle international sales.

Other F&ME films in production or post production are “The President” by Mohsen Makhmalbaf, “Welcome to Karastan!” by Pawel Pawlikowski and Ben Hopkins, “From Zero to Hero” by Srdjan Dragojevic, “Monument to Michael Jackson” by Darko Lungulov, and “Angels” by Alice Nellis.