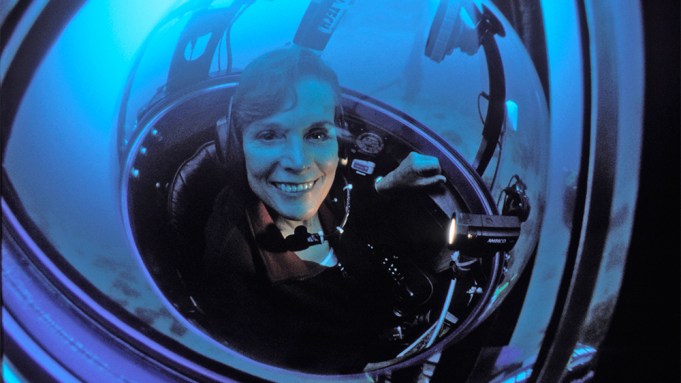 “Do you enjoy breathing?”

It’s a question Dr. Sylvia Earle asks people who wonder why we need to protect the oceans. The legendary marine biologist and National Geographer Explorer-in-Residence has been studying the ocean since the 1950s. Her life and work are now the subject of a new documentary, “Mission Blue,” hitting theaters and Netflix today.

As Earle points out, Earth would not be hospitable for humans if it weren’t for the ocean. “It’s filled with living things that shape the chemistry of Earth,” she says. “It’s where we get most of our oxygen, from small organisms that make up the plankton in the sea. Of course trees and other green things have much to do with generating oxygen and taking up carbon dioxide—but there’s no green without blue.”

Her cause has already earned the endorsement of the likes of Leonardo DiCaprio, who has hosted screenings of the film, and calls Earle “an inspiration,” noting that when they scuba dive together, he has trouble keeping up with the 78-year-old. Upon hearing this, Earle laughs. “I think that’s an exaggeration,” she says. “He does very well underwater.”

Earle met DiCaprio four years ago on a trip to the Galapagos Islands, where she also met actor and filmmaker Fisher Stevens, an Oscar-winning producer on “The Cove.” Stevens and Robert Nixon co-directed “Mission Blue,” which highlights remarkable moments in Earle’s career while also showing how the ocean has changed over the years due to issues like oil spills, overfishing and environmental changes. All the while it services Earle’s mission, to create a network of protected marine sanctuaries she calls “hope spots.”

As a career retrospective, the film is fascinating. When she embarked on a mission in 1964 to study the Indian Ocean, one headline blared: “Sylvia Sails Away with 70 Men, But She Expects No Problem.” As a personal story, it’s equally intriguing—she details the collapse of three marriages and raising children as a working mother who would take off for expeditions across the world. But as a warning call to protect our planet, it’s terrifying.

“We’ve done great damage to the fabric of life, especially in the ocean,” she notes.

Originally, Earle was not going to be the main focus of the film; it was going to concentrate primarily on the hope spots. Over time, the filmmakers realized the way into the story was through Earle, who has witnessed all the changes to the ocean. “I began diving in the 1950s and since then, half the coral reefs are gone or in a steep decline,” she says. “I’ve personally seen how the fish have been depleted over the years. I’ve seen how we’ve gone from having no dead zones in coastal areas to more than 500 today.”

Earle admits seeing her life story play out in the film was strange, to say the least. “Especially because they found things I haven’t seen myself,” she adds, as the film incorporates photos and videos from decades earlier. “Some of those I had forgotten about or don’t think I ever saw!”

The film is not all doom and gloom, however. The message is ultimately one of hope—that if we act now, change can be made. “It’s time for us to use our knowledge and powers to restore and protect these systems,” Earle says. “You don’t come to people’s houses and throw trash on the floor and knock over furniture.”

And the response has been very positive, with many audiences wanting to get involved. “People care. People want to know,” Earle says. “And I want them to go jump in the ocean—in a positive way.”