Disney’s ‘Into the Woods’ Enters Awards Season on High Note 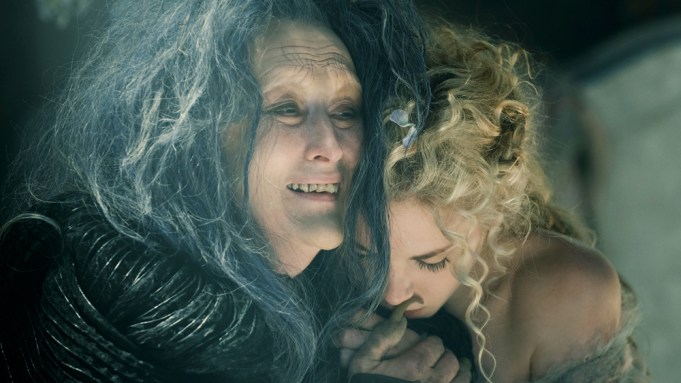 Though “Into the Woods” debuted in 1986, it’s “a fairy tale for the post-9/11 generation,” said director Rob Marshall at a Q&A in New York after a screening of the film Saturday.

The panel session took place at the DGA Theater in New York and was satellite-fed to the Disney main theater in Burbank, a two-birds-with-one-stone approach as the film begins industry screenings for awards contention.

The director and his team of artisans will certainly be under Oscar consideration, as will Meryl Streep (top billed, but in a supporting role) and other performers. Variety will run its review in December; after that, there will be more opportunities to handicap the film’s awards chances in specific categories.

Disney often takes a cautious approach to the awards race, but the studio execs seem gung-ho about this one. The film also marks a subtle shift for the studio. Its “Maleficent” earlier this year and the TV series “Once Upon a Time” (on the Disney-owned ABC) offer an alternative view of fairy tales. “Woods” takes that further and deeper, serving notice that “children’s stories” are not just about the Disney Princess line of merchandise. As Marshall said, the musical is about what happens following “happily ever after.”

The filmmaker said he thought the message of the musical, that no one is alone, was more timely than ever. “Kids today live in a world much more unstable and fragile than when I grew up.”

Streep offered a variation of that, saying kids today have returned to a time when they’re aware of everything. “We lived for a halcyon moment in the ’50s and ’60s,” when kids were protected from harsh reality, but now they see everything and know “the world is full of darkness and joy.” They’re much more aware, but also resilient.

Among others taking part in the Q&A was writer James Lapine, who adapted the script from the stage musical he co-created with Stephen Sondheim. The composer wasn’t there, though Streep read a note from him saying he was “laid low by a virus.” Sondheim talked about the pride he and Lapine feel in the movie, saying “it is notoriously difficult” to adapt stage musicals to the screen, but “the Disney film is a happy exception.” He gave a lot of credit to Marshall, since he is a veteran of both theater and movies.

James Corden got the biggest laughs of the evening, but Streep wasn’t far behind, throwing in a few asides about Sondheim’s word choices as she read his note.

Corden jokingly talked about one of the late-in-the-film plot twists (no spoilers here) and clowned about how difficult it was to reach his water bottle from the directors chairs he was sitting in. But he got serious when paying tribute to Marshall and Streep, who is “meticulous about the work” and takes it seriously, but doesn’t take herself seriously.

Streep said they spent a month rehearsing and recording, and three months of filming, all at Richmond Park. Anna Kendrick added that some of the songs were pre-recorded, while others were done on the set, whichever made sense.

Asked about playing the archetype of the wicked stepmother, Christine Baranski said it was more than just about being mean: Cinderella’s stepmother is obsessed with “status, money and image.” Those things are very timely and she got a big laugh when she used “the K family” as an example, evidently referring to the Kardashians without mentioning names.

The opening 16 minutes introduces all the characters and plot points, and Marshall said he wanted that to move fluidly; helping considerably was the work of the craft team, including costume designer Colleen Atwood, cinematographer Dion Beebe and production designer Dennis Gassner.

Also on the panel were Emily Blunt, Chris Pine and Tracey Ullman. The 45-minute Q&A, which was also streamed live on Yahoo! Movies, included questions from both N.Y. and Burbank and from online viewers.