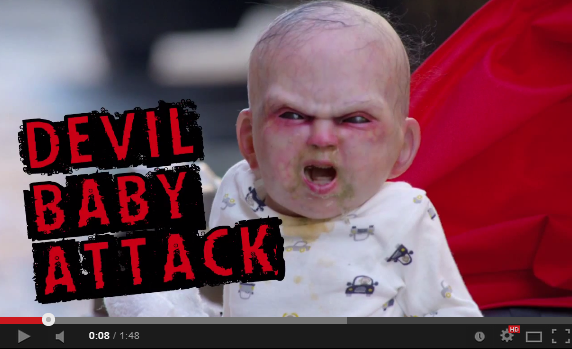 In a twisted new promotion for “Devil’s Due,” a demonic baby in a carriage is sent off in the snowy streets of New York City to scare anyone that approaches the infant.

The prankvertisement, as it’s quickly being called, is the latest stunt by Thinkmodo, the agency behind an equally creepy gag for “Carrie,” which featured a telekinetic girl in a coffee shop. The stunt was viewed by over 53 million people on YouTube. Thinkmodo also worked with Fox on a promo for “Chronicle” that sent people flying into the sky over New York City, and generated considerable press coverage before the film went on to open in the top spot at the box office.

Should the latest baby stunt for “Devil’s Due” generate the same kind of word of mouth, it would mark the latest innovative way to generate buzz among audiences online for a low-budget horror film that doesn’t have the type of marketing budget bigger-pics may rolling out at the box office.

Film, released by 20th Century Fox on Jan. 17, revolves around a newlywed couple who experience an earlier-than-planned pregnancy, with the wife experiencing dark changes to her mind and body of sinister origins.

See the trailer below.