Box Office: ‘The Hobbit’ Rules Them All With $90.6 Million 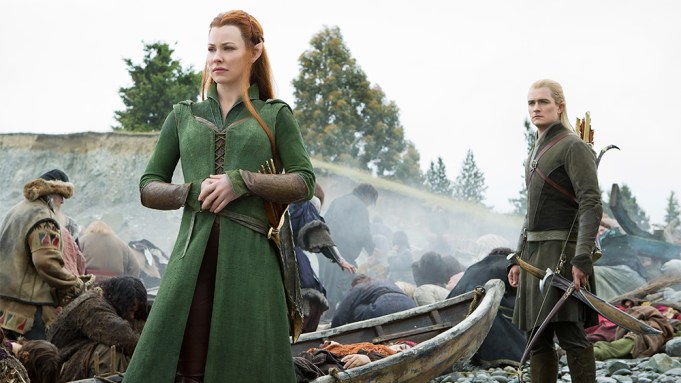 Moviegoers helped Peter Jackson bid farewell to Middle-earth in style, pushing “The Hobbit: The Battle of the Five Armies” to $90.6 million over its first five days in theaters.

The franchise finale debuted Wednesday at 3,875 locations and easily trumped tracking that predicted a debut of about $70 million. For its inaugural three-day weekend, the fantasy adventure earned $56.2 million.

“There have been six visits to Middle-earth, and this is the final one, and it became so important for people to come out to see this in a big way,” said Jeff Goldstein, Warner Bros. distribution executive vice president. “The action was there, and Peter made a fabulous movie.”

This “Hobbit” faced stiffer competition than the previous installments in the form of two major family releases: “Annie” and “Night at the Museum: Secret of the Tomb.” Previous Jackson films, such as “The Hobbit: An Unexpected Journey” and “The Desolation of Smaug,” more or less had their opening weekends to themselves.

Even though there was a number of heavy hitters duking it out at the multiplexes, the overall box office slipped 4% compared to the previous year, a troubling sign that ticket sales are in a slump heading into the holidays. As it stands, the 2014 box office trails 2013’s record breaker by more than 5%.

“It’s not that hard to get out of a slump, but you need time to try to reverse a trend,” said Paul Dergarabedian, senior media analyst at Rentrak. “We’re not going to make up the lost ground. It’s not going to happen.”

Twentieth Century Fox, which backed the $127 million production, will have to hope that families turn out in force over the holidays and that the franchise’s core audience didn’t age out of the series during the five-year gap between sequels.

Fox distribution chief Chris Aronson placed the blame squarely on the box office downturn and suggested the latest “Museum” film will be able to pick up steam as kids get out of school.

“I’m shocked that this weekend is a down weekend,” said Aronson. “We projected that all-industry the weekend would be up. It shows the marketplace is sluggish right now as we get through this last shopping weekend before the holiday.”

“Annie” brought in $16.3 million, a hair above pre-release tracking that projected a debut of $15 million. It’s a welcome bit of good news for Sony Pictures, the studio behind the $65 million production. Sony has been brought to its knees in recent weeks by hackers linked to North Korea, forcing the cancellation of its other big Christmas release, “The Interview.”

“Annie” was originally supposed to debut on Christmas, but Sony moved up its debut in order to generate greater awareness heading into the holiday.

“It was bold to go into this territory with ‘Night at the Museum’ and ‘The Hobbit,’ but there’s something special about ‘Annie,'” said Rory Bruer, Sony Pictures president of worldwide distribution. “We knew the picture itself would be the best marketing tool and we think that the word of mouth is going to spread.”

The musical remake earned an A-minus CinemaScore, and played well with families, who made up 76% of the audience, and females, who comprised 70% of the opening crowd.

“Five Armies” did impressive business, but it could not match the sendoff given to Jackson’s “The Lord of the Rings” wrap-up, “The Return of the King,” which made $124 million in 2003 during its first five days at the box office.

Comparisons with the first two “Hobbit” films are difficult because they opened on Friday while the latest chapter bowed mid-week. “An Unexpected Journey” kicked off with $84.6 million, while “The Desolation of Smaug” debuted to $73.6 million. New Line teamed with MGM to finance the $700 million “Hobbit” trilogy.

The final “Hobbit” did robust business in theaters offering extra bells and whistles, picking up 49% of its gross in 3D screenings, 8% from premium large format screens and 15% from Imax.

“Very clearly this movie looks like it will be the one movie that is going to shine over the holidays,” said Greg Foster, chairman and president of Imax Entertainment. “It feels like it has momentum.”

Globally, the series remains a monster, crossing the $200 million mark worldwide on Saturday. It should end its first weekend with around $300 million in global ticket sales.

Last weekend’s champ, “Exodus: Gods and Kings,” fell sharply in its second frame, plunging more than 65% to $8.1 million — good enough for fourth place on the charts. The $140 million production has made $38.7 million since it debuted. It will have to play better in foreign markets if it wants to recoup its hefty budget.

Reese Witherspoon’s Oscar bait, “Wild,” benefited from a major expansion. The drama about a woman on a walkabout earned $7.2 million after expanding from 116 theaters to 1,061 locations.

Chris Rock’s “Top Five” also expanded, from 979 to 1,307 locations, but its grosses dipped 48.2% to $3.6 million. The well-reviewed film about a comedian in crisis has earned a mediocre $12.5 million since opening last week despite receiving glowing critical reviews.