Continue to Variety SKIP AD
You will be redirected back to your article in seconds
Sep 21, 2014 7:46am PT 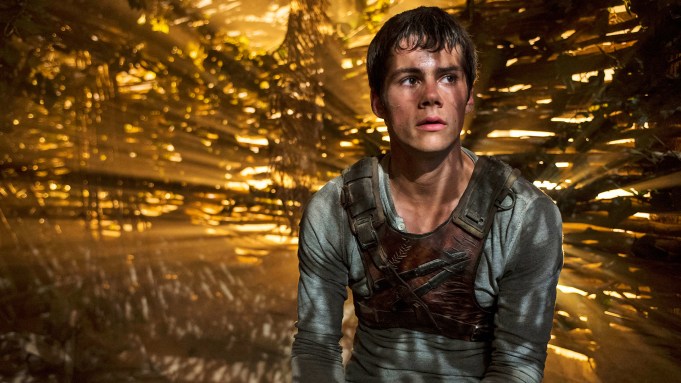 “The Maze Runner” showed that sometimes the weekend box office is a marathon, not a sprint.

Twentieth Century Fox’s adaptation of James Dashner’s post-apocalyptic novel took awhile to build up steam, but found its core audience by the weekend’s midpoint. It debuted to $32.5 million from 3,604 locations, in line with projections. That’s good news for the studio, which hopes to turn the story of a group of teenagers battling nasty creatures in a dangerous labyrinth into a franchise.

“All of the elements came together in accomplishing something that no one ever tried by launching a young adult film like this in September,” said Chris Aronson, Fox’s domestic distribution chief. “We like to stand out whenever we can and we selected this release date in order to be the first event film of the fall.”

The unique opening date allowed “The Maze Runner” to jet ahead of the weekend’s two other wide releases, Universal’s “A Walk Among the Tombstones” and Warner Bros.’ “This Is Where I Leave You,” which racked up $13.1 million on 2,712 screens and $11.9 million on 2,868 screens, respectively.

“Tombstones'” numbers are disappointing given that the thriller had been expected to bring in $18 million this weekend. Despite boasting Liam Neeson’s name above the title, the story of an ex-cop searching for a drug dealer’s kidnapped wife may have been hurt by its dark themes and hard R rating. Neeson’s action hits such as “Non-Stop” and “Taken” have benefited from PG-13 ratings, which widens their potential audience.

Cross Creek backed “Tombstones,” which cost $28 million to produce. The relatively low budget should soften the blow from its lackluster opening.

“This Is Where I Leave You” sees comedy director Shawn Levy (“Night at the Museum”) in a more personal, understated vein. The Shiva dramedy arrived with some impressive star wattage in the form of Tina Fey, Jason Bateman, Adam Driver, Jane Fonda and others and performed on the low end of projections, which had it debuting in the $12 million to $14 million range. The film cost an economical $19 million to make.

Dan Fellman, Warner Bros. domestic distribution head, said the film played well in major cities such as New York City, Chicago and Philadelphia, where ticket sales climbed on Saturday, but didn’t receive as warm a reception in Southern and more rural parts of the country.

“It’s going to have great legs in the cities and that’s where I need it to generate the revenue,” said Fellman. “It’s playing like gangbusters in some parts of the country, and it’s playing a little soft in others.”

“The Maze Runner” saw fans of the book series turn out in force on Saturday, sending grosses for the night up 19% to $13.4 million. Based on Friday mid-day grosses, it briefly looked as though the film might debut in the mid-$20 million range.

Twentieth Century Fox has already set a sequel for “Maze Runner,” set to hit theaters on Sept. 18, 2015, but Dashner’s book is unique in many respects. It sold well, but not at the level of “The Hunger Games” and “Divergent” books — something its opening bore out. The film of “The Hunger Games” debuted to $152.5 million, while “Divergent” kicked off with $54.6 million. Filmed for a mere $34 million, it was produced for a fraction of what those movies cost.

It also avoided the trap of many young adult franchises that weren’t, such as “Beautiful Creatures,” “Ender’s Game” and “I Am Number Four.” Part of the reason may be that its action-heavy plot helped the film bring in teenage boys, a demographic that is often difficult to ensnare. Opening weekend audiences were 49% male and 64% under 25.

“It’s the first YA franchise that has a male protagonist,” Aronson said, noting that the social media savvy O’Brien, “worked his tail off promoting the movie.”

“The Maze Runner” also benefited from showing in souped up theaters. About $3.3 million of the film’s domestic box office was generated by IMAX screens, while $3.4 million was made on premium format screens.

In its second week of release, last week’s champ “No Good Deed” fell 58% to $10.2 million, securing fourth place on the charts and pushing its take to $40.1 million. Another holdover, “Dolphin Tale 2,” dropped a modest 43% in its sophomore frame to $9 million, bringing its total to $27 million.

In its seventh week in theaters, “Guardians of the Galaxy” nabbed sixth place and $5.2 million. Its domestic haul stands at $312 million and its global gross is $624 million, meaning it will eclipse the total gross of “Iron Man 2” ($624 million), despite having less recognizable characters than Tony Stark’s alter ego.

On the art house front, “Tracks” pulled in $21,554 from four locations. The Weinstein Company is backing the story of a woman (Mia Wasikowska) who goes on walkabout across the Australian desert. Picturehouse’s thriller “The Guest” generated $111,703 across 19 screens.

Another limited release, “Hector and the Search for Happiness” debuted to $46,000 in four theaters. The film follows a psychiatrist (Simon Pegg) who jets around the globe to find the secret to contentment. Relativity Media acquired domestic distribution rights for $1 million.

Kevin Smith’s gonzo “Tusk,” a horror film about a podcaster who gets kidnapped and abused, couldn’t crack the box office top ten. The A24 release made $886,144 from 600 theaters.

But the big story this weekend remains “The Maze Runner” and what it means for its backers.

“Every time you bank on a new franchise you hold your breath and wait for opening weekend to see if your decision  to adapt a popular worthwhile investment,” said Paul Dergarabedian, senior media analyst at Rentrak. “This creates a new franchise for them and that’s what every studio is hoping for.”

For Fox, it’s time to exhale.