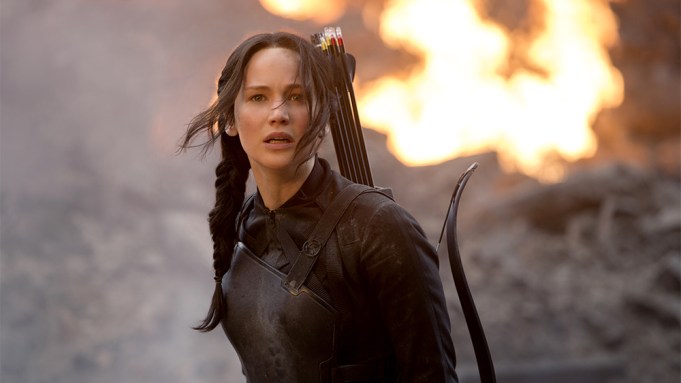 The latest installment in the futuristic franchise earned $123 million across 4,151 locations, besting “Transformers'” $100 million debut from last summer. It’s a massive number — only 14 films in history have earned more — but it’s still a low point for the blockbuster series by a significant margin.

Heading into the weekend, Lionsgate, the company behind the series, said it expected an opening between $130 million and $150 million, but most analysts pegged a debut of $150 million or more. Lionsgate argued that the projections are difficult to make when dealing with a sequel with this level of expectation and name recognition.

“When you look at the massive number we’re dealing with there’s always going to be a variance,” said David Spitz, executive vice president of distribution at Lionsgate.

“It was a tremendous weekend,” he added. “The fifteenth largest in history. It shows the strength of this franchise.”

Globally the film earned $275 million. Its international haul of $152 million from 85 foreign markets bests that of “Catching Fire” by 4%. Lionsgate touted the foreign growth in a release announcing its weekend estimates, noting that its debut figures were a 5% to 19% improvement in most major overseas markets.

“This is another round of North America isn’t the world,” said Phil Contrino, vice president and chief analyst at BoxOffice.com. “If the overseas numbers stay strong it will more than compensate for any dip that happens in North America.”

Some of the discrepancy on the domestic front may be attributed to a lack of Imax screens. The wide screen format has committed to showing “Interstellar” until “The Hobbit: The Battle of the Five Armies” debuts on Dec. 17. Imax added $10.6 million to the first “Hunger Games'” debut and $12.6 million to the second chapter’s opening.

It could also be that after two installments in as many years, “The Hunger Games: Mockingjay – Part 1” didn’t feel as fresh as it once did.

The difficulty for “The Hunger Games” is that it has now entered the pantheon of elite franchises, sitting alongside such heavyweights as James Bond, Batman, “Twilight” and Harry Potter. That adds an extra layer of scrutiny to its performance. Lionsgate’s stock slid 5% Friday to close down $1.76 at $33.25 after it became clear that “Mockingjay – Part 1” would fall short of projections.

Jennifer Lawrence, Liam Hemsworth and Josh Hutcherson all reprised their roles in “Mockingjay – Part 1,” with “Catching Fire’s” Francis Lawrence once again assuming the director’s chair. The film cost $140 million to produce. Stateside, the opening audience was 60% female and 52% under the age of 25. That’s roughly the same demographic breakdown as “Catching Fire’s” opening crowd, which was 59% female and evenly split between ticket-buyers above and below the age of 25.

With “Hunger Games” expected to be a box office juggernaut, studios steered clear of the weekend. There was no other major wide release.

Among holdovers, “Big Hero 6” and “Interstellar” continued to chug along, picking up $20.1 million and $15.1 million respectively. The animated film’s total stands at $135.7 million, while Christopher Nolan’s outer space adventure has earned $120.7 million.

It was a steep fall for “Dumb and Dumber To,” however. The comedy sequel topped the box office charts last weekend, but plunged 62% in its sophomore frame to $13.8 million. The further adventures of Harry and Lloyd have earned $47.5 million, thus far.

Those four films accounted for the bulk of ticket sales, leaving crumbs for the rest of the pack. In fifth place, “Gone Girl” picked up $2.8 million, driving its total to $156.8 million, while “Beyond the Lights” snagged sixth position with $2.6 million, bringing its total to $10.1 million.

Ninth place finisher “Birdman” is nearing $15 million at the box office after padding its box office earnings with another $1.9 million.

Oscar contender “Theory of Everything” cracked the top 10 in its third week of release, expanding from 41 theaters to 140 and earning $1.5 million in the process. It will broaden its footprint to 700 theaters next week.

Though “Mockingjay – Part 1” has a good shot of being the year’s highest-grossing domestic release, the fact that it fell short of its predecessors’ debuts is a disappointment for Lionsgate. It’s possible that some moviegoers stayed away because the final installment was split into two parts. But there’s a silver lining, of course.

“When you look at the grand scheme of things, they’ll still make gobs more money than if they only released one film,” said Jeff Bock, chief analyst with Exhibitor Relations.