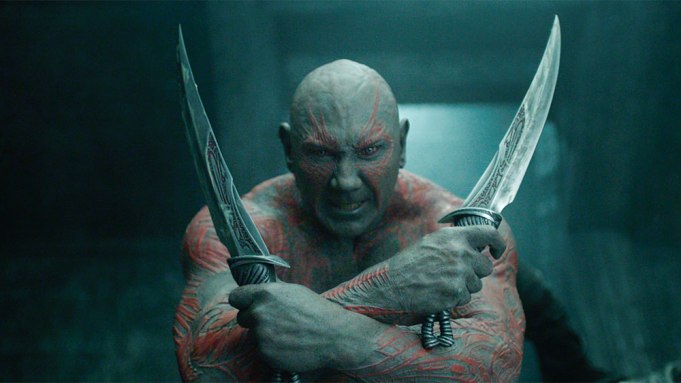 “The Guardians of the Galaxy” touched down with a dazzling $94 million this weekend, proving that Marvel is the new gold standard for movie brands.

That set a new record for an August domestic debut, easily trumping the $69.3 million bow of 2007’s “The Bourne Ultimatum,” and scoring the third biggest stateside opening of the year. Overseas, the film netted an impressive $66.4 million in 42 territories, including Russia, Brazil, Mexico and the United Kingdom. It has brought in $160.4 million worldwide and still has many major markets left to open such as China, Australia, France and Spain.

The Walt Disney release blew past tracking that initially suggested a U.S. debut in the $65 million to $70 million range.

“It’s a testament to the momentum of the brand overall and all of the pieces just coming together in the right way,” said Dave Hollis, Walt Disney Studios’ executive vice president of theatrical distribution.

The distribution chief argued that part of the reason tracking was so off was that Disney saved 40% of its marketing for the final week before the film opened, allowing them to drive awareness for the picture at a critical point.

“We were able to heat things up to white hot levels and use those final days as a call to arms,” said Hollis.

Marvel’s adaptations of its comicbooks have been profitable for years, but following the $1.5 billion success of 2012’s “The Avengers,” their films have reached new heights. “Iron Man 3” hit $1.2 billion, nearly doubling the previous film in the series; “Thor: The Dark World” reached $644.8 million, a 44% improvement on the first God of Thunder film; and “Captain America: The Winter Soldier” is finishing off with $713.2 million globally, a 92% hike from the patriotic warrior’s big screen debut.

Having made $6.3 billion at the box office, since taking ownership of the films with 2008’s “Iron Man,” Marvel has become one of the most consistent hit-makers in Hollywood history. Its record of tapping into the zeitgeist is unrivaled by all save Pixar.

“Guardians of the Galaxy” represented a roll of the dice for the studio and its corporate parent, Walt Disney. It arrived with a production budget of $170 million (plus whatever it cost to market the interstellar heroes from one end of the planet to the other), but without the brand recognition of a Captain America or a Thor. It also debuted in August, traditionally a slower time for popcorn films.

Tapping James Gunn, a tongue-in-cheek auteur best known for low-budget enterprises such as “Slither” and “Super,” and Chris Pratt, the “Parks & Recreation” funny man, were offbeat choices that reaped dividends. The picture was hailed for its sense of humor, with critics rewarding it with a 96% “fresh” rating on Rotten Tomatoes.

“The movie is irreverent, the movie is rebellious and the movie is not a slick Hollywood-produced wrap everything up in bow kind of film,” said Greg Foster, chairman and president of Imax Entertainment.

Blasting off at the tail-end of summer was also a deft move. This summer has been a dreadful one for the movie business, with receipts down nearly 20% from last year’s record-breaker. But that meant that movie-goers were hungry for a broad, exciting, special effects-driven adventure after three months of blockbusters that weren’t.

Domestically, “Guardians of the Galaxy” premiered in 4,080 locations, a new high-water mark for August. It unspooled with all the requisite bells and whistles, with $17 million of its global bounty coming from Imax, $7.5 million of its domestic gross coming from other large-screen premium formats and 25% of its U.S. haul originating from 3D screenings. The opening weekend crowd was 56% male, 26% families and 59% adults, with moviegoers ages 26 to 34 making up the largest sector.

As for the weekend’s other debut, Universal’s James Brown biopic “Get on Up” shook and strutted its way to $14 million — a so-so debut for a modestly priced $30 million piece of counter-programming. Opening weekend audiences were older (90% age 25 and older) and African-American (70%).

With a CinemaScore of A, Universal distribution chief Nikki Rocco hopes the picture will be able to build on word-of-mouth.

“It’s where we thought it would be,” said Rocco. “We’re hoping with the exit poll data we’ve been receiving that the picture finds its way and can be an upscale and African-American choice throughout August.”

“Guardians'” good fortune didn’t leave a lot of room for other contenders. Last weekend’s champ, “Lucy,” slid 57% to $18.3 million, scoring second place at the stateside box office and bringing its domestic gross to $79.6 million. “Hercules,” another holdover, also saw “Guardians” take a bite out of its young adult fan base, dropping more than 60% to $10.7 million and putting its total at $52.3 million. Sliding in for fifth place, “Dawn of the Planet of the Apes” added $8.7 million to its bounty and has now passed the previous film in the franchise, “Rise of the Planet of the Apes'” domestic total, with an $189.3 million stateside haul.

On the specialty film front, Fox Searchlight’s n”Calvary” grossed an estimated $72,000 in a handful of theaters. It will expand next week to between 35 to 40 theaters. Roadside and Lionsgate’s “A Most Wanted Man” enjoyed a nice expansion, moving to 729 screens in its second week and grossing an estimated $3.3 million, while Woody Allen’s “Magic in the Moonlight” widened its footprint from 17 to 65 screens, picking up $770,430 in the process.

But the big story was an unlikely group of space cowboys, who pulverized expectations and became one of the surprise breakout hits in a summer that’s been mostly fizzle and little sizzle.