Box Office: ‘Dawn of the Planet of the Apes’ Rules With $73 Million 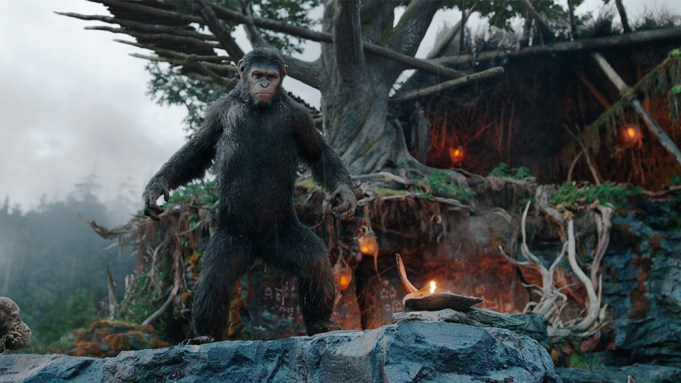 “Dawn of the Planet of the Apes” swung into theaters and snagged an estimated $73 million domestic debut this weekend from audiences looking for a blockbuster with brains.

The 20th Century Fox release unspooled across 3,967 U.S. theaters and was fueled by a glowing reviews, with many critics calling it the summer’s best popcorn film.

“It’s one of those rare times when critics and audiences agree and the confluence created a perfect storm for a phenomenal opening,” said Chris Aronson, president of domestic distribution at 20th Century Fox. “A lot of the movies over the last couple of weeks have been received on the tepid side, shall we say, so the market was ripe for a high quality, visually stunning film.”

Overseas, the film brought in $31.1 million from 26 markets, most of them smaller territories with the exception of Australia and South Korea.

Its U.S. debut exceeds the $60 million bow that tracking suggested it would hit and eclipses the $54.8 million bow of 2011’s “Rise of the Planet of the Apes.” Audiences were 58% male and 65% were 25 years or older, with the film skewing slightly younger than its predecessor. Roughly 8% of its domestic total came from premium large screen formats.

“With the critical response, we think that the older audience that sustained the first one will turn out and that will help give it legs,” said Aronson.

The studio set production costs at $170 million, a figure that the “Apes” sequel should have no trouble recouping when taking into account its international haul. After this weekend, the more-than-4-decade-old “Apes” franchise has passed the $1 billion mark — a just reward for enduring Charlton Heston in a loincloth and Helena Bonham Carter in a monkey suit.

Matt Reeves (“Cloverfield”) directed the sequel, which swapped the bulk of the cast from the previous film, but kept the post-apocalyptic, Bay Area vibe. The picture finds the human survivors of a global pandemic trying to navigate a world where genetically modified simians have the upper hand. Chernin Entertainment produced the film and Fox financed it.

In limited release, Richard Linklater’s “Boyhood” debuted to $359,000 from just five locations in New York and Los Angeles. It also secured the second highest per-screen average of the year behind Wes Anderson’s “The Grand Budapest Hotel” and the highest average of Linklater’s career with $71,800. Filmed over a 12-year period for $5 million, the picture traces one boy’s development into young adulthood — a remarkable cinematic accomplishment that has earned the director rapturous reviews.

“Ever since we debuted the film at Sundance, it’s been such a great trip,” said Jonathan Sehring, president of IFC Films. “Now that the general public is responding to it in a way that, I would not say is beyond our wildest dreams, but is with the same sort of pleasure viewing it that we have, it’s really gratifying.”

The indie label will expand the film into the ten major markets next weekend, representing between 30 to 60 screens, Sehring said.

“We want to keep it slow and not go out on 800 screens in week two or three,” he said. “The awareness is high, the media attention has been tremendous, and the word of mouth in the Twitter-sphere and social media universe is outstanding, so we’re going to continue to build on this.”

Internationally, “Boyhood” has opened in four territories including Germany and the United Kingdom and has picked up $3.2 million abroad. Universal is distributing the film overseas, while IFC handles the domestic rollout.

“Transformers: Age of Extinction” slid into the No. 2 spot on the Stateside box office charts, picking up $16.5 million and pushing its domestic total to $209 million. Internationally, the film continues to be a monster, bringing in $102 million and goosing its foreign tally to $543.5 million.

It continues to perform better in China, where parts of it were filmed, than in the U.S., adding another $25 million from the People’s Republic and putting its record-setting bounty from the country at $262.6 million to date. Because of trade agreements, Paramount will only get 25% of the box office receipts, a smaller fraction than less protectionist countries.

In its second week of release, “Tammy” held well, dropping 40% to $12.9 million, despite poor reviews and a C+ CinemaScore. The film has now earned $57.3 million after two weeks in theaters. Although some coverage has portrayed the film as the death knell for Melissa McCarthy’s brand of humor and its finale numbers will fall short of “Identity Thief” and “The Heat’s” hauls, it’s worth noting the New Line release has nearly tripled its $20 million production budget.

“She really has a core audience that loves her and in those markets the movie is playing really well and enjoying a terrific hold,” said Dan Fellman, president of domestic distribution at Warner Bros.

Fellman said the film is performing strongly in the South and Midwest and expects the picture to top out at $90 million domestically.

Relativity’s “Earth to Echo” also had good legs, falling 34% to $5.5 million in its second frame and putting its total at $24.6 million. The $13 million production seems to be benefiting from a lack of family product in the marketplace.

Sliding in at the fourth and fifth spots on the domestic chart were “22 Jump Street” with $6.7 million, propelling its total to $172 million, and “How to Train Your Dragon 2” with $5.9 million, pushing its take to $152 million.

Then there were the limited releases. In its third week in theaters, the Weinstein Co.’s “Begin Again” picked up $2.9 million from 939 locations, pushing its total to $5.3 million, while Dinesh D’Souza’s politically charged “America” added $2.4 million to its $8.3 million bounty, a testament to the commercial power of provocation.

Not all the numbers are in, but analysts expect that the summer box office will continue to lag behind last year’s record-setting figures. This weekend was off nearly 25% from the same period 2013, when “Pacific Rim” and “Grown Ups 2” debuted in theaters, and the overall U.S. box office is down 5.2%.

“You need those to fill out the summer and create a more robust slate,” said Phil Contrino, chief analyst and vice president of BoxOffice.com. “You need movies like that to connect. You can’t just rely on tentpoles.”