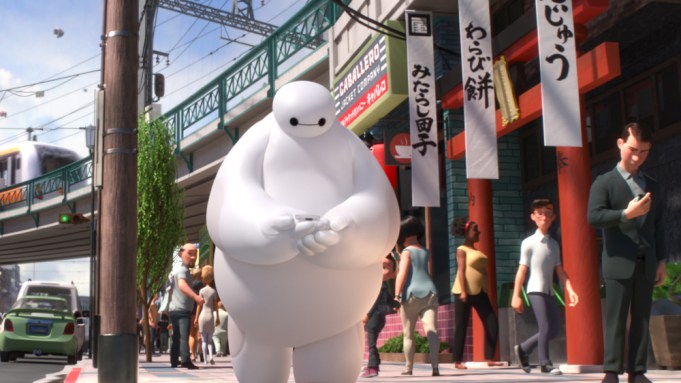 Family audiences lifted “Big Hero 6” over “Interstellar” and the fanboys and girls who turned out in force for Christopher Nolan’s space adventure in one of the fiercest box office match-ups of the year.

“Big Hero 6” topped the charts with $56.2 million from 3,761 locations, continuing Walt Disney Animation Studios’ recent hot streak. After the success of “Frozen” and “Wreck-It Ralph,” the division is no longer the also-ran to Pixar, its corporate cousin.

“They have been on quite the roll,” said Dave Hollis, Disney’s distribution chief. “They’re in a creative renaissance.”

Despite a formidable dueling partner in “Big Hero 6,” “Interstellar” scored a sizable $50 million from 3,561 locations, according to studio estimates. If “Interstellar’s” numbers hold, it will mark only the fourth time in history that two films have debuted to more than $50 million at the domestic box office, and each one of the previous occasions took place in the summer, when ticket sales are at their highest.

“It’s good for the marketplace,” said Phil Contrino, vice president and chief analyst at BoxOffice.com. “The programming this weekend was very intelligent, and we didn’t have a lot of that this year. Neither movie hurt the other one. They were both operating in separate camps and they both found an audience.”

Both films carry massive $165 million pricetags, so in order to turn a profit, they must resonate with viewers across the globe and to demonstrate staying power. Nolan’s “Inception,” another trippy blockbuster, managed to become one of 2010’s biggest hits because it was a box office Energizer Bunny, holding on to first place for three consecutive weeks and dropping just 32% and 35% in its second and third weekends.

Likewise, Walt Disney Studios’ recent global blockbuster “Frozen” refused to loosen its hold on audiences. Despite opening over Thanksgiving, it continued to generate impressive returns through February. Having a ubiquitous power ballad like “Let It Go” didn’t hurt matters.

Paramount Pictures released “Interstellar” domestically, while Warner Bros. handled the foreign rollout. “Interstellar” kicked off in a few hundred Imax and film projection locations on Tuesday before expanding on Thursday evening. Its total is $52.1 million, with Imax comprising $13.4 million or 26% of its opening weekend gross, while other premium large format screens were responsible for 10.5% of that figure. Over an hour of “Interstellar” was shot using Imax cameras, making it the preferred venue for cinephiles and Nolan aficionados. By racking up more than a quarter of its earnings in Imax, “Interstellar” gave the wide screen company the largest percentage of box office it has ever generated for a first-run release.

The audience was fairly evenly split among the genders (52% male vs. 48% female), but skewed older with ticket buyers 25 and older accounting for 75% of sales.

“Interstellar” stars Matthew McConaughey, Anne Hathaway and Jessica Chastain and centers on a group of space explorers who leave an ecologically devastated Earth to travel through wormholes in order to find a new home for humanity. Popular and critical response has been polarized — some hail it as visionary, others fault it for being ponderous.

Paramount Pictures vice chairman Rob Moore likened the divided reactions to those drawn by “Wolf of Wall Street” and Nolan’s “Inception,” both of which were commercially successful despite passionate detractors.

“When you look at the way people talk about this movie, you have some reviews that didn’t like it and then you have some who think it’s one of the best, if not the best, science-fiction movie ever made,” he said. “It’s that type of polarizing opinion that leads to conversation, and people want to see the movie so they can be part of that conversation.”

“Big Hero 6” has enjoyed warmer reviews (a 91% “Fresh” rating on Rotten Tomatoes versus a 73% mark for “Interstellar”). Loosely based on a Marvel Comics series of the same name, the film follows a science prodigy and his lovable robot as they stumble upon a criminal conspiracy. The movie was co-directed by Don Hall (“Winnie the Pooh”) and Chris Williams (“Bolt”), the voice cast features Scott Adsit, Damon Wayans Jr. and Maya Rudolph.

Opening weakend audiences were evenly split between males and females, with 36% of the crowd coming in under age 12. Hollis said he was pleased that 20% of the audience was between 26 and 34 and 16% was between 35 and 49, believing it positions the film well for the upcoming holiday season.

“It works with older audiences,” he said. “It’s not just families and kids.”

The robust grosses for “Interstellar” and “Big Hero 6” didn’t result in too many leftovers. “Gone Girl” scored third place with $6.1 million, bringing its total to $145 million, while “Ouija” captured fourth place with $6 million, pushing its earnings to $43.5 million.

The Weinstein Company’s “St. Vincent” continued to be one of the rare indies to reap financial rewards of late. The Bill Murray comedy added $5.7 million to its $27 million haul, which put it in fifth place, while Sony Pictures’ “Fury” rolled into sixth position with $5.5 million, propelling it to $69.3 million domestically.

In limited release, Focus Features bowed Oscar hopeful “The Theory of Everything” in five locations across New York, Los Angles, and Toronto. The biopic about astrophysicist Stephen Hawking and his relationship with his first wife picked up $206,000, for a per-screen average of $41,400. Eddie Redmayne is exciting serious awards buzz for his turn as Hawking and the film is viewed as a Best Picture contender, which could help “Theory of Everything” capture audience attention as it widens its presence in theaters. It will broaden its footprint to 40 runs next weekend in 18 North American markets and is plotting a major expansion for Thanksgiving week.

“It’s an emotional story about a great love that these two people had for each other and the sacrifices and ordeals they went through,” said Jim Orr, president of distribution at Focus Features. “We think word-of-mouth is going to be tremendous.”

The Edward Snowden documentary “Citizenfour” continued to impress, earning $207,834 from 59 screens, for a $3,523 per-screen average. The Radius-TWC release has picked up $667,293 after three weeks.

“Birdman” continued to fly high on gonzo wings. The Fox Searchlight backstage comedy doubled its screen count to 462, earning $2.3 million in the process. In four weeks, it has earned $8.1 million.

Going into the weekend, some box office prognosticators gave the edge to “Interstellar,” but they were ignoring history. In the three previous instances where two films have bowed to more than $50 million — “Monsters University” versus “World War Z” in 2013, “Madagascar 3: Europe’s Most Wanted” versus “Prometheus” in 2012 and “Wanted” versus “WALL-E” in 2008 — the animated film has prevailed. This weekend, “Big Hero 6” was Goliath.

“When you open against a family, animated movie, any other movie is going to be David,” said Paul Dergarabedian, senior media analyst at Rentrak.