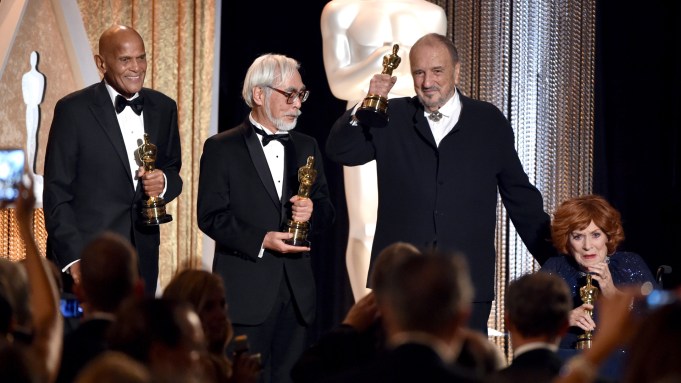 Harry Belafonte gave one of the all-time great acceptance speeches at Saturday night’s Governors Awards, citing Hollywood’s often-shameful power to influence attitudes, and challenging the heavy-hitters in the room to instead create works that allow global audiences “to see the better side of who we are as a species.”

The performer, receiving the Jean Hersholt Humanitarian Award, pulled no punches, and his words were all the more effective because of the soft, even tone in his voice and the cautious optimism that concluded his speech.

The occasion was the sixth annual Governors Awards, at the Ray Dolby Ballroom at Hollywood & Highland, an annual gathering that always mixes a celebration of Hollywood’s past, some words of encouragement to the room’s artists, and a heavy dose of awards-schmoozing.

The three recipients of Honorary Oscars — Maureen O’Hara, Hayao Miyazaki and Jean-Claude Carriere — all provided moments that were touching and charming. But, concluding the evening with a long and electric speech, Belafonte took things to a whole other level.

He reminded the crowd about “Birth of a Nation,” the early “Tarzan” films (depicting “inept, ignorant Africans”) and “Song of the South,” as well as the industry’s cowardice during the McCarthy hearings. He also referred to the industry’s decades-long treatment of Native Americans in films, “and at the moment, Arabs aren’t looking so good.” The industry doesn’t like trouble-makers and “on occasion, I have been one of its targets.”

But he said that “today’s harvest of films yields sweeter fruit,” citing “Schindler’s List,” “Brokeback Mountain” and “12 Years a Slave” as examples. He also thanked such inspirations as Langston Hughes, James Baldwin, Eleanor Roosevelt and Paul Robeson, quoting the latter’s statement that “Artists are the gatekeepers of truth” as well as the radical voice of civilization.

He then called Sidney Poitier to the stage, recognizing the actor’s role in changing public attitudes toward blacks. And he added that he hopes things will improve this century: “Maybe it could be a civilization game-changer.”

The first recipient of the evening was Maureen O’Hara, now 94, who came onstage in a wheelchair and charmed everyone by singing a few lines of “Danny Boy.” She read her thanks and when her escort asked her to stand and take a bow, she said “Oh, no!” saying she intended to stay another 10 minutes onstage and tell her life story. She got partway through it, talking about growing up in the FitzSimons family in Ireland, but eventually her mike was removed and she exited the stage in a bittersweet moment.

Hayao Miyazaki, speaking with a translator, said he feels “lucky to be part of the last era when we can make films with paper, pencils and film.” Introducing him, John Lasseter hailed the Japanese filmmaker as one of animation’s greats, along with Walt Disney, and said Miyazaki has directed 11 animated features, more than anyone else in history.

Jean-Claude Carriere, who boasts 139 credits, said he was particularly pleased that an award was given to a scripter. “Very often screenwriters are like shadows passing through the history of cinema,” he said, accepting the award on behalf of all his fellow scribes throughout the world.

Clips of all the speeches are at the Academy of Motion Picture Arts & Sciences website, oscars.org.

Academy president Cheryl Boone Isaacs opened the evening by saluting the four honorees, who represent “the amazing global diversity of our industry.” (Later, Chris Rock got off the evening’s best one-liner by congratulating Boone Isaacs on her work: “It’s nice to see a black president that America still likes.”)

Among those in attendance were Academy CEO Dawn Hudson, the board of governors, Oscarshow producers Craig Zadan and Neil Meron, studio honchos and a heavy dose of industry creatives. Megan Colligan, Paramount’s president of worldwide distribution and marketing, summed up the mood by saying “There’s always a real sense of community.”

That’s true even among the many awards hopefuls that were working the room. The event has become a key campaign stop for contenders, a chance to rub elbows with Academy voters and journalists.

There was a lot of cheery schmoozing. Producers Nora Grossman and Ido Ostrovsky (“The Imitation Game”) chatted with Bruna Papandrea (“Wild”), while animation directors Dean DeBlois (“How to Train Your Dragon 2”) palled around with Chris Williams (“Big Hero Six”).

Producer of the event was Reginald Hudlin.