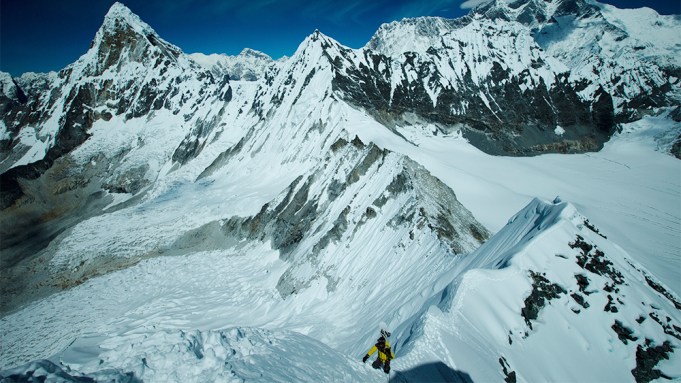 Co-directed by Jeremy Jones — a ten-time Snowboarder magazine Big Mountain Rider of the Year — plus his brothers, TGR founders Steve and Todd Jones, “Higher,” has its European premiere at the San Sebastian Festival on Sept. 24.

A feature, it captures what Jones describes as his “pinnacle achievements,” such as riding a stunning line down a face in the little explored Eastern Alaska Range, to getting firmed up, unable to snowboard down or climb up, on an unclimbed, and un-ridden spine wall not far from the soaring summit of the 21,400 Shangri-La in Nepal.

TGR’s “Further,” the second film in the feature film trilogy, following on “Deeper,” earned Jones a 2013 National Geographic Adventurer of the Year nod.

“I have set up my life around finding and riding the planet’s best mountains for snowboarding, and ‘Higher’ represents the pinnacle achievements in my life as a snowboarder,” says Jeremy Jones. “As much as I appreciate all the accolades I have received in snowboarding, these lines mean the most to me. They are my lifetime achievement awards.”

It is the human story in ”Higher” that predominates in the trailer, lending depth — as action sports movies, or many of the very best of them, add character-driven drama to adrenalin rush.

“Higher” captures Jones’ snowboarding journey from hiking Cape Cod’s Jailhouse Hill as a child to his leaving tracks on signature lines in the close-to-home playgrounds, and turning his back on possible Olympic snowboard competition glory and quick-fix helicopter-transport to the summits of unclimbed peaks. It also explores his doubts, as a family man with children, about ever pushing to the next level.

“It’s not about scaling the highest peak, the descent, it’s about the journey, the people you meet,” Jones reflects in the “Higher” trailer.

Also, it’s the sense of journey which gives “Higher,” which world premiered Sept. 6 in Squaw Valley, California, as with many top action sports movies, their emotional resonance and ultimate sense.