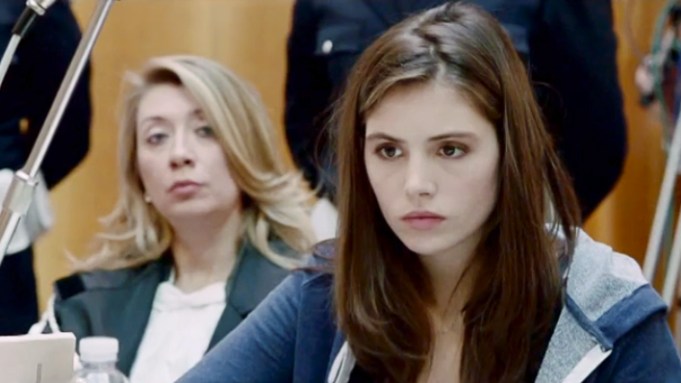 LONDON — Variety has been granted exclusive access to a clip from the promo reel of Michael Winterbottom’s psychological thriller “The Face of an Angel,” which is inspired by the Amanda Knox case. It is the first glimpse of the film, which is in post-production, to be shown anywhere.

The pic, which stars Daniel Bruhl, Kate Beckinsale and Cara Delevingne, is set to be one of the hottest properties at the European Film Market in Berlin, where sales agent WestEnd Films will be showing the film’s promo reel to buyers for the first time.

The film is produced by Revolution Films alongside BBC Films, Multitrade and Ypsilon Films. Lipsync and Vedette Finance are also executive producers and partners on the project.

The film is inspired by the book “Angel Face: Sex, Murder and the Inside Story of Amanda Knox” by the American journalist Barbie Latza Nadeau, and uses a fictional adaptation of the tragic story of the 2007 murder case in Umbria, Italy, and ensuing media circus as a springboard for a wider investigation of society’s fascination with violence.

Here’s the synopsis: The murder of a British student in Tuscany leads to the trial and conviction of her American flat mate and Italian boyfriend in controversial circumstances.

The public interest around the case attracts once successful, but now struggling filmmaker Thomas (Bruhl), to be commissioned to write a film, “The Face of an Angel,” based on a book by Simone Ford (Beckinsale), an American journalist who covered the case. From Rome they head to Siena to research the film.

Thomas has also recently separated from his wife in a bitter divorce and left his 9-year-old daughter in Los Angeles. As his life unravels, he becomes increasingly disturbed by the dark medieval atmosphere surrounding the case and begins to fall into his own personal hell.

Just as Thomas is about to hit rock bottom, he meets British student Melanie (Delevingne), with whom he begins an innocent relationship. This is a beautiful, unrequited love where Melanie provides solace to him and acts as a guide to his own heart. Thomas starts to question what is more important to him, solving an unsolvable crime and writing the film, or returning back to the daughter he has left behind.