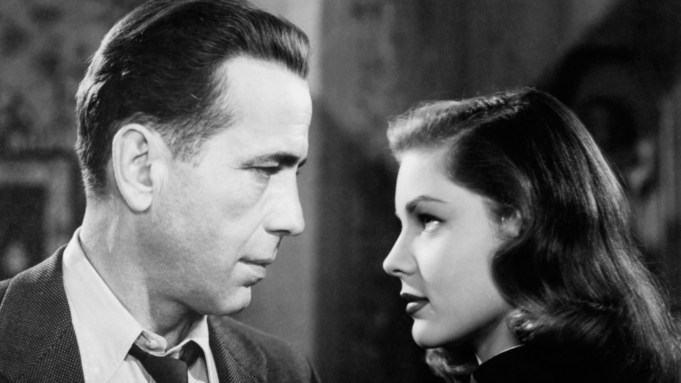 Everyone is entitled to a favorite screen pairing – Taylor and Burton, Hepburn and Tracy, R2D2 and C3PO – but they simply don’t get any better than Bogart and Bacall.

Lauren Bacall – the surviving half of that duo for 57 years – has died at the age of 89. But her legacy as one of the great actresses has long been secured, both for the work she did with Humphrey Bogart – who she met, and soon married, via their first collaboration, “To Have and Have Not” – and what came after, not just in movies but on stage and television.

Still, any remembrance of Bacall has to begin with her roles opposite Bogart, a pairing so terrific and seemingly right that it tended to obscure the pesky details, like their 25-year age difference, or the fact he was still married when their by all accounts torrid affair began.

Bacall’s alluring looks – there was almost a feline quality to them – and distinctive voice obviously helped define and establish her stardom. Yet what made her so iconic was the nature of these characters – and the rat-a-tat, inordinately suggestive patter she and Bogart delivered with such seeming ease, managing to be by turns sexy, funny and dramatic.

Directed by Howard Hawks, “To Have and Have Not” set the standard – there are so many good lines it’s hard to know where to begin, although “You know how to whistle” is certainly the most famous. (A less celebrated but no-less-memorable sequence has Bacall’s character getting irritated when she thinks another woman is trying to seduce Bogart’s Harry, coyly batting her eyelashes at him.)

The movie’s success prompted the studio to adjust “The Big Sleep” – a crime drama where the whodunit mattered far less than the atmosphere – in order to accentuate and expand Bacall’s role. A key scene was added in which the two not-so-subtly flirt using horseracing terminology.

They were followed by the underappreciated “Dark Passage” (which features a kind of gimmick, inasmuch as you don’t see Bogart’s face until well into the movie); and “Key Largo,” with Bogart playing the reluctant war hero, Bacall as the widow of his fallen comrade and Edward G. Robinson – never better – as the sadistic mobster who holds them hostage.

All told, the two made four movies together in an astonishing five-year span. But those films play – and play and play – holding up extraordinarily well no matter how many times one views them.

Bogart died in 1957, and Bacall went on to other relationships (Frank Sinatra, Jason Robards) and roles. Two worth seeing – and thanks to cable, not hard to find –came in the 1970s: “The Shootist,” in what turned out to be John Wayne’s final screen role; and “Murder on the Orient Express,” a star-studded affair, with Albert Finney as detective Hercule Poirot.

Nevertheless, the Bogart-Bacall films are the ones that belong in the vault, the ones for the ages. In a 2011 Vanity Fair interview, Bacall acknowledged as much, saying with a note of resignation, “My obit is going to be full of Bogart, I’m sure.”

But that doesn’t diminish in any way the magic that the two created together. And no, Slim, that isn’t just whistling.