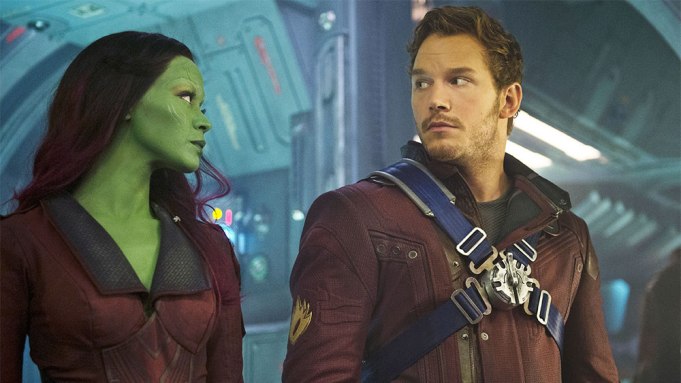 Hollywood didn’t have much to celebrate this Labor Day. The holiday is traditionally a slow one at the box office, and this one was no exception, providing one final death rattle on a summer that was largely D.O.A.

In its fifth week of release, “Guardians of the Galaxy” prevailed over two modestly budgeted newcomers, “November Man” and “As Above, So Below,” to hold on to the top spot on domestic box office charts with $22.2 million over the four-day holiday. Its domestic total now stands at $280 million and the film will likely hit $300 million stateside by the time it ends its run.

For the major studios, back to school time represents a reprieve. The summer box office will close down nearly 15% from last year’s record breaker, depressing year-to-date comparisons, as well. Currently, the 2014 domestic box office is off more than 5% from 2013, and while Labor Day has never been an occasion for boffo ticket sales, this year was down 16% from the previous holiday.  Final numbers won’t be calculated until Tuesday, but it appears that this summer will be the worst in eight years.

SEE ALSO: How Marvel Guards Its Properties But Isn’t Afraid to Take Chances With Its ‘Galaxy’

The new releases this weekend were indifferently received, with “As Above, So Below” faring slightly better, nabbing fifth place with $10.3 million from 2,640 locations over the four-day weekend. “November Man” slid into sixth position with $10.2 million from 2,774 theaters. The good news is both were inexpensive propositions.

Legendary Pictures paid a mere $5 million to produce “As Above, So Below,” a tale of treasure hunters in the Paris catacombs, so the picture could end up being profitable after theater owners take their cut and promotional costs are taken into account.

“It’s where we expected it to be,” said Nikki Rocco, head of domestic distribution at Universal. “It’s a micro-budgeted film that found its core audience.”

“As Above, So Below” played equally well to women and men, with Hispanics making up the largest share of its audience with 34%; 65% of ticket buyers were under 25 years old. The film is the first release in Legendary’s new distribution pact with Universal. It was previously housed at Warner Bros.

Likewise, Relativity Media only shelled out $3 million to distribute “November Man” Stateside. The picture about a retired CIA agent (Pierce Brosnan) who becomes embroiled in a political conspiracy cost $20 million to produce. The film skewed older,  with 83% of the opening weekend audience clocking in at over the age of 25 and was predominantly male (55%).

It doesn’t constitute as a new release, but Columbia Pictures re-released “Ghostbusters” in honor of its 30th anniversary this weekend, and nostalgia for all things Stay Puft Marshmallow Man, contributed to $2.2 million in ticket sales from 784 locations. A spiffy new Blu-ray hits stores on Sept. 16 — sadly, Bill Murray’s attendance at your next house party or kickball game is not one of the extras.

The rest of the top five box office slots were filled by holdovers, with “Teenage Mutant Ninja Turtles” taking advantage of the weaker competition to nab runner-up position with $15.7 million from 3,543 locations.

Among art house releases, Sony Pictures Classics’ World War II drama “The Notebook” picked up $4,027 from two scenes over the four-day period, and Open Road’s “Chef” crossed $30 million domestically after expanding from roughly 100 to 757 locations for one last hurrah. In its seventh week in theaters, IFC’s “Boyhood” added more than $2 million to the pot, bringing its domestic total to just under $20 million.

Perhaps the biggest surprise is the success of “Cantinflas,” a biopic about the Mexican comic and co-star of “Around the World in 80 Days.” The film arrives courtesy of Pantelion Films, a joint venture between Lionsgate and Mexican media corporation Grupo Televisa that produces films for Latino audiences. It picked up $3.3 million from 382 U.S. locations. Ignore this audience at your own peril, Hollywood.

Despite the dreary results, obituary writers should hold off on drafting their panegyrics for the movie business. After all, 2015 brings sequels to “Star Wars,” “The Avengers,” “Jurassic Park” and James Bond, a greatest hits collection that should lure moviegoers back to theaters.

“Hollywood doesn’t seem to be panicking because it knows this is just temporary,” said Contrino. “The sky is not falling. The exhibition industry is not doomed.”